SKA reach Western Conference final for the first time in KHL history, and its series victory over Dynamo laid a few of the club’s ghosts to rest.

Two seasons running St. Petersburg’s hopes of lifting the big prize were dashed by the Moscow team, and twice Dynamo went on to win the cup itself. So this series had more than a place in the Conference final at stake – it was about overcoming the weight of history.

So when Evgeny Dadonov grabbed the winning goal in overtime, snapping a 2-2 tie and securing a 4-1 series triumph, the celebrations mingled joy and relief.

Dadonov struck in the 10th minute of the extras, presented with an easy finish after neat passing between Vadim Shipachyov and Artemy Panarin to end Dynamo’s season.

Going into the game with a 3-1 lead in the series, SKA knew that progress was within touching distance and produced a perfect start to the game. Just 37 seconds in, Shipachyov opened the scoring, firing home at the far post after slick passing between Roman Cervenka and Ilya Kovalchuk.

That immediately ramped up the pressure on Dynamo and gave a huge lift to the home crowd, helping to calm any nerves as the visitor began to get the upper hand in terms of territory later in the opening session. However, there were relatively few good chances to tie the game before the first intermission.

The middle stanza was goalless, although Roman Rukavishnikov rattled the inside of Alexander Sharychenkov’s post early on. It wasn’t until the third period that Dynamo got on the mark. The Blue-and-White power play has been less than dynamic in this year’s play-off, but it worked this time: Maxim Karpov’s shot was saved but Dmitry Kalinin was out of luck as he pushed the puck into his own net under pressure from Alexei Tereshchenko. 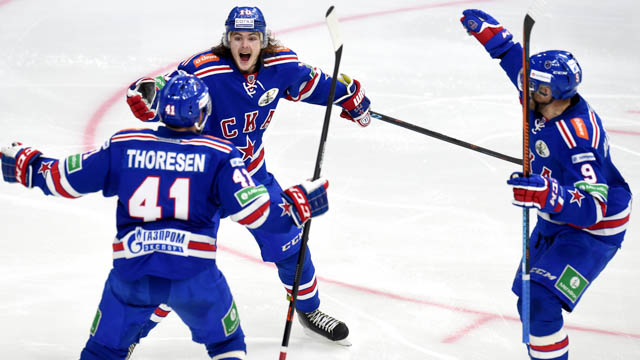 SKA went back in front after just 40 seconds, though: Viktor Tikhonov’s pass found Anton Belov, and his one-timer squirmed through Sharychenkov’s five-hole to get SKA back on track for the final. Dynamo, though, refused to buckle, and tied it up yet again through Sergei Soin. He found an almost open goal after Yegor Dugin’s hopeful shot saw Mikko Koskinen give up a huge rebound.

Jimmie Ericsson almost put SKA back in front straight away, and Tikhonov almost snatched a dramatic winner off a Patrick Thoresen pass in the last seconds, but the game was destined to go to overtime.