CSKA moved to within one game of the Western Conference final thanks to a powerful performance on its power play in Helsinki. All three of the Army Men’s goals came on a one-man advantage, while the Red-and-Blue PK was also at its best to stifle a 5-on-3 in the first period.

The opening goal came in the 10th minute while Jani Rita was sitting out an interference minor. The time was almost up when Simon Hjalmarsson sprung off the boards, took full advantage of the extra space in the end zone and homed in on the net before firing upstairs with the defense in tatters.

Then came that 5-on-3 Jokerit power play with CSKA surviving 30 seconds of a two-man deficit. The video ref also came to the visitor’s aid, chalking off a Tommi Huhtala effort that crept inside the post off a Ville Lajunen pass. At full strength CSKA’s defense was even more effective: Jokerit was limited to just 17 shots on target all night and apart from a flurry early in the third, including a chance that Linus Omark might normally have converted, the home team was struggling to really test Stanislav Galimov.

At the other end CSKA was more clinical and scored twice more on the power play. As the game became stretched in the closing stages Hjalmarsson added his second of the night and his fourth of the series, although it was largely down to a Denis Denisov piledriver from the blue line that went through Henrik Karlsson before Hjalmarsson touched it over the line. Igor Grigorenko added a third, continuing his record of scoring in every game against Jokerit this post-season and stretching his goal sequence to five games. Jan Mursak’s assist on that one gave him his third point of the night as CSKA moved to within touching distance of a place in the next round. 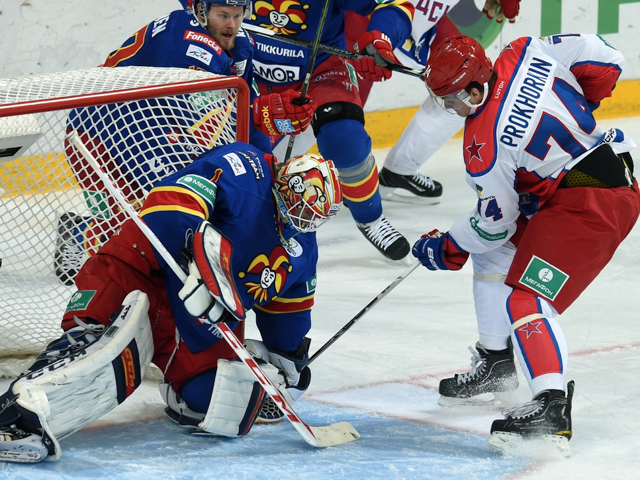