Sibir grabbed an overtime win in Magnitogorsk to take a 3-1 lead in this series and move to within a single game of reaching its first ever Conference final – while the defending champion Metallurg is on the brink of relinquishing its crown.

It took just 22 seconds of the extras to snap a 2-2 tie: Rinat Mamashev got the all-important marker with the first and only shot of the added period. The defenseman, making only his second post-season appearance for Sibir, collected the puck on the blue line, stepped forward and let fly while Metallurg goalie Vasily Koshechkin was screened by a Sibir player on the slot and had no chance of stopping Mamashev’s effort.

Sibir came into the game without two key players – goalie Alexander Salak and forward Alexei Kopeikin were both suspended – and that seemed to tip the balance in Metallurg’s favor before the puck was dropped. However, if a supposedly-weakened Novosibirsk team was scripted to fade out of this game the memo clearly didn’t reach Andrei Skabelka’s locker room.

The first period was all about the visitor from the moment Dmitry Kugryshev put Sibir 1-0 up in the second minute. The game was directed firmly towards Koshechkin’s goal, with Magnitka’s mighty offense struggling to get shots on stand-in goalie Nikita Bespalov. Things got better for the visitor when Patrick Hersley converted a power play in the 17th minute, making it 2-0 on the night and putting Sibir within sight of a 3-1 series advantage to take back home on Thursday.

But that Magnitogorsk offense can’t be overlooked. The team mustered just six shots in the first session, but the last of them, in the 19th minute, found the target. Inspirational captain Sergei Mozyakin carved out of the opportunity; Danis Zaripov put it away. 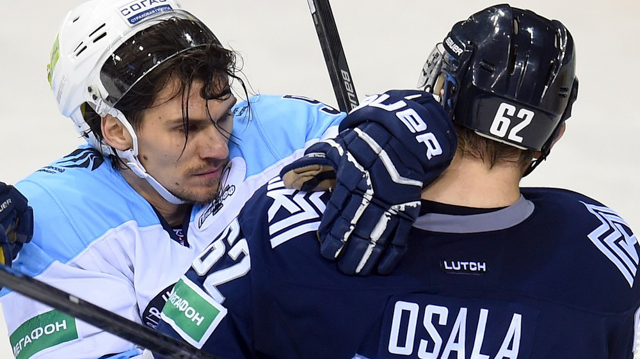 The shape of the game was transformed: Sibir’s first period dominance was mirrored by Magnitka’s response in the second, but Bespalov kept the host at bay until the 37th minute when that Mozyakin-Zaripov combo struck again to tie the game.

The third period was much more close-fought; there were fewer shots on either net and neither team managed to gain the edge as the action headed towards overtime and Mamashev’s decisive contribution.