Anders Nilsson came within two minutes of his third shut-out in a row to help Ak Bars tighten its stranglehold on this Eastern Conference semi-final series. By the time Kirill Semyonov scored on the Swede deep in the third the goalie had gone unbeaten for 178 minutes and 79 shots. In the time since Sergei Shirokov’s overtime goal back in game one put Avangard in front in the series, Ak Bars had turned that deficit into a 3-1 advantage and now stands just 60 minutes away from progress to the Conference final.

The Kazan team took the lead early on with Mikhail Glukhov getting his first post-season goal in the second minute, getting on the rebound after his own shot came back off the boards and deceived Denis Kostin on his recall to the Avangard starting line-up. At the other end Avangard mustered a miserly two shots on Nilsson’s net, a statistic that underlined the home team’s problems in making an impression early in the game.

After the intermission the host did raise its game, forcing some impressive saves out of Nilsson, but it was Ak Bars that took control of the scoring. Glukhov fed former Avangard man Sergei Kostitsyn for a one-timer to double the lead and defenseman Stepan Zakharchuk added his second goal of the series just after midway in the game. 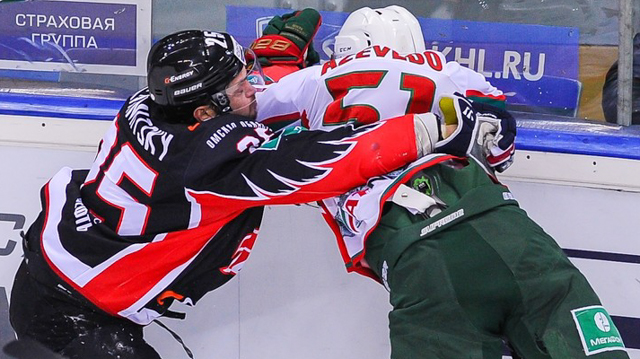 But the victory – and Ak Bars’ commanding lead in the series – was largely down to the form of goaltender Nilsson, unbeaten in almost 180 minutes of hockey and proving once again that in play-off hockey a goalie in form represents more than half a team.