Bringing this series onto home ice with a 0-2 deficit to make up demanded a strong response from the defending champion – and Metallurg delivered with a powerful performance. The game was settled in the first period with three unanswered goals and the expulsion of visiting goalie Alexander Salak for a high hit that sparked a fight with Maxim Yakutsenya; the rest was largely window-dressing.

It took just 67 seconds for Magnitka to forge ahead. Tim Stapleton scored off his team’s first attack, firing home Tim Brent’s pass from behind the net. Sergei Mozyakin soon made it 2-0 on the power play, assisted by a smart pass from Chris Lee and soon Salak’s brawl took the starting keeper out of the game. His replacement, Nikita Bespalov conceded another power play goal from Mozyakin before the first intermission and the outcome of the game was already more or less clear. 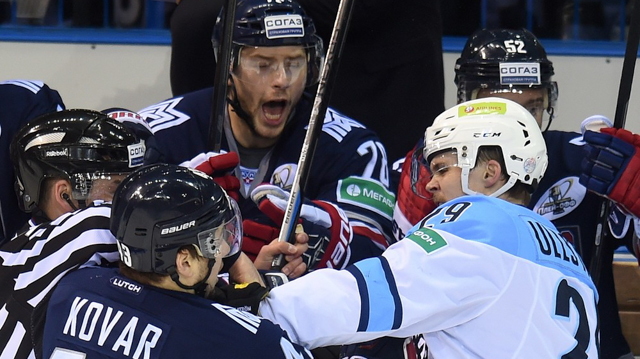 David Ullstrom pulled one back for Sibir early in the second but Brent responded within seconds to reinstate that three-goal advantage and the third period followed a similar pattern as Dmitry Monya’s power play goal was quickly answered by Jan Kovar, with Mozyakin’s assist taking him to three points for the game.