Two goals in the third period from Tommi Huhtala gave Jokerit a vital victory as the Western Conference semi-final moved to Helsinki.

CSKA marched to the Baltic with a 2-0 series lead and a 100% post-season record but faced a Finnish team roared on by a passionate crowd and determined to play its way back into contention. That set the stage for a contest that was full of thrust and parry on offense for much of the first two sessions, but which finally turned anticipation into excitement in the 35th minute.

The drama started with a penalty against CSKA for having too many men on the ice. The visitor was unruffled, breaking out on the PK for Jan Mursak to feed Simon Hjalmarrson to open the scoring with a short-ended effort. However it took just 30 seconds for Jokerit to tie it up thanks to Ville Lajunen.

That paved the way for Huhtala’s decisive contribution. In the 46th minute he made it 2-1, wrapping up a lightning break to turn in Eetu Poysti’s pass at the far post. Two minutes later he was on the mark again, scoring off the rebound from a Topi Jaakola shot from the point.

CSKA gambled early, withdrawing goalie Kevin Lalande with more than three minutes to play, and got a partial reward thanks to yet another goal from Igor Grigorenko. He scored twice to inspire CSKA’s comeback win in Game 1 of the series, but his hopes of a repeat here were scuppered moments later when Bogdan Kiselevich took a penalty for CSKA, easing Jokerit’s efforts to run down the clock. 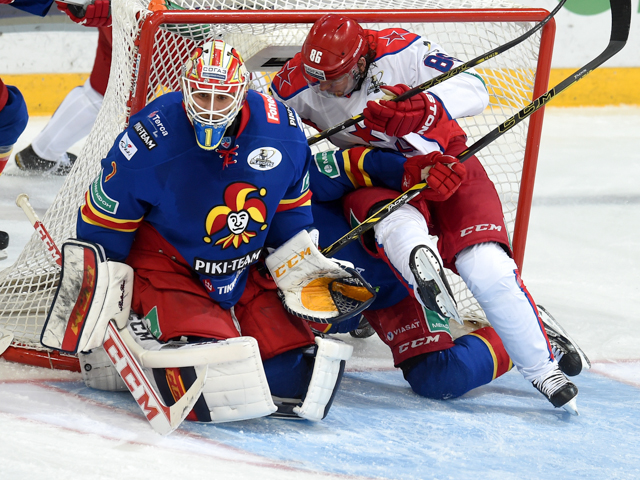