SKA smashed Dynamo to take a commanding 3-1 lead in the series and move to within a single victory of the Western Conference final.

Two goals for Patrick Thoresen and goal+assist returns for Vadim Shipachyov and Evgeny Dadonov led the St. Petersburg team to a decisive win in Game 4 on a night when everything went wrong for the Blue-and-Whites.

The home team’s problems went from the painful – injuries to defenseman Maxim Solovyov and goalie Alexander Lazushin – to the farcical as Alexei Tsvetkov skated into the referee to allow Thoresen a free shot for his second and SKA’s fifth. 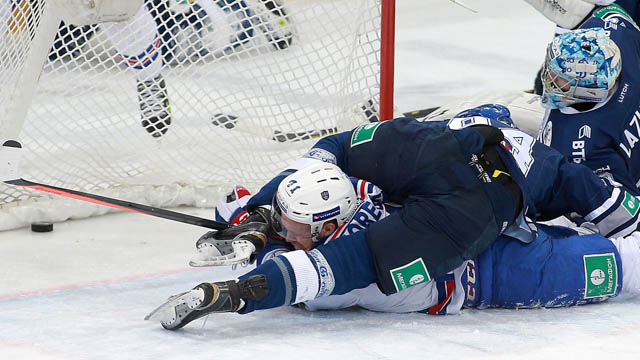 Thoresen started the rout with the opening goal in the eighth minute. Tony Martensson’s shot slithered under Lazushin’s pads but couldn’t make it to the line; Thoresen’s outstretched stick slid in to complete the goal. Dynamo found an answer for that, with Yegor Dugin deflecting a Janne Jalasvaara shot past Mikko Koskinen, but that was as good as it got for the host.

Shipachyov put SKA back in front early in the second with a well-taken goal, firing in a one-timer off Dadonov’s pass and 30 seconds later Ilya Kablukov shrugged his way free of the attentions of Alexei Tereshchenko and got to the net to force a shot below Lazushin. The goalie didn’t make it to the end of the period, leaving the ice in the 40th minute after getting caught between the post and a speeding Anton Burdasov.

The third period started with SKA on the power play and the visitor took full advantage. Ilya Kovalchuk’s shot was saved but Dadonov was unmolested in the slot to fire home at the second attempt. And once again it was the trigger for a double salvo as Tsvetkov tumbled to the ice seconds later allowing Thoresen a free shot for his second of the game.

Viktor Tikhonov got his first post-season point to make it 6-1 late on, capitalizing on a hospital pass from Mat Robinson that left Andrei Mironov in all sorts of trouble in front of goal. That was the end of the scoring as SKA took total command of the series. 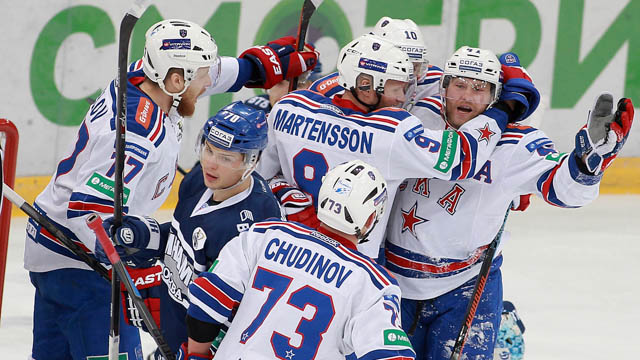