For the second game in a row Ak Bars shut out Avangard to move ahead in this series as injuries begin to bite into Raimo Summanen’s line-up.

Shorn of the talents of Vladimir Sobotka and Denis Parshin the home team was struggling to field more than one line with a potent goal threat and a well-drilled Kazan defense was always going to make it hard to find a breakthrough. By the first intermission in a game where there were few clear-cut chances, Zinetula Bilyaletdinov’s team was confident that it could step up the pace without fear of being caught on a counter-attack.

It still took until almost halfway through the game before Ak Bars got in front, though. Ilya Nikulin, still a reliable goal-scorer from the blue-line, followed up a neat move to score from mid-range. Avangard looked short of ideas, and even if it was able to spend more game time around Anders Nilsson’s net it wasn’t really stretching the Swede. 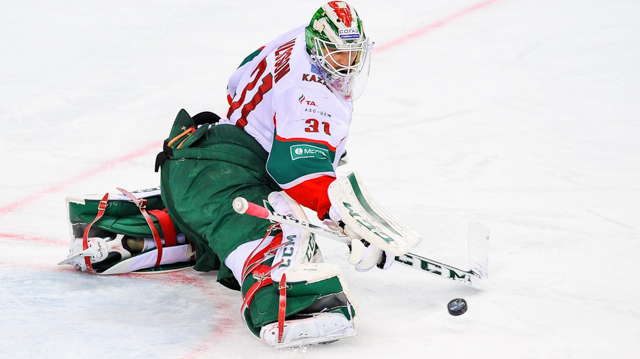 By the middle of the third period the game was up: Justin Azevedo delivered the coup-de-grace after Yakov Rylov’s swift break, firing home a one-timer off Igor Mirnov’s pass. At the other end Nilsson blocked 25 shots for his shut-out and Avangard fell behind in the series. The main consolation comes from a sense of déjà vu – the Omsk team found itself in similar circumstances against Barys but still managed to come through in seven games.