Army Men lead from the back. Western semi-finals, Day 3

A snorter of a wrist shot from Anton Burdasov and an empty netter from Ilya Kovalchuk gave SKA victory in the latest battle of these Western Conference rivals. But much of the credit for the visitor’s precious 2-1 lead in the series belongs to SKA’s often-underrated defense, which rode some early Blue-and-White pressure only to gain in composure as the evening went on. By the end, with clock ticking and the pressure increasing on the host, errors on offense were becoming as frequent as solid play by the blue-liners as Dynamo’s early energy increasingly dissipated in the face of a white-shirted wall in front of the reliable Mikko Koskinen, who made 27 saves.

Dynamo dominated the first period without being able to find the opening goal its enterprise deserved. Indeed, the Blue-and-Whites were so impressive in the early exchanges that not even a five-minute SKA power play could disrupt the flow of the game as the home team produced an exemplary penalty kill. The penalty came midway through the opening stanza when Yury Babenko was called for a high hit on Evgeny Ketov and ejected from the ice, but Dynamo’s high-octane pressing game kept SKA at bay with a mix of relentless forechecking that led to several errors on the blue line. The best chance came to the shorthanded team as Maxim Pestushko found himself one-on-one with Koskinen but as he looked for the gap low stick-side the goalie got enough of a pad down to push the puck to safety. 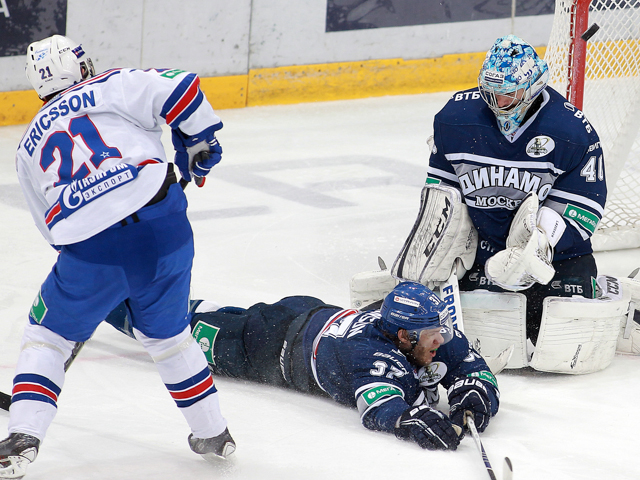 But the home team’s high-energy approach began to slow down in the middle session as SKA started to look much more dangerous. The visitor thought it had the opening goal in the 24th minute when the puck looped up off the boards and dropped dangerously in front of the net. Jimmie Ericsson reacted first and only a wonder save from Alexander Lazushin – so good it needed the video official to confirm it – kept the scores level.

The scoreboard wasn’t blank for much longer, though. Dynamo lost possession in SKA’s zone and a quick pass from Dmitry Kalinin found Anton Burdasov wide-open in the left-hand channel. His powerful shot came early and gave Lazushin no chance as it whistled into the top corner, putting SKA ahead in regulation for the first time in the series. Dynamo then had to kill another penalty, with Maxim Chudinov almost capitalizing on the extra space with a weaving run from end-to-end that ended in Lazushin’s chest. Konstantin Volkov had a couple of chances late on, forcing two glove saves from Koskinen as the second period came to an end. 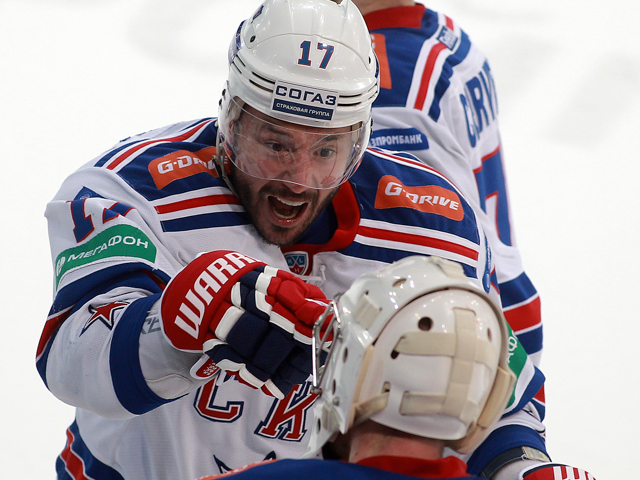 In the third period Dynamo faced a determined SKA defense and found its opportunities limited. As the home time sought to up the tempo and force an equalizer the visitor also found more space on the breakaway, managing to hold the Blue-and-Whites at arm’s length for frustrating periods. And when Lazushin was called to the bench in the last two minutes the inevitable happened: possession turned over on the blue line and Ilya Kovalchuk advanced to fire home the second.

Dynamo continued to gamble on a 6v5, but only troubled the officials when Nikolai Zherdev was sin-binned after his frustrations got the better of him and he took out his anger on Anton Belov. The SKA man could let the scoreboard deliver his retaliation for him.