Sibir took a 2-0 lead in its series against Metallurg thanks to a 3-2 victory in front of another jubilant packed house in Novosibirsk.

This was another hard-fought encounter with both teams creating plenty of dangerous opportunities around each other’s nets, and it was perhaps surprising that there was only one goal in the first period. It went to the host: Viktor Bobrov perfectly placed to convert Ivan Vershchagin’s pass midway through the opening session.

That lead lasted until midway through the second period when Jan Kovar finally found a way past Alexander Salak. Magnitka’s caused was helped by a soft penalty given away by Stepan Sannikov, and the relief was palpable after yesterday’s shut-out. But the joy was short-lived as Sannikov soon redeemed his earlier error. He battled his way out of the corner, evading the attentions of Rinat Ibragimov and Vladislav Kamenev before rushing the net and forcing the puck inside Vasily Koshechkin’s near post. 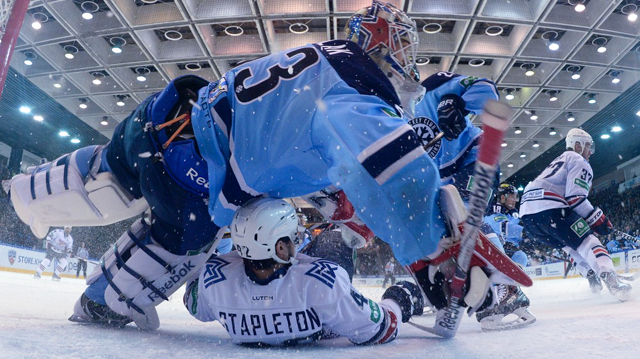 A 55th-minute power play goal made it 3-1 to Sibir thanks to a neatly-worked piece of play. Dmitry Kugryshev’s pass found Patrick Hersley overlapping to shoot past a hopelessly out-of-position Koshechkin. Magnitka hit back with a Danis Zaripov goal barely three minutes from the end, but the defending champion was unable to complete the fightback in the remaining time and now faces a real battle to keep hold of its crown when the action switches to the Urals on Monday.