Ak Bars and Avangard, those two old foes, served up a thrilling opener to their series. It took an overtime strike from Sergei Shirokov to snap a 3-3 tie and give Avangard the early initiative in what promises to be a classic series.

Shirokov struck deep into the second period of overtime, just after Ak Bars had killed a penalty. He got in the right place to fire home the loose puck after Erik Gustafsson’s shot bobbled around in front of the net.

The game should have been a celebration of home coach Zinetula Bilyaletdinov’s 60th birthday, but it quickly became clear that Avangard was not willing to play the perfect guest. On the contrary, the Omsk team came within 61 seconds of snaffling the birthday cake for itself before Alexander Svitov got his second of the night to take us into overtime.

Svitov also started the scoring, albeit in somewhat freakish fashion. Konstantin Barulin, Avangard’s goalie, ambled off his crease to escort the puck behind his net only for Svitov to recover it from the boards and fire it hopefully towards the slot. Barulin’s luck was out; the disc bounced off his skate and into the net to give Ak Bars a 10th minute lead. 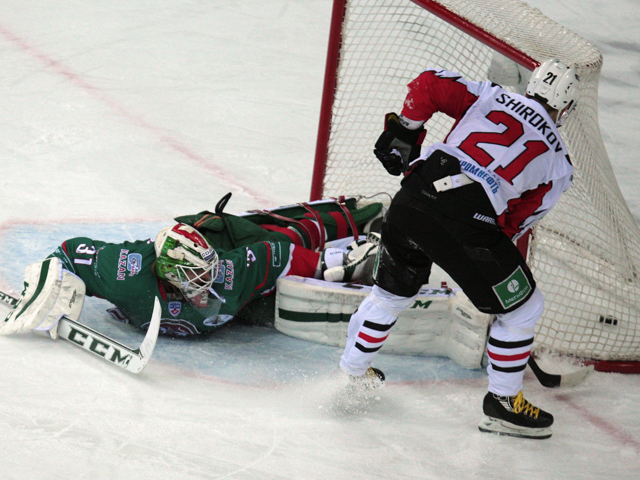 Sergei Shirokov tied it up just before the hooter, converting a penalty shot after being fouled by Stepan Zakharchuk and Alexander Perezhogin put Avangard up in the second before Sheldon Brookbank’s rising wrist shot deceived Barulin to level the scores and chase the goalie to the bench.

The third period was tense and remained scoreless until the final moments. Kirill Semyonov thought he’d won it for Avangard with just under three minutes left. He took Roman Berdnikov’s pass off the boards and got a shot off past Yakov Rylov and inside Anders Nilsson’s post.

But Svitov’s second goal tied the scores in dramatic fashion – and was far more satisfying than his opener. Neat work from Oscar Moller on the boards was followed by a pass to Igor Mirnov at the near post; he moved the puck on to Svitov at the far post and the forward squeezed the puck inside the angle to save his team … at least temporarily.