Dynamo Moscow tied its series with SKA at 1-1 before the teams head to the Russian capital for the next instalment on Sunday.

The Blue-and-Whites quickly showed that they weren’t about to retreat after Thursday’s overtime loss, but it took an error from last night’s hero Artemy Panarin to set the visitor on its way. Panarin, scorer of the game-winner 24 hours earlier, offered a misplaced pass straight to Vladimir Bryukvin and the youngster cashed in to score the opening goal.

SKA missed a great chance to tie it up a couple of minutes later when Evgeny Ketov failed with a penalty shot but midway through the second session Panarin redeemed his earlier blunder with a superb assist on Vadim Shipachyov’s equalizer. Under pressure out on the boards the forward whipped an instinctive pass to the back post and his team made applied the finish from close range.

However the home side has never led in regulation time in this series and it was Dynamo that went in front once again deep in the second. A SKA attack broke down and Maxim Karpov spearheaded the breakaway, surging into the host’s zone and shooting early to beat Mikko Koskinen on the stick side as Alexander Yudin failed to close down the chance.

Not surprisingly SKA tried to take the third period by the throat in an effort to level the scores once again, but despite having more of the puck and more shots on Alexander Lazushin’s net the scoring all came at the other end. Kaspars Daugavins converted a power play in the 48th minute to make it 3-1 then, as desperation began to creep in, Alexei Tsvetkov wrapped up the win with an empty-netter in the 58th. 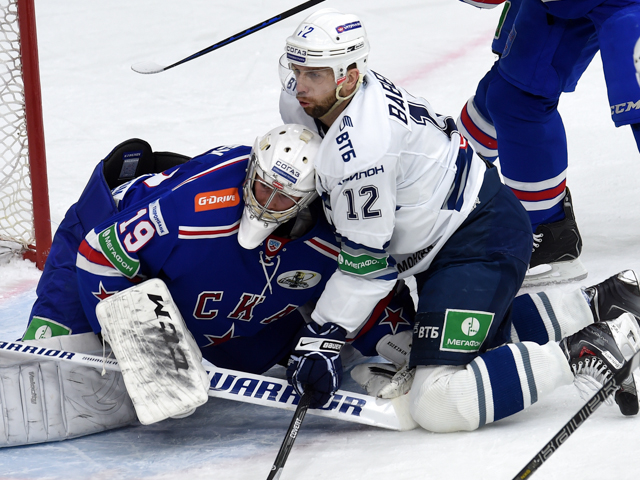