After a late, late show to win Game 1 of this series, CSKA found Game 2 far more comfortable. A trio of unanswered goals in the second period proved to be decisive as the Army Men march on Helsinki with a 2-0 advantage in the series. The 4-0 verdict is the first time these teams have been separated by more than a single goal in the their meetings this season.

Igor Grigorenko, Jokerit’s tormentor in chief on Thursday, opened the scoring in the 27th minute with another goal created by Alexander Radulov. Battling his way out of the corner, Radulov fired a backhand pass across the face of the net and Grigorenko got in front of Petr Koukal to shoot the puck past Henrik Karlsson. Ninety seconds later Simon Hjalmarsson put Jan Mursak’s pass in off the bar and the game was already well in the home team’s control.

If Jokerit felt it was hard done by after the first game – and especially after the crucial late penalty on Ossi Vaatenan was overturned by the league’s disciplinary committee – it could have few complaints about the outcome here. Mursak added a third, surprising Karlsson with a wrist shot from deep in the right-hand circle and putting the puck over the goalie’s shoulder off a Nikita Zaitsev pass just before the second intermission.

That more or less closed the door on Jokerit’s hopes of a revival and a second Grigorenko goal late on, robbing Oskari Korpikari on the blue line and forcing the puck home in a melee, completed a comfortable CSKA win. Roman Lyubimov thought he’d added a fifth in the last minute, but the video official ruled that he kicked the puck into the net. 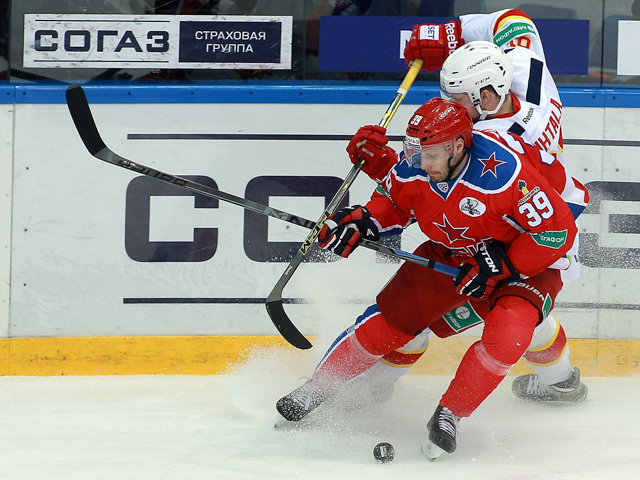