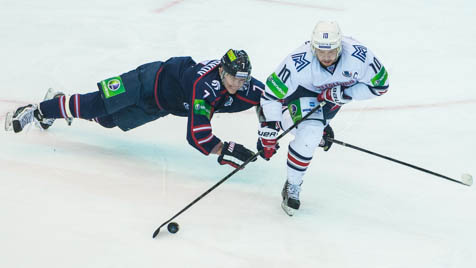 Anticipation is bubbling over in Novosibirsk – when tickets for the opening games of the series went on sale they were sold out in just 18 minutes. So there’s likely to be a fevered atmosphere when Sibir takes on Magnitka in a repeat of last season’s Conference semi-final.

That sequence was a sweep for Metallurg, in imperious form on its way to lifting the Gagarin Cup, but head coach Mike Keenan and his assistant Mike Pelino are adamant that last year’s games have no bearing on the upcoming series. “Will Sibir be more determined because of what happened last year? Will we be overconfident? No, to both questions,” the coaching duo agreed. “They are a well coached team that had a very successful season and they played very well to get by a tough Traktor team. We feel good about ourselves as well … and we do have the winning experience of last year to draw on but when the puck drops on Friday night, everything is from that moment on and whatever happened in the past is irrelevant.”

As usual, Metallurg captain Sergei Mozyakin is the danger man – he’s scored five already in the play-offs – but Keenan and Pelino are at pains to highlight that this year’s roster is about more than one prolific line. “We have more depth,” they added. “We have nine defensemen and 15 forwards that can all play. Our young players have developed nicely, we added a couple of key veterans in Rafael Batyrshin and Max Yakutsenya and we believe we have the best goalie in the league in Vas Koshechkin.”

At Sibir, too, the focus is not on last year’s series. Head coach Andrei Skabelka hasn’t gone to the extremes of SKA’s Jukka Jalonen in 2013 and banned any reference to the previous encounters, but he remains more eager to worry about the current Magnitka roster. “Last year’s experience cannot be ignored but it’s more important to look at the here and now,” he told Championat.com. “Mike Keenan’s team is largely the way it was a year ago and there are no fundamental differences. It’s a balanced team with some real leaders on the [Jan] Kovar line and three other strong lines.”

Perhaps the main thing to take from last year is the psychological demands of play-off hockey. After beating Ak Bars to claim its first ever KHL play-off series win, Sibir was perhaps guilty of complacency going into the next stage. One year after, nobody believes that the team has delivered its tasks for the season, according to Skabelka. But Dmitry Kugryshev, Sibir’s top scorer in the regular season, is also at pains to point out that the 0-4 loss a year ago was not evidence that the team was out of its depth. “The result speaks for itself and we can’t pretend to be satisfied with that,” he said. “But don’t forget that we were never outplayed by Magnitogorsk, we were competitive in every game. Now we’re ready to produce some better hockey this time.” 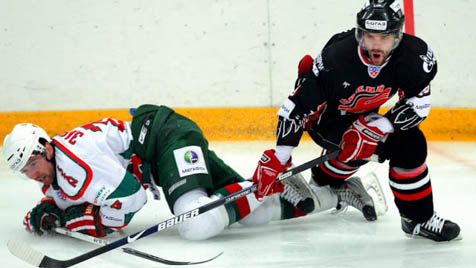 These two old rivals have a long history … but both sets of fans feel they’ve also endured a long wait for glory. Ak Bars won the first two Gagarin Cups under Zinetula Bilyaletdinov, but hasn’t been back to the grand final since beating MVD in 2010. Avangard blew a 3-1 series lead against Dynamo Moscow in 2012 and is still waiting to claim the KHL’s top prize for the first time.

For Ak Bars forward Alexander Burmistrov, memories of his local team taking on its rival from Omsk go back to his adolescence. “I’m Kazan born and bred and of course I remember seeing all those big games with Avangard,” he told the club’s website. “I remember how we were all celebrating when [Ilya] Nikulin scored 15 seconds before the final hooter [to clinch the Russian Superleague title in 2006]. For me, playing Avangard is a real derby, a real rivalry.”

Sergei Kostitsyn moved from Omsk to Kazan in the summer and is relishing the upcoming series. But he insists there is no revenge mission. “Of course I’m looking forward to playing against Avangard,” he told Sportbox.ru. “It’s going to be a fun series. I know people will ask if I want to prove a point to my former club, but it’s not like that. They wanted to trade me, fair enough. I’m not trying to settle any scores. It doesn’t matter that this is my old team, I just want to win games of hockey.”

Avangard had the toughest journey to this stage – its series against Barys was the only one to go to seven games in the opening round. Worse still, a serious injuryto captain Sergei Kalinin added to the pressure on Raimo Summanen’s roster as a draining battle took its toll. But determination to win through for their skipper saw a 3-1 win in the decisive game and set up the clash with Ak Bars.

Chad Kolarik, the star of that victory, is looking to draw strength from adversity. “It’s good that we finally got over the line,” he told the club’s website. “You have to remember these are two pretty even teams and we had lots of guys with injuries but we still managed to battle through it. Hopefully that experience will help us in the next round.” Kolarik also paid tribute to his line-mates Alexander Popov and Alexander Perezhogin. “It’s hard not to score when you play with those two,” he added. “My first goal today, I think even my mom would have scored it!”

That’s not the end of Avangard’s goal threat: Vladimir Sobotka, Sergei Shirokov and Denis Parshin have also impressed this season … and it’s Parshin who could be singled out for attention in Kazan. “He’s a good technical striker,” said Ak Bars defenseman Vladimir Denisov, a former team-mate of Parshin’s at Torpedo. “You can’t afford to give him any space. We need to take him out of the game to make sure he can’t show off his skills.”

Both series start on Friday, March 13, with Games 1 and 2 in Kazan and Novosibirsk. The action moves to Omsk and Magnitogorsk on March 16 and 17. If needed there will be further games on March 19, 21 and 23.
#East
Share
Прямая ссылка на материал