CSKA snatched a dramatic victory in the final minutes of its series-opener against Jokerit, dishing out maximum punishment to Ossi Vaananen with two goals as he sat out a major penalty for a check to the head.

Vaananen’s indiscretion earned him a 5+20 as Jokerit was trying to run down the clock on a 2-1 lead – and CSKA took full advantage.

Within 10 seconds the scores were level through Igor Grigorenko. Alexander Radulov took a pass from Nikita Zaitsev, fired in a shot and Grigorenko was on the spot to convert the rebound.

Then the same trio combined again in the last minute on Grigorenko’s second of the night, shattering Jokerit’s hopes and gaining a vital advantage at the start of the series. This time it was Zaitsev’s shot and Radulov who pushed the rebound out wide where Grigorenko scored from an acute angle.

The early stages offered little hint of the drama that was to come. After a goalless opening session Jokerit took the lead on its first power play early in the second. Niklas Hagman claimed the goal, putting away the rebound from a Ryan Gunderson shot that Kevin Lalande saw late through a screen of players. 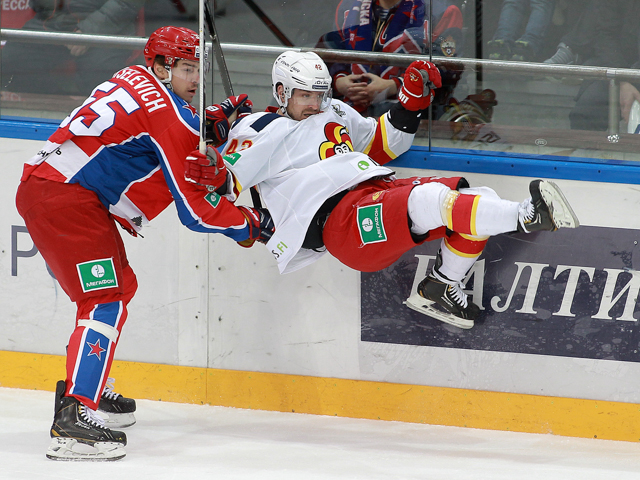 Much of the pre-game talk had been about Steve Moses and the American added to his impressive scoring record to make it 2-0. His fifth goal of the play-offs came on the power play early in the third with a precise wrist shot to the top corner after some neat interplay worked an opening for him in the circle. With the Finns defending calmly it was difficult to see a way back for the home team.

But CSKA has its own talisman in the form of Radulov and he pulled one back to ensure a tense finale. Admittedly it wasn’t a goal that will be prominent in his career highlight reel: Zaitsev’s shot thundered into a crowded slot, Grigorenko played the puck across the face of goal and Radulov, facing away from the net, saw the disc bounce off his skate and past Henrik Karlsson. It was the first of three huge blows delivered by that trio as the Army Men turned defeat into triumph.