SKA claimed an overtime victory over Dynamo, twice recovering from a goal down before winning the game on an Artemy Panarin goal 49 seconds into the extras.

It was a goal worthy of winning any game: after Roman Cervenka twice tested Alexander Lazushin, Panarin collected the puck out on the boards and embarked on a solo rush to the net before firing past the goalie and igniting an explosion of joy and relief among the bulk of the 12,000 crowd.

That relief was intensified by the knowledge that for long period of the game it had looked like Dynamo was writing the first chapter of another volume in the library of SKA’s play-off disappointments, twice taking the lead and doing a good job of quieting the home team’s dangerous offense.

It took a little while for the action to hot up in Petersburg, but once Mat Robinson put Dynamo up the blue-touch paper was duly lit. Robinson’s goal was a classic Blue-and-White counterpunch: Maxim Pestushko led a quick raid into enemy territory and slid the puck across for the defenseman to follow-up with a goal-bound one-timer. 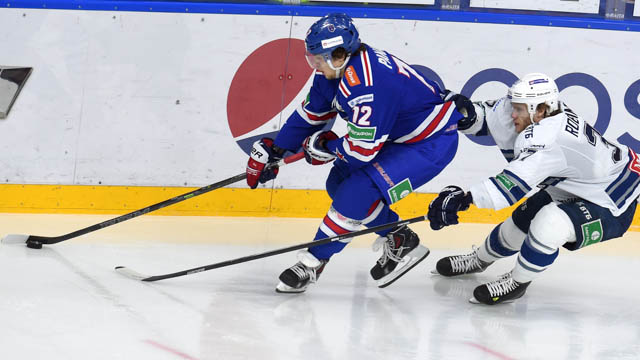 SKA levelled in the 23rd minute thanks to a powerful Evgeny Ketov wrist shot from the face-off spot that beat Lazushin on its way to the top shelf but Dynamo responded quickly with Pestushko involved again, finding Alexei Tsvetkov in the slot as Mikko Koskinen got pulled out of position.

Patrick Thoresen found a second equalizer for the home team before the intermission, converting a power play as he forced home the rebound from Ilya Kovalchuk’s shot from the blue line. Dynamo’s players had spoken before the start of the series about the importance of denying SKA the chance to play with an extra man, and the importance of special teams to the host was amply demonstrated here.

The third period saw fewer big chances. Maxim Karpov’s rather unnecessary tripping infringement gave SKA a big opportunity midway through the session but the Blue-and-White defense did a solid job on the PK. Late on Ilya Kablukov skated through one-on-one with Lazushin but couldn’t beat the goalie and passing up the last clear opportunity to settle matters in regulation.