Eight games on tap with Jokerit looking for its 9th win in a row! 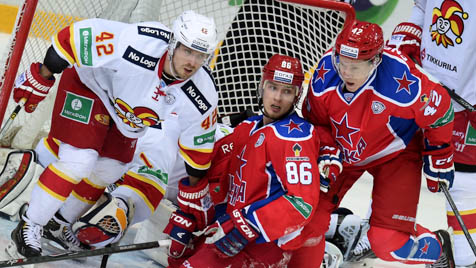 After sweeping KHL newcomer HC Sochi, regular season champ CSKA turns its attentions to another play-off debutant, Jokerit. But the Finns, who overcame an initial hiccup to breeze past Dinamo Minsk, pose a sterner challenge than Sochi’s hard-working but limited line-up.

There’s no shortage of confidence in the squad from Helsinki – witness Linus Omark’s audacious attempt from behind the net, lobbing the puck over the goal and looking for a deflection of the netminder’s back in the final game of that series. The team has demonstrable firepower, with the regular season’s leading scorer Steve Moses spearheading a dangerous offense, and like any Finnish roster it can be relied upon to battle hard and do everything that is asked of it to get a result.

Small wonder, then, that CSKA’s GM Sergei Fedorov rated Jokerit as one of his club’s most awkward opponents this season. “We played them twice and they were both among our most difficult games,” he told Championat.com. “After that our players know very well that there will be no easy path through the play-offs. Jokerit isn’t like other teams in the KHL, they have a lot of experienced pros who know how to keep the game plan going for the whole 60 minutes.”

The impressive performances against Sochi in round one undermined claims that CSKA might be off the pace in the play-offs after being hailed as Russia’s champion when it topped the regular season table. Instead Alexander Radulov insists that the Gagarin Cup is the only prize that matters to him and his team mates. “What have we won so far? Maybe other people think we’ve won something, but they just keep moving the goalposts,” he said. “For me personally these play-offs are just the start. We always used to get the medals after the play-offs, then suddenly this season people talk about the regular season. It won’t be long before it all changes again.”

In Helsinki, Jokerit’s experienced head coach Erkka Westerlund is playing it cagey. ‘We’ve got a good plan,” he told Helsingins Sanomat. “You’ll see how it works out later.” Westerlund has experience of winning big games in Russia – he was in charge when Finland shattered Russia’s Olympic dream at the quarter-final stage in Sochi last year, and also stood behind the bench in Moscow in 2007 as the Finns beat the Red Machine 2-1 in the World Championship semi-final. He’s already seen how to neutralize the individual talent of some of Russia’s top stars, and believes his team can frustrate Radulov with disciplined defense and knock him off his game.

And while many in Russia have been hailing CSKA’s scintillating hockey, Westerlund remains politely unintimidated, having matched the Army Men in regular season. He stresses a belief that his team is more versatile than its opponent and can bring different approaches to the game as required … and he hopes that will tip the balance in his favor when the action starts in Moscow on Thursday. 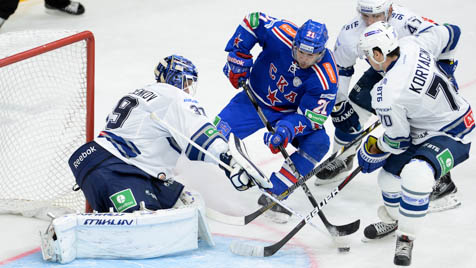 A play-off doesn’t feel like a play-off these days without a renewed clash between SKA and Dynamo Moscow. Two seasons running these two went head-to-head in classic confrontations between big-spending, star-studded SKA and the cannily-managed, ultra-disciplined Dynamo. Both series went to the Muscovites, and both were followed by Gagarin Cup glory.

The sequence was halted last year by Lokomotiv, which did for both of these clubs, but normal service has been resumed even if the cast is a bit different in 2015. Behind the benches Dynamo cedes the ‘wily old campaigner’ tag; Harijs Vitolins is no rookie at this game after years alongside Oleg Znarok, but at the same time he’s not got his former colleague’s deep experience of leading a team through the business end of a major competition. Opposite him, however, Vyacheslav Bykov has all the experience required: two World Championship wins and a Gagarin Cup triumph at Salavat Yulaev confirm that, whether it’s club or country, he knows how to win the big ones.

The SKA head coach is busy insisting to everyone that Dynamo is the favorite in this series, despite the fact that his team finished ahead of the Blue-and-Whites in the regular season table. “Does Dynamo have a weak side? No, it’s a strong team in every area,” Bykov said. “I’d make Dynamo the favorite for the series against SKA and for the whole Gagarin Cup.”

However Dynamo has injury worries going into the opening game in Petersburg on Thursday. Konstantin Gorovikov and Denis Mosalyov miss out, although Nikolai Zherdev is back in full training. That didn’t hinder the team too much against Lokomotiv in the end, with goalie Alexander Lazushin and rookie forward Vladimir Bryukvin recognized by the KHL for their impressive performances, but defenseman Dmitry Vishnevsky is cautious about the upcoming clash with SKA. “It won’t be easy for anyone and I think we’ll see some great hockey,” he told Championat.com. “We watched SKA’s games in the first round of the play-off and it’s obvious that they have a very good power play. We can’t afford to pick up silly penalties. They’re a fast team with a strong offense.”