The whistle that went around the world – KHL Referee on NHL duty! 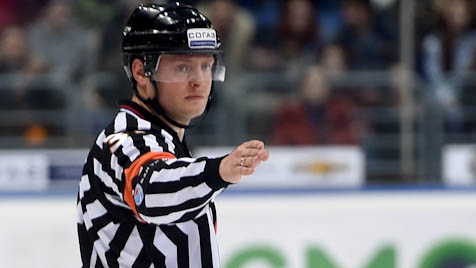 A little bit of history was made in National Hockey League on Monday, the 9th of March. When Evgeny Romasko teamed up with Paul Devorski to take charge of the Detroit Red Wings’ regular season clash against the Edmonton Oilers, he became the first ever Russian to be on refereeing duty at an NHL game.

From October 2014 to February of this year, the 33-year-old from Tver was keeping order in the AHL, where in almost forty appearances he steadily built a reputation for a keen eye and a cool head, and this did not go unnoticed by the professional assessors of the NHL. The offer of a contract to work in both leagues soon followed, and Romasko readily accepted the challenge. To put his achievement into perspective, it is worth noting that the NHL did not get its first European referee, Sweden’s Marcus Vinnerborg, until 2010.

For those referees raised in the Russian and Soviet tradition, Romasko’s pioneering work is welcome confirmation that officials, as well as superstar players, can have their hard work and professionalism appreciated on both sides of the Atlantic. The NHL’s recognition of Romasko’s talent is just the latest episode in a story of increasing Russian presence in the highest echelons of international hockey refereeing. Vyacheslav Bulanov was honored with the role of chief referee at the 2010 Olympic Games in Vancouver – a duty undertaken four years later in Sochi by Konstantin Olenin, who also worked alongside Bulanov and Roman Gofman at the most recent World Championships in Minsk. More recently, Olenin and Gofman were in charge of several games in the 2015 World Junior Championships, while no fewer than six of the KHL’s referees - Alexei Anisimov, Vyacheslav Bulanov, Roman Gofman, Konstantin Olenin, Eduard Metalnikov and Stanislav Raming - have made it onto the shortlist for the 2015 World Cup.