Chad Kolarik fired Avangard into a Conference semi-final showdown with Ak Bars, scoring 2+1 in his team’s 3-1 win over Barys in the decisive seventh game of this series. The Canadian made the difference between the two teams and confirmed that, just as in the West, the top four teams from the regular season would progress to the last four in the Conference.

Barys was first to show. After forcing a couple of smart saves out of Konstantin Barulin on an early power play the visitor took the lead thanks to Nigel Dawes’ one-timer off a Dustin Boyd pass in the fifth minute. But there was controversy over Avangard’s equalizer, with Chad Kolarik smashing Barys defenseman Alexei Litvinenko to the ice moments before he scored off an Alexander Popov pass. Several of the Barys players were clearly unhappy that play continued for some time with their man lying prone behind the net, but the goal stood and the scores were level.

Avangard took the lead with more Barys players on the floor but this time the sight of two defensemen leaping down to block an anticipated shot proved to be a self-inflicted wound. Kolarik opted against going for goal and slipped a pass for Alexander Perezhogin to score from an acute angle as space opened up around the net.

That proved to be the game-winner: the third period continued without a goal until the 58th minute. Barys, knowing it had to force the issue, withdrew its goalie but lost possession and within 22 seconds Kolarik found the empty net to settle the matter. 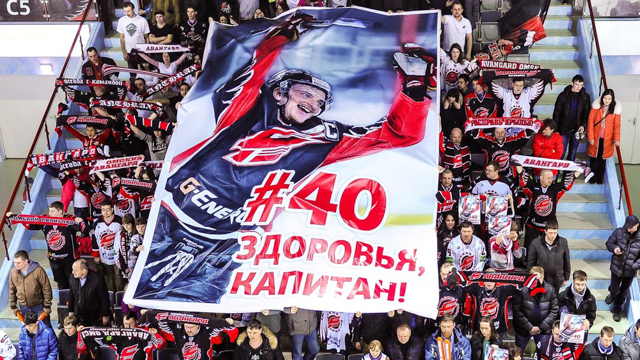 Prior to the game there was good news from Astana, where Avangard captain Sergei Kalinin remains in hospital after his injury in the previous game. The forward released a selfie of himself from his bed half an hour before the face-off with a message thanking fans for their support and reassuring them that he was recovering well.