Jarno Koskiranta’s fifth goal of the play-offs was enough to earn Sibir a slender victory over Traktor and secure its place in the Eastern Conference semi-finals for the second year running. The Finn got the game-winner midway through the third period to give the Siberians a 4-2 series success.

Koskiranta, who now joins Sergei Mozyakin at the top of the post-season goal-scoring chart, stormed into Traktor’s zone with eight minutes to play and surprised Michael Garnett with an early wrist shot as the defense failed to close down the danger quickly enough.

That proved sufficient to resolve a game in which Traktor had its chances but perhaps failed to really test the visitor as much as necessary. While the Chelyabinsk team spent much of the game on the front foot, it managed surprisingly few shots on Mikko Koskinen’s net.

It was Sibir that struck first, taking advantage of its first power play to open the scoring through David Ullstrom. That goal, the Swede’s third in the series, pushed Traktor to the brink of elimination and prompted a strong response from the home team. Roared on by its fans, Traktor stepped up its efforts on offense in search of a way to recover both the game and the season.

It took time to pay off – Anton Glinkin’s equalizer came deep into the second period – but the path to goal had been well-scouted by the time he struck. In the moments before the goal Traktor saw two dangerous breakaways thwarted by Koskinen before Dmitry Pestunov slalomed his way through the defense to sow confusion around the Finn’s net. As the puck dropped loose, Glinkin was on hand to snaffle the rebound and tie the scores.

Sibir reaches the second round of the play-off for only the second time in its history. Once again it will face Metallurg Magnitogorsk, looking for an improvement on last year’s 0-4 sweep at the same stage. 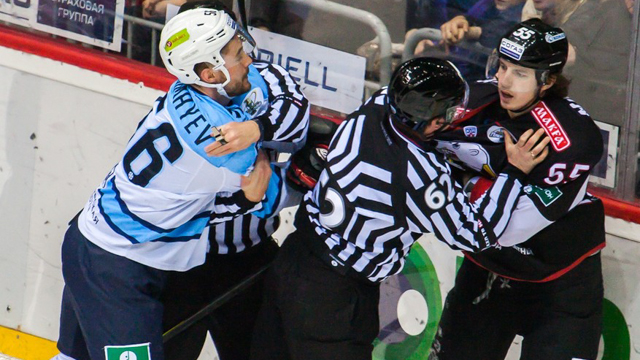 Barys saved itself from a first-round play-off exit with a home win over Avangard in game six, taking the series to a decider in Omsk on Tuesday.

The outcome hung on two quick goals early in the second period, breaking the deadlock decisively after an opening session of few opportunities.

Roman Savchenko got the first, firing home a one-timer off a Konstantin Rudenko pass in the 25th minute. Two minutes later it was 2-0 after Nik Antropov capitalized on an Avangard error to launch a breakaway that ended with Roman Starchenko finding Denis Kostin’s net.

Avangard reduced the deficit early in the third period with a well-taken goal from Kirill Semyonov, but then ran into penalty trouble at just the moment when it needed to take the game to the host. Nikolai Glukhov and Vadim Khomitsky picked up 2+10 sanctions in separate incidents a few moments apart, and while the Siberians killed that penalty Barys extended its lead once the teams were back to full strength. Nigel Dawes made it 3-1 and then claimed an assist on Konstantin Pushkaryov’s empty-netter as Barys took this series all the way to game seven.