All clear in the West – Dynamo completes semi-final line-up

Dynamo Moscow wrapped up its series against Lokomotiv with a 4-0 victory, taking a 4-2 win in the Conference quarter-final and setting up a renewal of play-off hostilities with SKA.

After a big win in Moscow last time out, Dynamo began the game with a clear determination not to suffer a repeat of last year’s series when it arrived in Yaroslavl with a 3-2 lead only to suffer back-to-back hammerings and crash out of the competition. The Blue-and-Whites put Loko under pressure from the start, and opened the scoring after five minutes when Martins Karsums scored his team’s first power play goal of the post season.

That lead was doubled before 10 minutes were up: amid chaos in Loko’s defense Alexander Osipov stayed calm and picked his spot to hit the net through a crowd of spread-eagled D-men. Already it seemed that the home team was going to struggle to prolong the series.

Dynamo extended its lead in the third with another power play goal, this time a one-timer from Maxim Pestushko. The forward, now back from injury, unleashed a sizzling shot from a Karsums pass to claim his first marker of the play-offs midway through the second stanza. 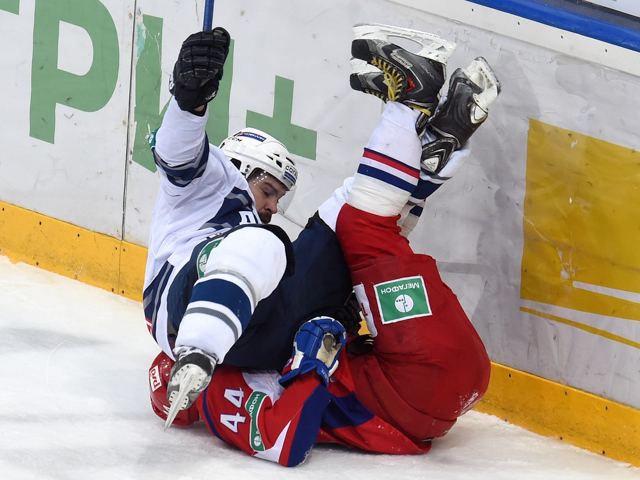 From that point on the visitor concentrated on seeing out the third period without undue alarm, allowing few shooting chances as Alexander Lazushin took his second shut-out of the series. And, as frustration got to the host, another power play saw Mikhail Pashnin expelled for a check to head and Kaspars Daugavins score a fourth for Dynamo.

Dynamo’s win completes the line-up for the Conference semi-finals with the top four seeds all making it unscathed through the first round. The action starts again on Thursday with CSKA hosting Jokerit and SKA entertaining Dynamo Moscow.