Metallurg Magnitogorsk and Ak Bars, arguably the East’s best contenders for this season’s Gagarin Cup, booked their places in the Conference semi-final. Both teams wrapped up 4-1 series wins with home victories over Salavat Yulaev and Avtomobilist respectively. The other two series continue on Sunday, with Traktor and Barys needing home wins over Sibir and Avangard to maintain their interest in the competition.

Metallurg Magnitogorsk booked its place in the Conference semi-final with a 3-1 win at home to Salavat Yulaev, securing a 4-1 series success.

The outcome echoes Magnitka’s 4-1 win in the Conference final series last year, the penultimate step on the Steelmen’s journey to Gagarin Cup glory.

After a 10-goal spectacular in the previous meeting in Ufa on Wednesday, both teams reverted to their accustomed defensive game despite an opening flurry that saw them trade markers in the first few minutes. Ivan Vishnevsky, who scored twice in that 4-6 reverse two days earlier, opened the scoring for Salavat on the power play, finding the net with a powerful shot from the blue line. But Magnitka hit back within a minute, with Viktor Antipin putting away the rebound from a Danis Zaripov shot.

The decisive goal came late in the first period, and once again it was a masterpiece from Sergei Mozyakin. He followed up his hat-trick heroics in Ufa with a beautifully taken goal. Taking Jan Kovar’s pass in front of the net he had to bide his time as three opponents sought to shut down the space for a shoot. Once they were committed, Mozyakin spotted the tiniest of gaps and clinically fired the puck into it; a fine goal and a fitting resolution to the game and the series.

From that point on defenses were on top, with Magnitka happy to keep chances at a premium. Only when Salavat went for broke did we see another goal; unfortunately for the visitor it went into its own empty net from Tim Stapleton, putting the issue beyond doubt. 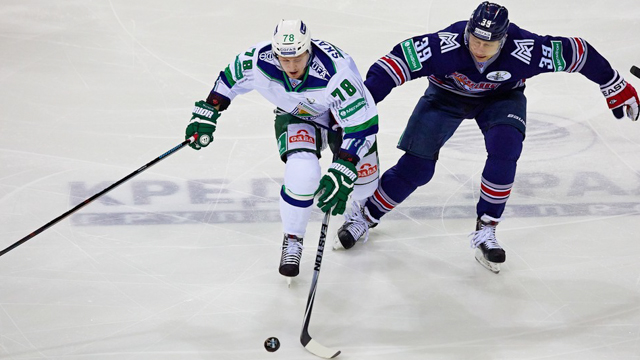 Oscar Moller has enjoyed his play-off games in Kazan so far, adding two goals here to his back-to-back overtime winners at the start of the series.

He scored twice in the first period, in the first and last minutes, sandwiching Vitaly Popov’s equalizer. Ak Bars made it 3-1 midway through the second; Alexander Burmistrov was given far too much freedom to roam through the Avto zone and his shot popped up a rebound that Kirill Petrov put away.

Avtomobilist sprang a surprise at the start of the third period, withdrawing goalie Jakub Kovar for a sixth skater in a bid to convert a 5v3 power play. That gamble paid off when Tobias Viklund fired home Alexei Simakov’s pass to reduce the deficit with a rare goal in a 6v3 format.

However, that was as close as the visitor got to saving the game and the series; a late power play lasted just 20 seconds before Alexander Rybakov was sent to join Vladimir Denisov on the sidelines. Avto managed to raise one final storm in the last seconds, but Anders Nilsson stood up to a flurry of shots on goal to steer Ak Bars into the next round. 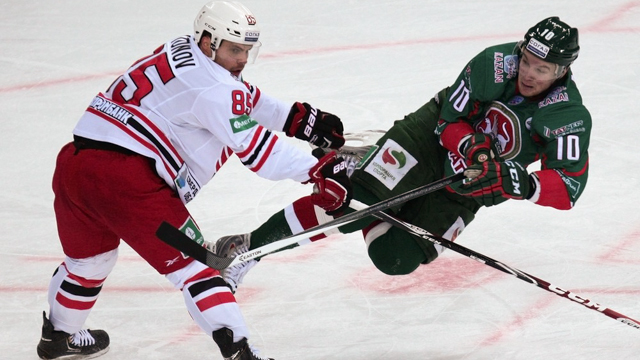 Avangard edged in front in its series with Barys, winning 2-0 on the night to take a 3-2 lead into Sunday’s trip to Astana.

The home team made the perfect start here, catching Mike Lundin out of position from the off and grabbing the lead as Chad Kolarik scored off an Alexander Popov pass. With a lead to defend, Avangard opted to play cautiously and rely on shots from mid range rather than committing players to the net and risking a quick turnover and counter from Barys.

The Kolarik line got Avangard’s second, on the power play in the middle session, with Alexander Perezhogin squeezing the puck home from close range after Popov’s shot was saved.

For Barys, though, defeat – and especially the failure to score – left the team lamenting the loss of Brandon Bochenski, one of the most consistent goalscorers in the KHL in recent seasons and part of the most prolific trio of the regular season. That was most apparent late on when Maxim Goncharov was handed a five-minute penalty for boarding on Talgat Zhalauov. Despite the long numerical advantage, Barys struggled to test young goalie Denis Kostin, who went on to complete his first ever play-off shut-out with 32 saves. 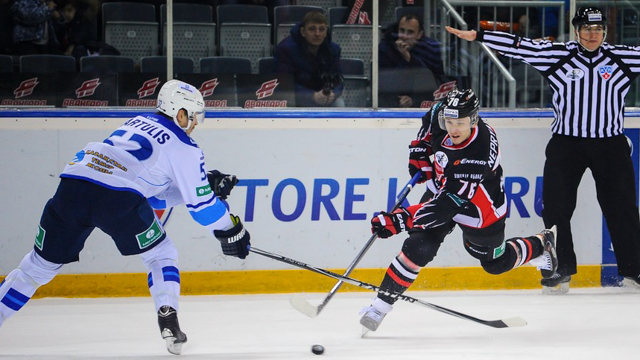 Sibir followed up an overtime win in Chelyabinsk with a disciplined display on home ice to move ahead in the series.

David Ullstrom, the game-winner in the previous encounter, got things rolling midway through the first period, deflecting a Jonas Enlund shot past Vasily Demchenko in a close copy of Wednesday’s decisive strike. That didn’t distract Traktor from its lively start, and with better finishing the visitor could have gone in to the first intermission with the scores tied at worst.

Instead, though, it was Sibir who scored again. Stepan Sannikov made it 2-0 early in the second after a quick breakaway. With Traktor in trouble it took a Semyon Kokuyov goal to reduce the deficit, but hopes of sustaining that momentum were quickly dashed by a penalty for Jan Bulis that allowed Sibir to regroup.

Once the teams were back to equal strength it was Jarno Koskiranta who put the result beyond doubt. His touch on Konstantin Alexeyev’s shot had Demchenko sprawling away from the puck and saw Sibir 3-1 up.

The third period produced few chances at either end. Traktor earned its first power play in the 55th minute but was still unable to seriously test Alexander Salak as Sibir skated to an important win. 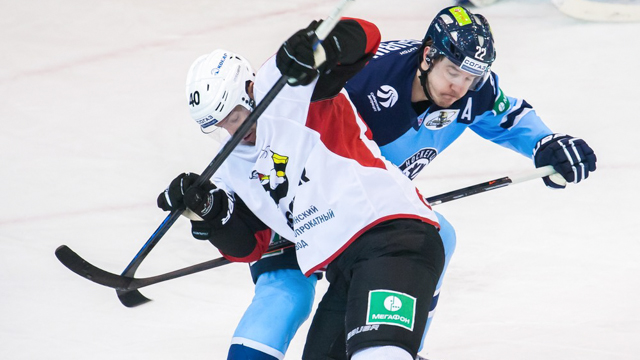