Jokerit and SKA joined CSKA in the Western Conference semi-finals thanks to series-settling wins over Dinamo Minsk and Torpedo respectively. In the remaining unresolved meeting Dynamo Moscow holds a 3-2 lead over Lokomotiv after a crushing win in the capital.

Patrick Thoresen was SKA’s star as it produced a thoroughly professional 2-0 victory to wrap up its Conference quarter-final series in five games.

The Norwegian’s incisive one-time pass handed Tony Martensson a great chance to open the scoring in the 15th minute and a couple of minutes later he scored himself on the power play, getting the key deflection on Maxim Chudinov’s shot.

At the other end Mikko Koskinen made 22 saves for his shut-out, with perhaps the best coming midway through the second period to deny Jarkko Immonen from close range, but the outcome was rarely in doubt.

SKA moves on to the Conference semis once again where it could face its old play-off nemesis Dynamo Moscow or KHL newcomer Jokerit as it bids to reach its first ever Gagarin Cup final. 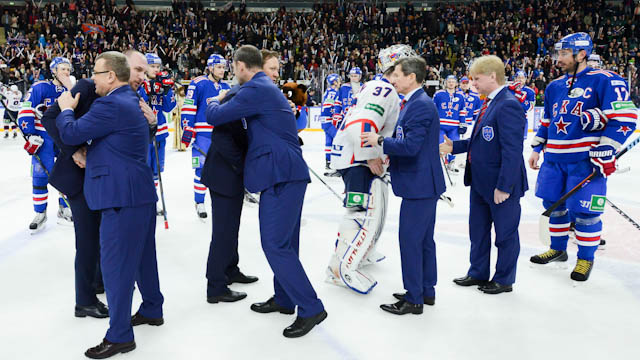 Jokerit powered into the next stage of the play-offs with a convincing 6-0 victory at home to Dinamo Minsk, sealing a 4-1 series win.

It didn’t take long to settle any pre-game nerves as the home team raced into a 2-0 lead in the first six minutes. Steve Moses opened the scoring on 2:15 as the Finns pressed Dinamo’s net from the very start and after two other good chances went begging Tomi Maki made it two on 5:25.

Dinamo tried to get a foothold in the game, but any hopes of finding a way back into contention were ended in the last minute of the first period when Jere Sallinen made it 3-0.

The second period saw Dinamo pitch its big names into the fray for more and more, longer and longer shifts, but to no avail. Jokerit bided its time and as its opponent got tired delivered another three-goal salvo to remove any doubt over the outcome. Moses got his second of the night before Juhamatti Aaltonen and Tommi Huhtala both scored in the 40th minute.

The third period was exhibition stuff with Dinamo aware that it had little hope of recovery and Jokerit happy to conserve its strength ahead of the challenges to come. The teams traded late goals through Petr Koukal and Charles Linglet as Helsinki celebrated another KHL milestone.

A stunning second period performance powered Dynamo to a 7-3 win and sends the Blue-and-Whites to Yaroslavl with a series victory in sight.

In a series that had been nip-and-tuck for more than four games, the Moscow team finally exploded into scoring form to fire four unanswered goals past Lokomotiv and take a 3-2 lead in the best-of-seven contest.

The first period set the scene, with Dynamo leading 2-1 after goals from Sergei Soin and Alexei Tsvetkov sandwiched a marker from Jiri Novotny but it wasn’t until the midway stage of the game that the home side took control. Janne Jalasvaara made it 3-1, scoring from close range after Soin’s shot rattled around the crease with Maxim Karpov and Martins Karsums looking on. Karsums then went one-on-one with Curtis Sanford to make it 4-1 and Alexei Tereshchenko and Mat Robinson stretched the lead to six.

When Vladimir Bryukvin made it 7-1 early in the third – with Kaspars Daugavins picking up his first post-season point on the score – it looked like Loko might be on the way to a huge humiliation. Instead the Yaroslavl team rallied, grabbing consolation goals through Daniil Apalkov and Martin Thornberg.

But the team might take more consolation from history – last season Dynamo led this series 3-2 after five games, only to lose 6-0 and 5-1 in the last two and crash out of the competition. 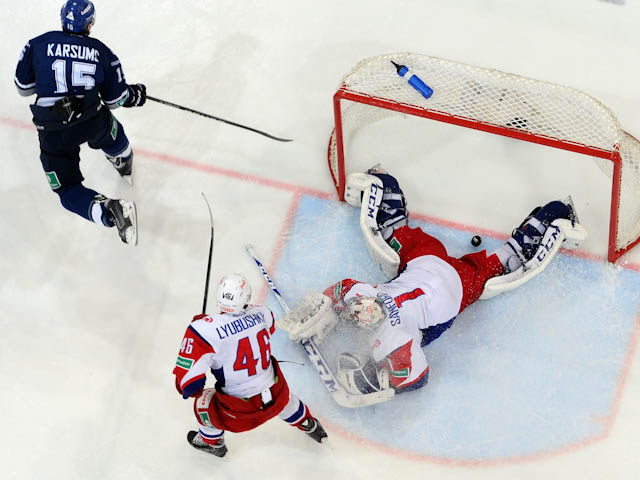