Ak Bars bounced back from Tuesday’s defeat to move 3-1 ahead in its series against Avtomobilist.

The Eastern Conference leader from the regular season produced a solid, sometimes stifling display to squeeze the life out of its opponent, and confirmed its win with two second-period goals.

Dmitry Obukhov opened the scoring in the 23rd minute, capitalizing on a gulf of open space at the far post to tuck away a pass from Alexander Burmistrov. It was 2-0 right on the halfway point as Ilya Nikulin let fly with a trademark slap shot on the power play and Justin Azevedo got the decisive deflection right in front of Jakub Kovar.

Alexei Simakov pulled one back for Avto with five minutes to play, but watchful defense ensured that the final storm fell short of tying the scores.

An overtime winner from Ilya Davydov saw Traktor level its series with Sibir after a hard-fought game in Chelyabinsk.

The outcome was settled in the 65th minute, shortly after Sibir had been reduced to four men following Sergei Shumakov’s high stick. Davydov took advantage, rifling home a slap shot from the blue line to give Traktor a vital victory.

Earlier Traktor took a first period lead through Anton Glinkin, who reacted first to the rebound of Stanislav Chistov’s shot. That advantage held until midway through the third session when David Ullstrom tied it up on the power play. But with Sibir struggling to get shots on Michael Garnett’s net it was little surprise that the game went to overtime – nor that Traktor emerged victorious on the night. 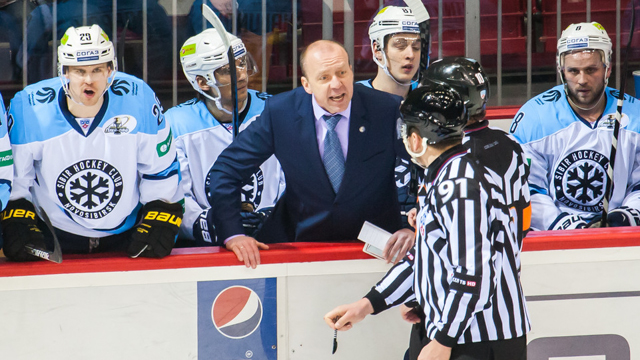 After three games of cagey hockey Salavat Yulaev and Metallurg Magnitogorsk finally let fly with a goal-fest – and Sergei Mozyakin was at the heart of the action.

Magnitka’s captain and the KHL’s all-time top scorer got a hat-trick as well as a superb assist on Danis Zaripov’s go-ahead goal in the second period to lead his team to a victory that puts the defending champion just one game away from the Conference semi-final.

The start was all about Salavat Yulaev: looking to break the pattern of low-scoring games the home team started at a high tempo, pushing Magnitka out of the neutral zone and racing into a 2-0 lead through Teemu Hartikainen and Denis Khlystov. Mozyakin struck twice before the first period ended, but between those Ivan Vishnevsky got a third for Salavat.

The game changed in the middle session though as the visitor scored three unanswered goals. Vladislav Kamenev tied it up before Mozyakin inspired the best goal of the night, taking the puck coast to coast and shrugging off the attentions of the defense to feed the puck to Zaripov on the slot. A lofted finish was enough to put Metallurg up for the first time on the night.

Tim Stapleton extended that lead before the second intermission with a long range shot that deceived Vladimir Sokhatsky on its way through a crowd of players.

Vishnevsky’s second of the night gave Salavat Yulaev hope with four minutes to play, but Mozyakin smashed home his hat-trick goal to secure the win. 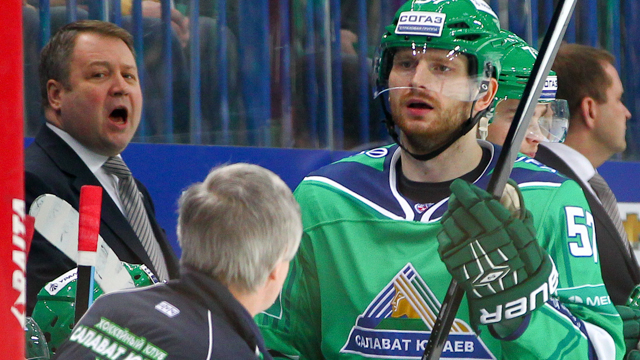 Avangard tied its series with Barys after breaking its two-game goal drought to win 4-3 in Astana.

After Jan Laco celebrated two successive shut-outs to put the Kazakhs ahead in the series Avangard’s head coach Raimo Summanen promised that his team would work on cutting out its errors on offense. The lesson was clearly learned quickly: two goals in the first eight minutes saw Denis Kulyash and Chad Kolarik put the Siberians in control.

Barys was in no mood to give up without a fight, though, and a much-improved second-period performance saw Nigel Dawes pull one back before Roman Starchenko tied the scores early in the third. Time for Avangard to take a quick refresher course in learning from those mistakes?

In truth it was penalty trouble that killed off Barys’ hopes. Although the home team didn’t concede on the penalty kill as it picked up two minor infringements in short order, the momentum pivoted back towards Avangard and Ivan Fishchenko and Anton Kuryanov took advantage to put the game out of reach of the home team. Alexander Popov even had the luxury of spurning a penalty shot as his team prepared to go back to Omsk with the series level despite a late marker from Dawes. 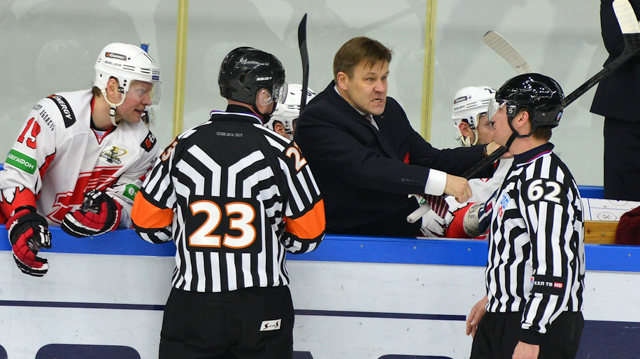