CSKA became the first team to confirm its play-off progress, wrapping up a series sweep with a comprehensive win in Sochi.

The game remained competitive until the third period, despite CSKA taking an early 2-0 lead through Alexander Radulov and Damir Zhafyarov. Andre Petersson got one back for Sochi before Jan Mursak made it 3-1 and chased starting goalie Andrei Gavrilov to the bench.

Ilya Krikunov made it 2-3 in the 33th minute and Sochi came out for the final session knowing that it could still keep the series alive with a strong showing in the last 20 minutes. Igor Grigorenko, however, had other ideas. He scored twice in two minutes to put his team 5-2 up and put the game – and series – out of Sochi’s reach. Evgeny Artyukhin completed the scoring as CSKA earned a week’s rest before returning to action in the Conference semi-final. 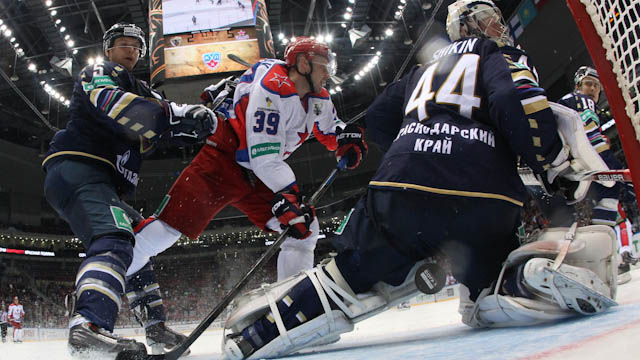 SKA produced a second solid road win to take complete control over its series against Torpedo. Apart from a blip in Game 2 the Petersburg team has always looked to have the measure of its opponent in this Conference quarter-final and Tuesday night’s game was another example of its superiority.

Torpedo struggled to create any kind of a threat around SKA’s goal in the first period, mustering just four shots on Mikko Koskinen’s net. The visitor went to the intermission 1-0 up thanks to Tony Martensson’s 14th minute marker.

The second period saw Torpedo turn the tables in terms of shots – outshooting SKA 14 to 5 – but lose further ground on the scoreboard. Ilya Kovalchuk – whose game-winning performance on Monday served notice that SKA’s star might be returning to peak form – made it 2-0 and when Evgeny Dadonov took it to 3-0 in the 38th minute there was only one outcome for this game.

Andrei Potapov got a late consolation goal for the home team but when the action returns to Petersburg on Thursday SKA will be confident of finishing the job. 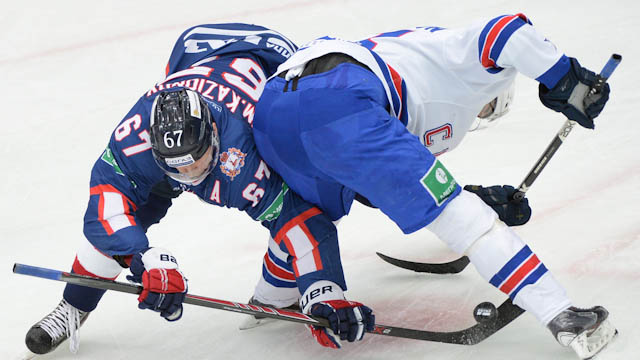 In a repeat of last year’s series Lokomotiv and Dynamo will play game five in Moscow with the scores locked at 2-2.

The Blue-and-Whites bounced back from Monday’s overtime disappointment to shut-out an opponent deprived of the services of Sergei Plotnikov on offense after his brawl at the end of the first period in game three. That reduced firepower took its toll as Dynamo scored first in a game for the first time in this series.

It came from Alexander Osipov on a delayed penalty call in the 29th minute, firing home a wrist shot from the center of Loko’s zone. Dynamo went to the second intermission 2-0 up thanks to young Vladimir Bryukvin’s second goal of the play-offs. He scored from the slot off a Konstantin Volkov pass.

Lokomotiv desperately needed goals in the third but encountered a Dynamo team playing disciplined hockey and offering few shooting chances. Indeed, the home side didn’t manage to get the shot count into double figures in any of the three periods in the face of a well-drilled display from the visitor. Denis Kokarev added a third for Dynamo to add some gloss to the final scoreline and take us back to Moscow with nothing to choose between these two old rivals. 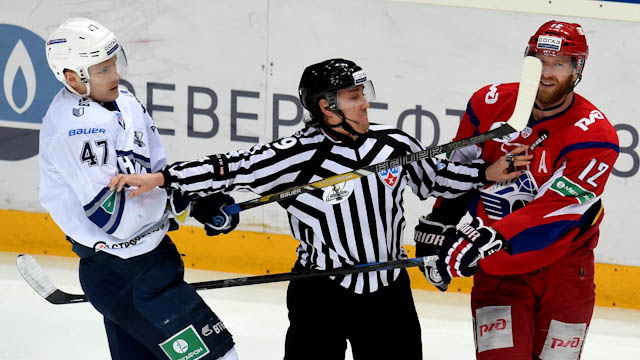 Dinamo Minsk found a way to silence the leading play-off point-scorer Linus Omark, but could not stop Jokerit opening up a 3-1 lead in this series before the action returns to Helsinki on Thursday.

The decisive action came in the second period once again, and while it lacked the frantic excitement of yesterday’s quickfire goal blitz it offered instead a tense, hard-fought spectacle with the result in the balance until the final hooter.

After a scoreless opening Dinamo went ahead when Lukas Krajicek fired home on the power play early in the second. But the scores were soon level thanks to a slightly freakish goal from Juhamatti Aaltonen. He broke from his own zone, exchanged passes with Niko Kapanen and fired in a shot that deflected crazily and looped over Dmitry Milchakov.

Kapanen was also involved in the winner, claiming an assist on Niklas Hagman’s power play goal in the 29th minute. After that Jokerit was charged with closing the game down and keeping Dinamo at arm’s length, something it achieved effectively in a third period where it allowed just five shots on Riku Helenius. Only a 20-minute penalty for Aaltonen, awarded after the final hooter, could put a dampener on Jokerit’s day. 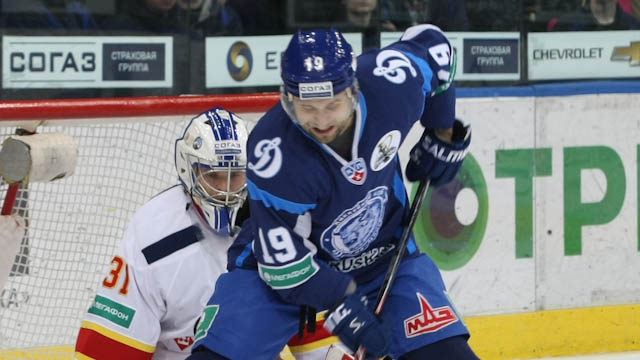