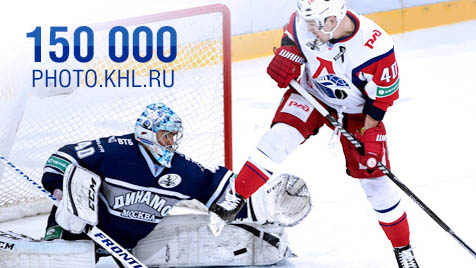 The Kontinental Hockey League Photo Agency has been a source of immense pride throughout its six-year history, not least because it is absolutely unique – no other sporting league in Russia can boast anything to rival it. In addition to stunning action pictures, the KHL Photo Agency has an extensive archive of off-ice and historical photographs from the 1990s right up to the present.

Each day the Agency’s reel of the latest images displays a wealth of exclusive photo-reportage from all the crucial hockey events which resonate around the sporting world. The KHL Photo Agency enables Russia’s leading print and electronic media to illustrate the latest developments in the sport, and also provides images for numerous themed media and advertisers. The Agency’s customers include several publications from other countries around the world.

The staff photographers have vast experience in covering the biggest hockey tournaments, and their work has earned them prestigious awards from the International Ice Hockey Federation and the International Sporting Press Association.

On Saturday, the 28th of February, the Agency reached another significant milestone in its distinguished history, when Vladimir Bezzubov - legendary photographer and the founder of the Agency – shot a series of stunning pictures while on duty at the Dynamo versus Lokomotiv play-off game, and in doing so took the number of images stored in the League archives past the 150,000 mark. The historic picture shows Dynamo goalie Alexander Lazushin making a vital pad save while under pressure from Lokomotiv forward Daniil Apalkov.

We would like to congratulate our colleagues at the KHL Photo Agency on this impressive achievement and wish them continued success for the future.
Share
Прямая ссылка на материал