Avtomobilist won its first play-off game since March 14, 2010, to claw its way back into its series with Ak Bars thanks to a 2-0 victory on home ice.

The Motormen had twice taken games to overtime in Kazan only to lose out, but back in the Urals there was no mistake. A solid defensive display, backstopped by 34 saves from Jakub Kovar, laid the foundations; goals from Alexander Nesterov and Alexander Rybakov secured the win.

Nesterov’s goal came first, in the eighth minute. He rounded off a counter-attack, collecting Alexei Mikhnov’s pass in front of goal and putting the puck top shelf on the backhand. The second came on the power play midway through the third period. Alexei Simakov was the architect, patiently waiting for the right moment to deliver the killer pass before picking out Rybakov who fired a one-timer into the unguarded portion of Anders Nilsson’s net.

The win puts Avtomobilist back in contention for this series – but Anatoly Yemelin’s team might do well to remember what happened last time it won a play-off game: the subsequent match against Salavat Yulaev ended in a crushing 8-1 loss.

Four goals in two minutes blasted Sibir to a big win in Chelyabinsk. The game had been a close-fought battle up until the halfway mark, but after that the visitor powered its way into complete control thanks to a stunning blitz on Traktor’s net.

The collapse began when Dmitry Pestunov received a 5+20 penalty for a check to the neck area and Vitaly Atyushov joined him in the sin bin with a minor for tripping. Traktor survived two minutes of 5-on-3 hockey, but it all went wrong after that. Jonas Enlund began the rout on 32:27, converting a power play from the slot to put Sibir 3-2 up. Seventeen seconds later Stepan Sannikov made it 4-2 and Traktor called a time-out. That failed to find the necessary words, though, and Dmitry Monya scored Sibir’s third in less than a minute. Goalie Michael Garnett was replaced with Vasily Demchenko, but the new arrival was soon beaten as Sergei Shumakov made it 6-2 on 34:12, completing an incredible scoring sequence.

Demchenko did have some consolation when he saved a penalty shot from Enlund right before the intermission but it was too late to change the course of the game.

Earlier Patrick Hersley put Sibir 1-0 up with an early power play goal but Andrei Popov and a Stanislav Chistov penalty shot gave Traktor the edge going into the first intermission. Maxim Shalunov tied it up early in the second and went on to get his team’s seventh goal late on; his two strikes were the only goals Sibir managed at equal strength. 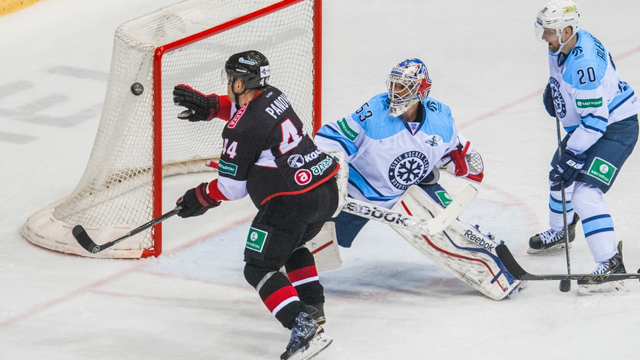 The 22nd second play-off meeting between these teams was yet another hard-fought clash as the two old foes refused to give an inch in an absorbing spectacle.

Victory went to Metallurg, but the defending Gagarin Cup winner had to dig deep to secure its 2-1 success, especially after playing short-handed for the last four minutes of the game.

The game was evenly poised throughout, with a rare defensive error separately the teams after the first period. Magnitka’s defense gave Alexander Stepanov an opportunity from close range, and he fired Salavat Yulaev in front two minutes before the intermission.

Metallurg tied it up on a penalty kill; Oscar Osala got the goal, breaking out of defense to convert a one-on-one rush. It was third time lucky for the Finn, who had twice been denied on earlier, similar raids. The winner came seven minutes later with Magnitka’s powerful top line wheeled out on the power play. Not for the first time – and surely not for the last – the gambit paid off: Jan Kovar and Sergei Mozyakin engineered time and space for Viktor Antipin at the back post and even though the D-man’s first contact was uncertain he was able to recover and score at the second attempt.

Salavat Yulaev might have tied it up in the third, particularly after Denis Platonov took a 2+2 penalty for high sticking in the closing minutes, but this time it was not to be. Magnitka edges in front in the series ahead of tomorrow’s game four. 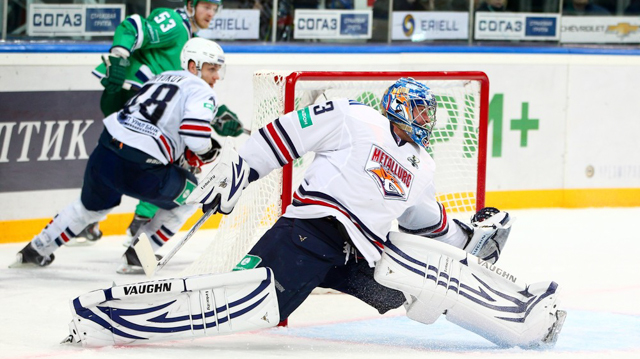 Avangard failed to score against Barys for the second game running as 41 saves from Jan Laco kept the Siberians at bay and helped the Kazakhs take a 2-1 series lead.

After failing to score in the previous game Avangard’s head coach Raimo Summanen complained that his players had made a hero out of the opposition goalie, and they failed to heed that lesson here. Admittedly an injury to Denis Parshin did not help but once again the Omsk team failed to create enough chances or take the ones that it could fashion.

At the other end Barys produced clinical finishing when it mattered to claim the win. Konstantin Rudenko got the first in the 7th minute, finding space on the power play to open the scoring. Nigel Dawes made it 2-0 midway through the second, taking the initiative himself on a counter attack and getting his shot away despite the close attentions of a defenseman. Dawes than had an assist as Dustin Boyd completed the scoring in the third. 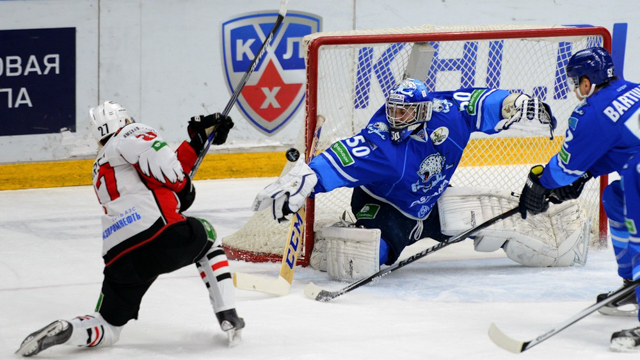