Most of the Conference Quarter Final series, be they in East or West, have been close-run affairs. But for CSKA there has been little difficulty finding a way past HC Sochi and the Army Men are just one step away from becoming the first team to march in the next round.

A 2-1 win beside the Black Sea makes it 3-0 in the series, and while the 2-1 scoreline might suggest a close game the reality is that CSKA always had the edge here. Even in the first period, when Sochi grabbed the lead through Mikhail Anisin, the home team was limited to just three shots on goal as the visitor had the bulk of the play.

Once again, though, Sochi proved tough to break down. It wasn’t until the last seconds of the middle session that Alexander Radulov tied the scores with his first goal of this season’s play-offs. The home defense gave up possession too easily in its own zone and Vladimir Zharkov circled the net before feeding Radulov for a close-range finish.

The winner came late in the game when a swift counter-attack saw Igor Makarov set up Evgeny Korotkov for the decisive score in the 58th minute. 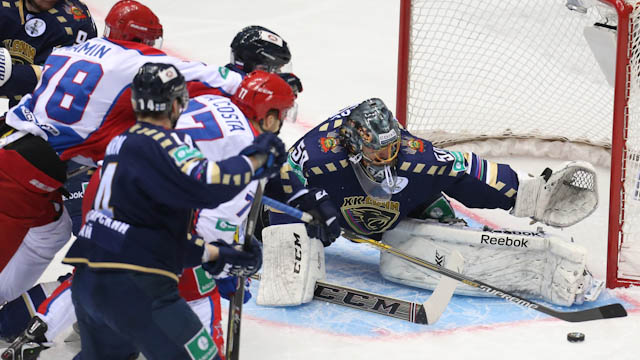 Two goals in six seconds gave SKA a 4-2 win at Torpedo – but the Petersburg team once again showed signs of fragility before getting the win.

The first period in Nizhny Novgorod went exactly according to the visitor’s script: Evgeny Dadonov and Ilya Kovalchuk scored two power play goals as Torpedo mustered a meager four shots on goal. But the first stages of the middle session saw the Army Men run into penalty trouble and Torpedo twice capitalized through Vadim Krasnoslobodtsev and Wojtek Wolski.

But with the game in the balance Kovalchuk got his second of the night, again on a power play, before a howler from Artyom Blazhievsky took the game away from Torpedo. Straight from the face-off the defenseman inexplicably missed the puck on his own blue and Dadonov raced through to pounce on the error and make it 4-2 with the only goal of the night that came at equal strength. SKA was content to shut the ice down in the third and take the initiative in the series once again. 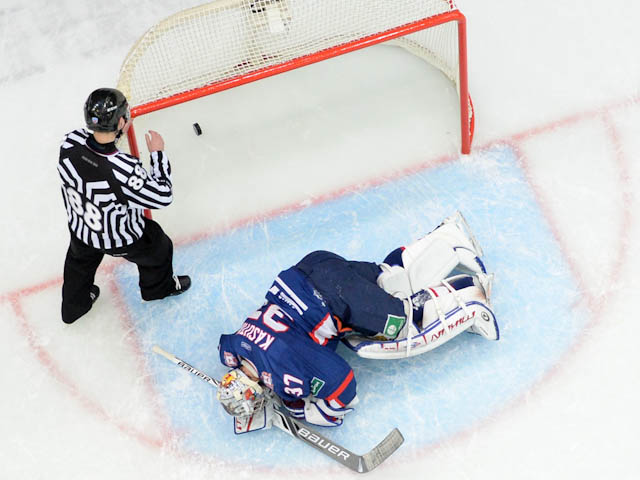 Many thought that the series between Lokomotiv and Dynamo would be the closest of the battles in the West and so far results seem to be bearing out that expectation. The two games in Moscow showed that there was little to choose between these teams and the first meeting in Yaroslavl was another hard-fought encounter that went into overtime before the home side took the honors – and a 2-1 lead in the series.

The winning goal came on 70:26 when Daniil Apalkov fired in a shot despite the close attentions of Maxim Solovyov. His effort thudded into Alexander Lazuhsin’s shoulder and looped up over the Dynamo goalie and dropped into the net.

The game had started as an even contest but Lokomotiv took its chance and went ahead in the 15th minute thanks to Martin Thornberg. He fired home the rebound from an Emil Galimov shot to give his team the opening goal for the third time in three games.

Neither side was willing to give an inch, and Loko’s Sergei Plotnikov sparked a brawl in the final minute of the first period, charging into Kaspars Daugavins after the latter was called offside. After a brief skirmish involving most of the players on the ice Plotnikov was ejected from the game and minor penalties were handed out to three other players.

Dynamo levelled the scores deep into the third period; Loko lost possession in center ice and Alexei Sopin advanced to test Curtis Sanford. But the goalie uncharacteristically lost the flight of the puck, giving up a huge rebound for Sergei Soin to rifle into the net.

After a scoreless third session we almost had a winner early in overtime when Alexei Tsvetkov wrapped his stick around Kirill Kapustin’s ankles as the Lokomotiv man lined up a shot. Kapustin got a second chance with a penalty shot, but Alexander Lazushin kept him out. 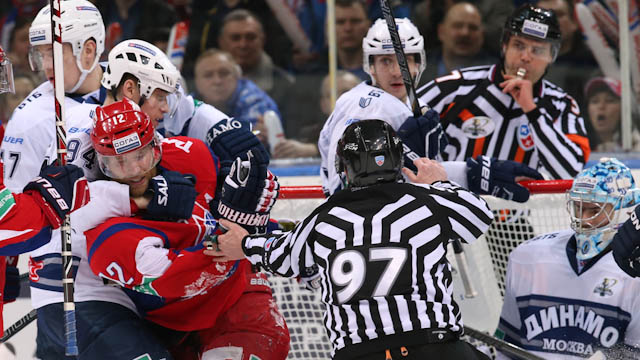 A second-period blitz powered Jokerit past Dinamo Minsk to take a 2-1 lead in the series.

After a scoreless opening session the Finns stunned a capacity crowd in Belarus with a five-goal salvo in the middle period. Those goals came from just 11 shots on goal, with starting goalie Lars Haugen chased from the net after the fourth went in.

Linus Omark was the architect of the Jokerit assault, picking up two goals and two assists, opening the scoring on the power play in the 22th minute when his attempted pass deflected off Oleg Goreshko and went into the net. Another power play brought another Omark goal in the 30th minute and Dinamo folded after that. Tommi Huhtala and Juhamati Aaltonen added two more in the next three minutes before Steve Moses added a fifth past replacement goalie Dmitry Milchakov in the 36th minute.

The third period saw Dinamo create more on offense, firing in 10 shots on goal to Jokerit’s two, but there was no way back for the home team. Henrik Karlsson finished with 27 saves to record his first post-season shut-out in the KHL. 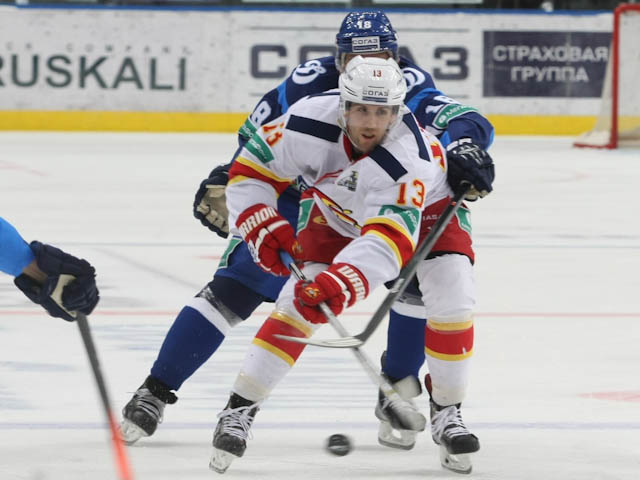