For the second night running it took overtime to separate Ak Bars and Avtomobilist – but this time the visitor was left stunned by a last-gasp smash-and-grab from the Eastern Conference’s leading team.

Once again the game was tied at 2-2 in regulation, and once again Ak Bars won it with a power play goal from Oscar Moller early in the extras. But beyond the headline, the back story was very different.

Avtomobilist was within two minutes of a victory that would have taken the series to Yekaterinburg at 1-1. Eduard Lewandowski put the visitor ahead midway through the second period and Artyom Gareyev doubled that lead early in the third. With Jakub Kovar stopping everything Ak Bars could throw at him, it seemed that time was running out of the home team to save itself.

But this is a roster steeped in play-off experience and renowned for snatching results from unlikely situations. On 57:45 Artyom Lukoyanov made it 1-2, and before there was even time to consider withdrawing goalie Anders Nilsson for a final storm, Jason Azevedo tied it up on 58:04.

Avtomobilist was shell-shocked and ran into further trouble when Tobias Viklund took a holding penalty early in the extras. Moller got the power play winner for the second night in a row; Ak Bars is in command of the series – but only just. 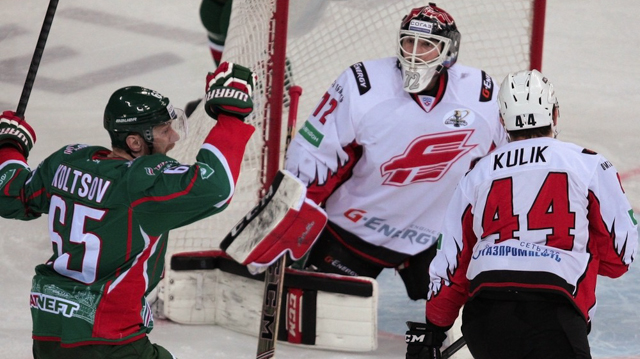 Sibir scored three short-handed goals – a new play-off record – to beat Traktor 5-2 and tie the series. After yesterday’s defeat the Siberians welcomed first-choice goalie Alexander Salak’s return from suspension and that helped to contribute to a change in fortune.

Initially the game moved slowly, with few shots at either end in the opening exchanges but gradually Sibir began to take the initiative. Alexander Sannikov got the opening goal just before the first intermission and after Sibir failed on a 5v3 power play Maxim Shalunov made it 2-0 with a short-handed effort.

Traktor then upped its game with Saturday’s hero Deron Quint coming to the fore once again. He sent Martin Ruzicka clean through on Salak to reduce the deficit and followed up with a power play goal early in the third after Sergei Shumakov picked up a major penalty for slashing.

But the Traktor power play got it all wrong in the 43rd minute, allowing Jarno Koskiranta a clear run on goal that was halted only by a foul from Dmitry Pestunov. The Finn had no troubled dispatching the penalty shot to put Sibir 3-2 up. Koskiranta got his second of the night – and his third of play-offs – a few minutes later and another short-handed strike from Shalunov completed the scoring. 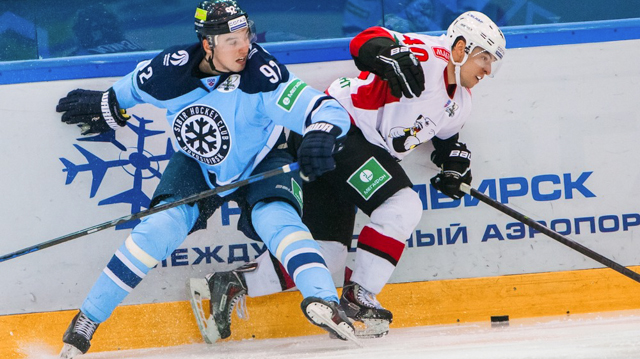 Two Finns and two goals – one early, one late – were enough to give Salavat Yulaev a 2-1 win at Metallurg Magnitogorsk and the send the teams to Ufa with the series poised at 1-1.

Magnitka had the early opportunities as Salavat offered up a series of penalties, but could not convert even when presented with 96 seconds of 5v3. Instead it was Teemu Hartikainen, one of the offenders, who opened the scoring in the 7th minute, converting Anton Slepyshev backhand pass from behind the net.

The lead endured until the 50th minute before Danis Zaripov tied things up. It was a well-taken effort, receiving the puck with his back to goal and shrugging off the attentions of … to swivel and whip a low shot past Vladimir Sokhatsky.

However it wasn’t enough to save Magnitka. Four minutes later Hartikainen swept round the back of the home net and popped the puck into the slot where Antti Pihlstrom got the better of Jan Kovar to score from close range. Salavat closed out the last five minutes and heads home full of confidence with the series level. 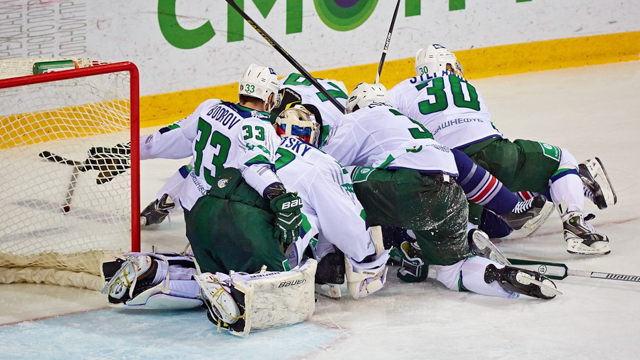 Two goals in the first period saw Barys get its first win of this season against Avangard and tie the series with a 2-0 scoreline.

Barys suffered a blow going into the game with the loss of forward Brandon Bochenski, but it was Avangard that ran into difficulties on the ice, giving up two early penalties. The second of those cost the Omsk team the services of Felix Schutz for the rest of the evening and Dmitry Upper maximized the punishment during a five-minute major.

In the 16th minute Talgat Zhailauov surged down the boards and his pass flew into the slot. Two Barys players, Andrei Gavrilin and Fyodor Polishchuk, thrust their sticks at it and the goal was credited to the latter. Avangard goalie Konstantin Barulin was promptly recalled to the bench.

From that point on Barys was content to keep Avangard at arm’s length and the host was unable to respond to the challenge and create dangerous opportunities. Jan Laco achieved his first play-off shut-out and Barys managed its first win over Avangard in seven attempts. 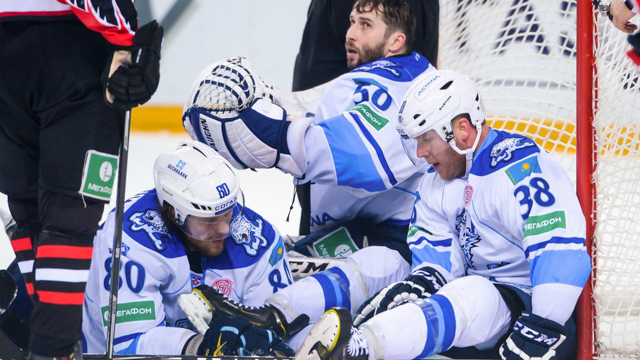