Ak Bars made a winning start to its play-off series against Avtomobilist – but the Eastern Conference leader was pushed all the way by the outsider.

It took overtime to separate the teams, with Oscar Moller finally snapping a 2-2 tie in the 6nd minute. He got the decider on the power play to stop the clock at 61:26, much to the relief of the host.

Earlier Avtomobilist had startled the home crowd by taking an early lead thinks to a power play goal from Tobias Viklund in the eighth minute. Home nerves were calmed within seconds, however, when the video official gave the thumbs up to an equalizer from Alexander Svitov. By the first intermission Ak Bars was up 2-1 thanks to Igor Mirnov on the power play, but that wasn’t the end of Avto.

The Yekaterinburg team tied it up early in the second through its rising star Anatoly Golyshev, and thoroughly deserved to take the game to overtime, matching Ak Bars almost shot-for-shot. However, a late four-minute penalty called on Sergei Gusev for high sticking proved costly as Ak Bars capitalized on its power play to win the game. 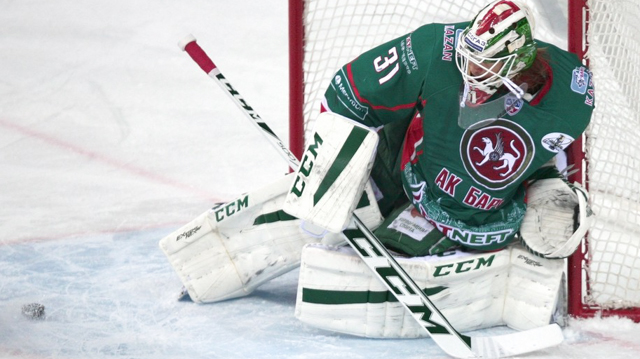 Traktor’s American defenseman Deron Quint was part of the roster that went all the way to the Gagarin Cup final two seasons ago – and he produced a match-winning display at the start of this year’s campaign to down Sibir.

The Eastern Conference runner-up has impressed many with its successful restructuring after the departure of head coach Dmitry Kvartalnov last summer, but found itself on the wrong end of a 4-1 scoreline as it opened its post-season in Novosibirsk.

The early signs were encouraging: Jarno Koskiranta converted the game’s first power play to give Sibir a sixth-minute lead, but Quint hit the target after Ivan Bereshchagin was sinbinned, tying the game in the 15th minute. Francis Pare made it 2-1 45 seconds later and the narrative was irrevocably rewritten.

A second Sibir penalty was punished in the 26th minute as Quint had an assist on Ilya Davydov’s goal and the D-man completed the scoring late on to put Traktor ahead in the series. 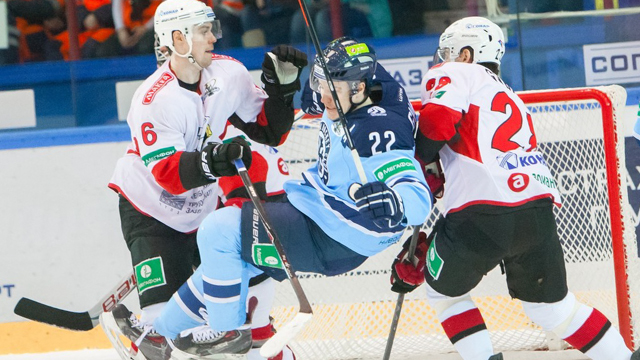 Last season’s Gagarin Cup winner Metallurg Magnitogorsk picked up a 2-0 win against Salavat Yulaev in its first post-season game of this campaign. Scoring star Sergei Mozyakin, whose goals fired Magnitka to glory a year ago, was back on target to claim yet another game-winning goal in play-off hockey.

The decisive action all came in the second period. First Salavat Yulaev’s Evgeny Skachkov was ejected from the game for kneeing Sergei Tereshchenko. Then, during the major penalty that followed his offense Magnitka scored twice. Mozyakin got the first with a one-timer from the deep slot after his line-mates worked a triangle of passes out from behind the net.

Shortly afterwards it was 2-0, with Tim Stapleton left with all the time in the world to score from close range off a Tim Brent pass. That left Salavat Yulaev somewhat shell-shocked, and even a 5-on-3 advantage for the visitor deep in the second session couldn’t give them a way back into the game.

The third period saw the Ufa team work hard to try to reduce the deficit but there was no further scoring, even though both teams hit the piping the final minute. Magnitka goalie Vasily Koshechkin finished with 24 saves to claim his shut-out. 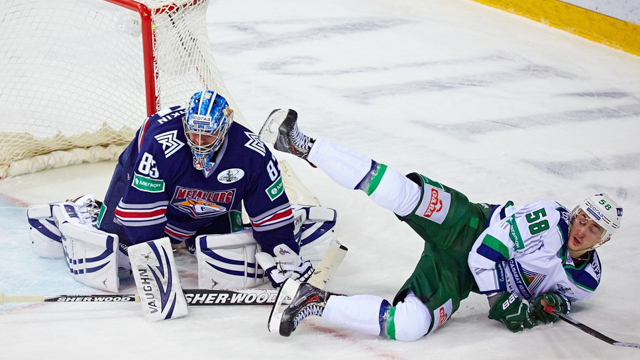 There were three goals in the last minute in Omsk, but they did little to affect the outcome of a game that Avangard won 5-2.

Barys was first to show here, with Konstantin Pushkaryov opening the scoring in the sixth minute, but that was as good as it got for the Kazakh team. Denis Kulyash tied it up on the power play late in the first period and from that point on Avangard always had the edge.

A shorthanded effort from Felix Schutz put the home team up early in the second and Vladimir Sobotka extended that lead in the 47th minute before a crazy flurry of goals in the final moments. Pushkaryov got his second of the night, but that was sandwiched between two empty net goals, one each for Vadim Khomitsky and Alexander Perezhogin. Avangard will hope for a similarly clinical display when the teams meet again Sunday. 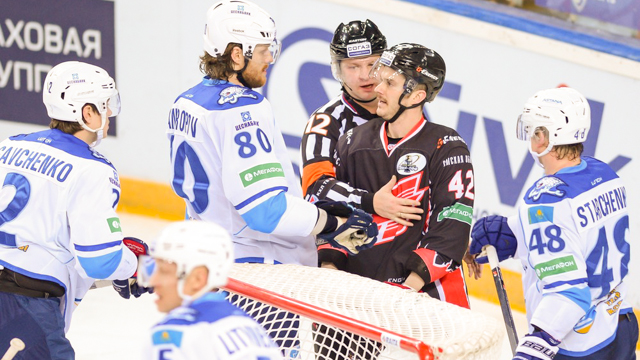