CSKA took a 2-0 lead in its series against HC Sochi in a game that closely resembled Friday night’s opener.

A first-minute goal, this time from Igor Makarov, set the Army Men on the road to another victory, but once again it took time for the home team to translate its supremacy on the ice into a comfortable advantage on the scoreboard. Sochi did well to keep things competitive but ultimately gave up a second deep in the middle session. Stephane da Costa found the net, while goalie Kevin Lalande picked up an assist to become the first netminder to pick up a point in this year’s play-offs.

Lalande’s next significant action was a less happy moment for him: in the 42nd minute he conceded his first goal of the post season, exactly 101 minutes after he started his play-off campaign. Mikhail Anisin, once the inspiration behind a Dynamo Moscow Gagarin Cup triumph, had the honor of claiming Sochi’s first ever play-off marker and ensured that CSKA could not afford another defensive lapse in the closing stages.

But the game was destined to go the way of the home team, with Igor Volkov completing the scoring in the 51st minute. CSKA wins 3-1 on the night and takes a 2-0 series lead to the Black Sea. 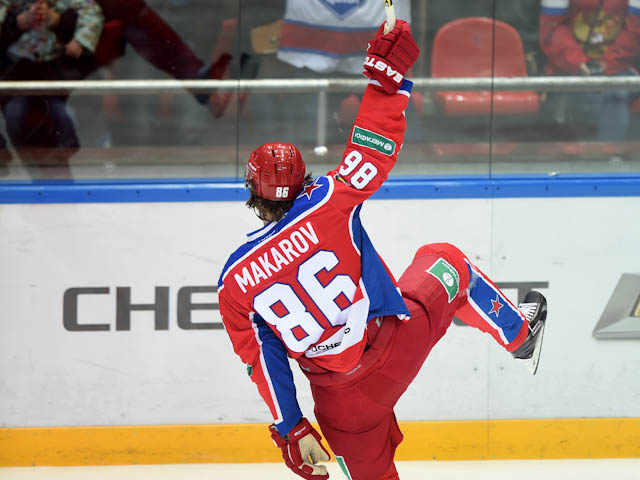 SKA’s comfortable win last night was slightly marred by a lackluster third-period showing, and the men from Petersburg suffered from something of a hangover as they produced a sluggish start against Torpedo on Saturday.

The visitor opened up a 2-0 lead inside the first 10 minutes before keeping SKA at bay to claim a 2-1 win and tie the series ahead of Monday’s trip to Nizhny Novgorod.

The Army Men of the north reduced the deficit fairly quickly, with Roman Rukavishnikov taking the initiative to pull one goal back, but the anticipated siege never quite materialized. Viktor Tikhonov missed a good chance on the power play late in the first and Andrei Kuteikin had visiting goalie Ivan Kasutin scrabbling around in his crease late on, but for the most part Torpedo defended calmly to see out the game and level the series. 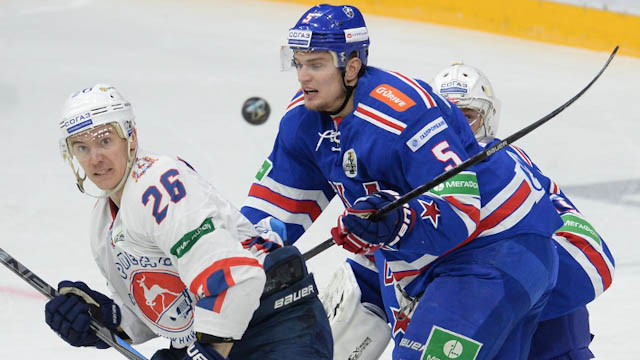 There is rarely much to choose between Dynamo Moscow and Lokomotiv and this series is already shaping up to be another intense, hard fought battle after Loko tied it up at 1-1 in the capital.

As in the previous game the visitor took a first period lead with Sergei Plotnikov wrapping up a slick passing move to convert a power play in the 17th minute. This time, though, Dynamo was unable to hit back so effectively as a hard fought second period remained goalless.

The home team did manage to tie it up through Martins Karsums in the 49th minute but Loko soon went back ahead. Ilya Gorokhov’s slap shot was deflected past Alexander Lazushin by Geoff Platt to win the game and send the teams to Yaroslavl with the series in the balance. 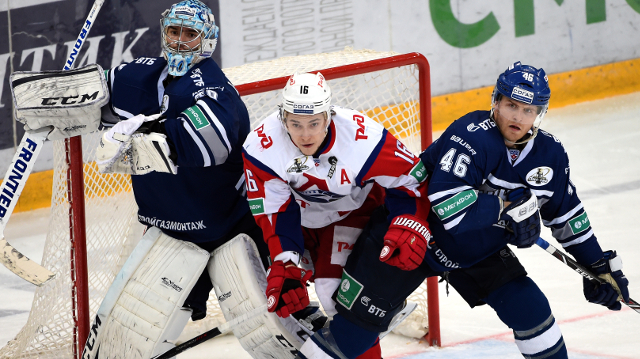 Jokerit put its overtime disappointment behind it in some style to down Dinamo Minsk 4-1 and tie its series.

At first it seemed that the home team might be suffering something of a hangover after its painful loss on Friday night: the first period belonged to the visitor, although the post twice denied the Finns.

But once Steve Moses opened his post-season account with an emphatic one-timer off a Linus Omark pass the atmosphere around the arena was lifted and the team moved on to victory. Admittedly there was one brief hiccough when Nick Bailen tied it up, completing a well-worked move in the 26th minute, but a piledriver from Oscari Korpikari whipped past Sergei Milchakov as Riku Hahl and Ivan Svarny wrestled for position in front of the net. The video ref gave the thumbs up, and from then on there was only one team in it.

There was some controversy over Jokerit’s third goal; Tommi Huhtala’s finish in a close-up duel with Milchakov brooked no argument, but Lukas Krajicek was certain he had been fouled as he coughed up the puck in his own zone. The officials were unmoved and Jokerit led 3-1.

The previous evening Finnish coach Erkka Westerlund complained that his team was ‘too passive’ in defense, but there was no sign of that mistake being repeated here. A solid, well-drilled display ensured there were few alarms for Henrik Karlsson to respond to and a Tomi Maki empty-netter send another big home crowd into raptures.