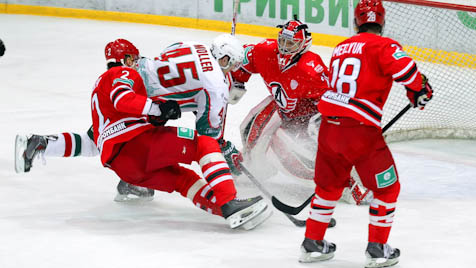 (1) Ak Bars Kazan vs (8) Avtomobilist Yekaterinburg
This time last year Zinetula Bilyaletdinov was public enemy number one in Russian hockey after his team’s failure to win an Olympic medal in Sochi. Now he’s out to rehabilitate himself in front of another notoriously tough audience in Kazan, where adulation for his past achievements with Ak Bars is tempered by a lack of patience with anything less than the best from the men in green.

That might explain why, despite topping the Eastern Conference, the Tatar team has still faced criticism this season. It’s true that Ak Bars has not dominated the East in the way that CSKA has dominated the West; indeed it’s noticeable that this conference has been fairly competitive down to about sixth place while the west shows a clear gap between the big boys and the rest. But it’s unfair to suggest that this team lacks what it takes in the big games, especially considering its 5-1 thrashing of SKA in Petersburg and its home wins over Dynamo Moscow and Magnitka.

Coach Bill has brought stability back to his team and enjoys perhaps the strongest defensive roster in the competition: few others could rest players of the experience of Evgeny Medvedev, Ilya Nikulin or Yakov Rylov without suffering a sharp dip in results. With a team and a coach that have ‘been there, done that’ at the highest level, there is every likelihood that Ak Bars will get deep into these play-offs.

Avtomobilist, meanwhile, are a tribute to patience and faith in a long-term project. After 12 defeats in the first 14 games – including three against Ak Bars – many clubs would have hit the panic button, fired the head coach and frantically looked for a new beginning. Avto trusted Anatoly Yemelin to turn it round, and that faith was rewarded with a play-off spot. Goalie Jakub Kovar stepped up his game, producing a league-leading 8 shut-outs; World Junior silver medallist Anatoly Golyshev also emerged as a dangerous forward and a player who will surely have come to the attention of bigger clubs.

The Motormen are likely to reach the end of the road in Kazan – and for many members of an aging squad it might prove to be a last hurrah. But the example of backing a coach to get it right after a slow start is one that other clubs might benefit from looking at more closely. 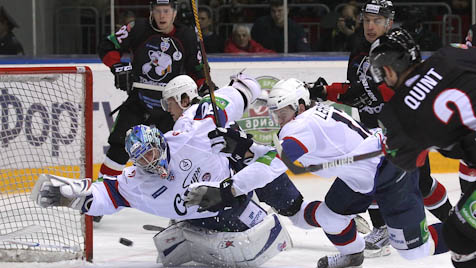 (2) Sibir Novosibirsk vs (7) Traktor Chelyabinsk
Sibir has been the surprise package of this season – and enormous credit goes to the work of general manager Kirill Fastovsky. The Siberians enjoyed their best-ever campaign last time out, dumping Ak Bars out of the play-offs under the guidance of Dmitry Kvartalnov. But Kvartalnov moved to CSKA, flying Finn Jori Lehtera departed for the NHL and it seemed fair to assume that Sibir would revert to its habitual middling position.

Not a bit of it. Andrei Skabelka took the hot seat and maintained the momentum of the previous campaign, while Fastovsky’s shrewd dealings on the transfer market impressed everyone. His greatest achievement, perhaps, was negotiating the deal that took goalie Mikko Koskinen to SKA. In return Sibir got not only an equally competent netminder in Alexander Salak, but also a promising young D-man and a transfer fee. Salak, however, will be suspended for the start of the play-offs.

Traktor, much like Avtomobilist, recovered from a sluggish start to make it into the play-offs. Unlike Avto, however, the Chelyabinsk team dispensed of the services of newly appointed head coach Karri Kivi quickly and abandoned its international experiment to look within once again. Andrei Nikolishin, who was recently turning out on the ice for Traktor, took charge and nurtured his team back to form. The arrival of Francis Pare from Magnitogorsk certainly helped, as did the creation of the Popov-Pestunov-Glinkin strike force, but perhaps the key factor was Nikolishin’s ability to rekindle a team spirit in a locker room that had been left bewildered by Kivi’s approach. Coach and team alike are still learning their trade, but at last there are signs that Traktor is getting over the loss of star players like Petri Kontiola and Evgeny Kuznetsov and building for the future.

In a series between two teams in transition, the outcome could prove rather closer than the league table suggests. Sibir’s formed dipped slightly towards the end of the regular season, and while the opportunity to rest up a little before the play-offs can be beneficial, much will depend on how quickly the team can regain its intensity as the business end of the season gets underway.

Last year:
Sibir -lost to Metallurg Magnitogorsk (0-4) in the Conference semi-final
Traktor - failed to qualify for the play-offs 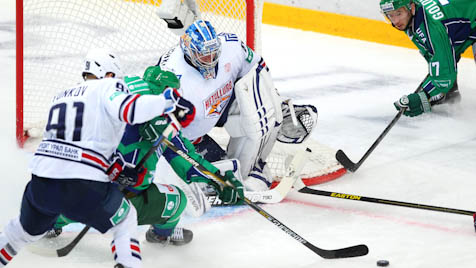 (3) Metallurg Magnitogorsk vs (6) Salavat Yulaev Ufa
Defending champion Metallurg Magnitogorsk saw its all-powerful top line becalmed at times this season. An injury to Sergei Mozyakin after a clash with Martins Karsums of Dynamo Moscow put a big dent in the team’s scoring options and tarnished some of the fearsome invincibility that Mike Keenan’s roster had enjoyed for so long.

That’s not to say that Magnitka became a poor team overnight – there’s too much depth in this roster for that to happen, and the Mozyakin-Kovar-Zaripov trio continued to score freely for much of the season. Once again, though, that might be just as well for a team where goals on the other lines are not commonplace. It’s perhaps telling that defensemen Chris Lee and Viktor Antipin are both in the top six point-scorers for the club this season; both usually join the front line on the ice, with Lee collecting 37 assists as part of that link.

With all the talk about Salavat Yulaev’s financial future there have been times when it was easy to forget that there was a team out there on the ice. And for fans used to their heroes competing for top honors there have been some painful struggles this season – long losing streaks, heavy defeats against modest opposition. Goaltending has been an issue, with Vladimir Sokhatsky becoming Vladimir Yurzinov’s first choice but managing a save ratio of 90.6%, one of the lowest among the goalies likely to feature in the play-offs. The team’s offense has also looked uncertain at times, and the leading points scorer was D-man Kirill Koltsov with an impressive 18+30=48 return that proved to be the best in the league.

History suggests this will be another close confrontation, with Salavat Yulaev having the reputation of something of a bogey team for Magnitka with two previous play-off wins and two head-to-head successes this season. However Magnitka powered past its old rival in last season’s play-offs and – given the question marks over young Sokhatsky in goal – should probably progress once again. 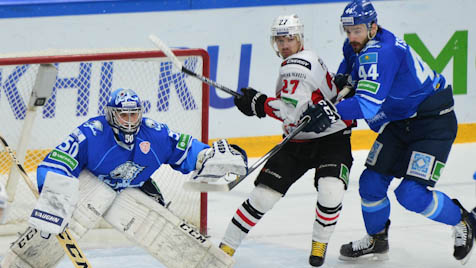 (4) Avangard Omsk vs (5) Barys Astana
After a heavy defeat in its opening game Avangard head coach Raimo Summanen announced that there was no way his team would make the play-offs. As a psychological ploy it had an almost instant effect – Avangard roared into form and demonstrated just why it was never likely to repeat last season’s chaotic failure to make the top eight. But the line-up remained fragile – unpredictable and prone to struggle when it couldn’t ice the powerful trio of Sergei Shirokov, Vladimir Sobotka and Denis Parshin. Injuries, especially to Shirokov, took a toll and a team that should have been pushing for top spot in the conference found itself becalmed. A play-off place was comfortably attained, but there was little prospect of climbing the table.

For Barys it’s been a familiar story – goals coming from its North American troika of Nigel Dawes, Brandon Bochenski and Dustin Boyd. That trio shared 62 markers between them, making it the most prolific in the regular season. The key changes came behind the bench, with the calm and contemplative Finn Ari-Pekka Selin replaced by the notoriously volatile Andrei Nazarov. The outspoken Russian coach made headlines throughout the season, ranting at Vyacheslav Fetisov about refereeing decisions in Vladivostok and throwing a bottle at an opposing player. It all served to keep the spotlight off his players, who quietly went about their business of securing a play-off spot.

Nazarov has a good record in the play-offs, taking Donbass further than expected last year, and he will be setting up exactly the kind of awkward series that can test Avangard’s fragile confidence. It looks like a clash between a team greater than the sum of its parts and a roster that has yet to really convince anyone it has quite worked out what it can do. Even though the regular season meetings all went to Avangard, this series could easily go the distance – and with two volatile men behind the benches there could be plenty of talking points on and off the ice.

Last year:
Avangard – failed to qualify for the play-offs
Barys – lost to Salavat Yulaev (2-4) in the Conference semi-final