It took a little while for the newly-crowned champion of Russia to prove its supremacy over HC Sochi, but CSKA eventually finished with a comfortable 3-0 win to record a satisfactory start to its play-off campaign.

The home team made a perfect start, taking an early lead through Simon Hjalmarsson, who saw his initial shot fumbled into the path of Stephane da Costa behind the net. The Frenchman returned the puck to give his team-mate a second chance and Hjalmarsson made no mistake to open the scoring after 47 seconds.

But that goal was not the overture to a comfortable home win; by contrast Sochi produced a rugged display that had more than enough to suggest that it can play a full part in this series. The teams were separated by a single goal until late on as CSKA created chances but were unable to put the result to bed. Finally Evgeny Artyukhin in the 57th minute and Jan Mursak into an empty net made things more comfortable for CSKA. 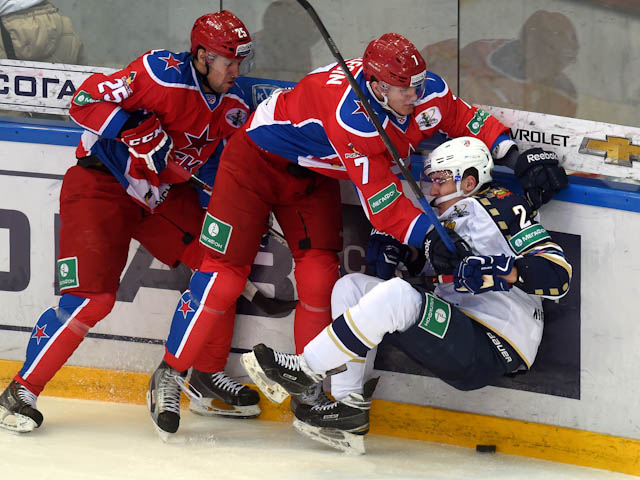 It didn’t take long for SKA to assert its dominance over Torpedo in the teams’ opening play-off meeting in St. Petersburg as a powerful attacking display delivered a 6-3 win.

The home team went into the first intermission in complete control thanks to Vadim Shipachyov, Tony Martensson and Ilya Kablukov, all inside the first 10 minutes. Jarkko Immonen pulled one back late in the period but there was no respite after the intermission. SKA added three more through Roman Cervenka, Jimmie Eriksson and Evgeny Dadonov to threaten a huge scoreline.

The final session offered some hope for the opposition: while the outcome of the game was never in doubt goals from Wojtek Wolski and Immonen reduced the deficit. Once again, questions might hover around SKA’s consistency and the reliability of its defense, two things that will be tested to the limit as the play-offs progress. 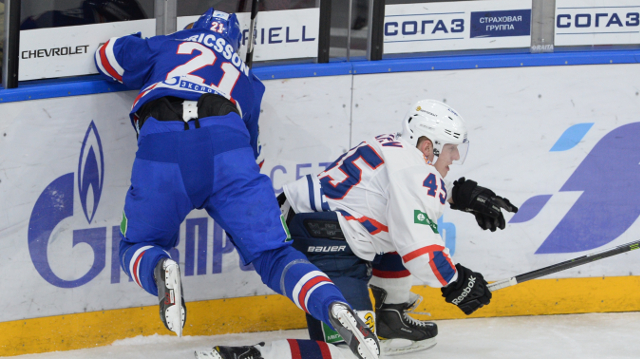 Dynamo Moscow had to come from behind to edge a narrow win at home to Lokomotiv Yaroslavl. A year ago the Railwaymen produced the shock of the season to shunt the Blue-and-Whites out of the play-offs in the first round, and it took little more than a minute for Lokomotiv to remind its opponent of that sinking feeling.

Martin Thornberg scored the opener, collecting an Andrei Loktionov shot as it thundered off the boards and revelling in the time and space afforded him to the left of Alexander Lazushin’s goal.

But Dynamo rallied in the middle session, turning the game around to lead 2-1 thanks to two goals in the 24th minute. Denis Mosalyov enjoyed some good fortune as his pass toward Denis Kokarev was deflected into the net of a Loko defenseman, but there was no luck about Vladimir Bryukvin’s goal off Filip Novak’s pass. Bryukvin marked his first ever play-off game with a game-winning goal.

Konstantin Gorovikov added a third midway through the final session to give Dynamo some breathing space on its way to an opening game success. 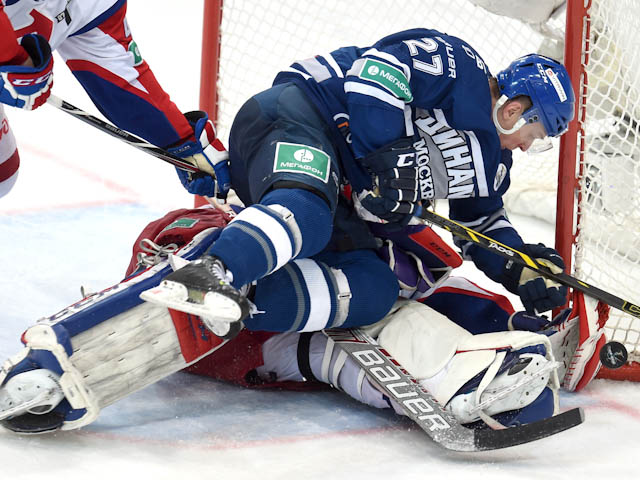 The KHL play-offs came to Finland with a rematch of Jokerit’s opening game in the competition at home to Dinamo Minsk. Back in September the team’s shared eight goals before Dinamo won it in overtime; this time around we saw a similar story as Dinamo clawed back a 0-2 deficit and survived a long 5v3 penalty kill to win it 3-2 in overtime.

Jokerit was left frustrated by its inability to convert the chances it created in overtime, and especially by its failure to punish the Belarusians during 97 seconds with a two-man advantage. Instead the game-winner came at the other end as Matt Ellison scored off a Charles Linglet pass to break home hearts. It was fitting that Linglet was involved in the winner; just seconds earlier he drew a fine reaction save from Henrik Karlsson when he seemed about to add to the goal that took us into overtime.

The game got off to a bright, high-tempo start but neither side was able to fashion much in the way of clear-cut chances early on. Dinamo caused the first gasps of anxiety among a big home crowd when Sergei Drozd pounced on a loose pass on the Jokerit blue line, only to fire wide of the net. Home hopes were lifted in emphatic style just seconds later, though, as Jokerit went to the other end and scored. Lars Haugen was heavily screened by Eetu Poysti as he tangled with a defenseman in the slot and Atte Ohtamaa’s slap shot from the point whistled past the unsighted goalie. Visiting head coach Lubomir Pokovic was unimpressed, berating the officials over what he felt was interference on his netminder, but the goal stood.

The key incidents of the middle session followed a similar pattern: again Drozd went close for Dinamo, and again Jokerit scored seconds later. This time Karlsson made a pad save at his near post and the next attack saw the Finns’ famous LoKoMo line strike once again. Linus Omark swooped towards Haugen’s right-hand post, luring the goalie well out of his crease, before firing the puck into the slot for Petr Koukal to find the empty net. Jokerit then survived a daunting penalty kill against Dinamo’s formidable power play, seeing off back-to-back penalties to go in 2-0 up after 40 minutes.

At that stage it seemed like a long way back for Dinamo, but Karlsson found himself increasingly stretched as the visitor got more opportunities on the power play. The goalie did brilliantly to pluck a deflected Nick Bailen shot out of the air when Alexander Matarukhin thought he’d reduced the deficit but had no answer when Ryan Vesce got a crucial touch on Ellison’s effort on the power play.

The equalizer came with less than 90 seconds left, and once again it was a shot from the point that caused the problems. Topi Jaakola got into difficulties trying to block another Bailen piledriver and after an almighty scramble Linglet tapped into an empty net. 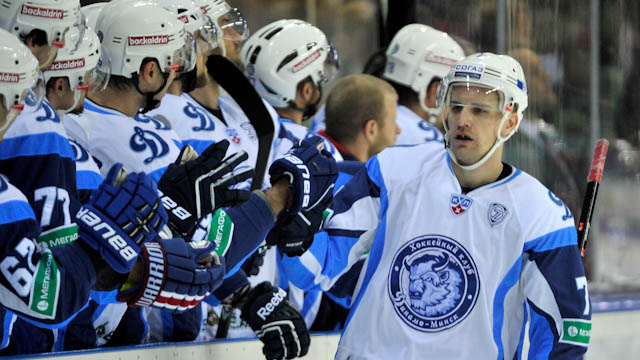