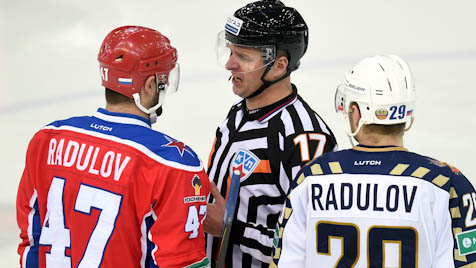 (1) CSKA Moscow vs (8) HC Sochi
Proud history takes on contemporary optimism in the first play-off clash. CSKA, world hockey’s most titled club, added a 33rd national championship to its collection and ended a 26-year spell with no honors. The reward in round one is a clash with HC Sochi, the KHL’s newest team, which entered the league this season to build on the success of the Sochi Olympics.

CSKA’s march to the Russian Championship in regular season was at times spectacular to watch. With a record point total of 139 and a record KHL win (12-0 against Slovan) along the way, the Army Men demonstrated ruthless consistency all season.

Many of the plaudits go to Alexander Radulov, who enjoyed one of those campaigns where almost everything went right. Radulov has always been a game-winner, but this time around he forged a deadly partnership with Stephane da Costa and Igor Grigorenko to create a potent scoring unit. His 71-point haul was slightly down on his best ever tally, but it did come after he missed a quarter of the season through injury and suspension. Tributes also go to head coach Dmitry Kvartalnov who arrived from Sibir in the summer, rebuilt the roster and transformed a collection of talented individuals into a genuine team.

HC Sochi faced a surprisingly similar task, with Vyacheslav Butsayev leaving CSKA to create his own roster from scratch beside the Black Sea. The newcomer ran into doubters early on – prospective GM Pavel Bure quit before a puck was dropped, complaining that the organization lacked the ambition to compete. But Butsayev, in his first full-time head coaching position, carefully developed a line-up that could hold its own in this league. The headline-grabbing name was undoubtedly Ryan Whitney, an Olympic silver medallist with Team USA in Vancouver, while Ilya Krikunov, so long a journeyman, revelled in the responsibility of leading the attack to return career-best figures of 16+25=41.

It’s hard to see Sochi going much further given how impressively CSKA has performed this season, but the newcomer can take some comfort from the fact that two of the KHL’s six regular season champions crashed out at the first play-off hurdle, including Dynamo last time.

Last season:
CSKA – lost to SKA (0-4) in the Conference quarter final
HC Sochi – did not compete

SKA’s on-going quest for a trophy-winning formula saw it bring Vyacheslav Bykov back to the KHL for his first season since lifting the Gagarin Cup with Salavat Yulaev back in 2011. Bykov opted for evolution rather than revolution, recognizing that the roster was chock-full of talent and merely seeking to stiffen up the defense. The capture of Anton Belov on his return from the NHL paid dividends – the former Avangard defenseman proved to be one of the most effective in the league and finished with a +26. However for much of the campaign goaltending was a problem. Five different netminders suited up for SKA and only Mikko Koskinen, a January capture from Sibir, looked consistently convincing.

On offense Artemy Panarin led the way, with the youngster reaffirming his credentials as a potential star for the national team by outscoring Ilya Kovalchuk. Vadim Shipachyov did well in a selfless role as the main supplier of assists while summer signing Evgeny Dadonov returned a creditable 45 points. However, questions remain over SKA’s consistency. A record-breaking 12-game winning run at the start of the season showed what the team can do, but surprise losses to lowly opposition such as Atlant and Slovan highlighted certain fragility in the team that could prove costly at this stage.

Torpedo, back in the Western Conference after a one-year excursion to the East, needed a strong finish to the season to secure its play-off spot. A run of nine wins in the last 11 games makes Peteris Skudra’s men one of the form teams at present and suggests that it could be a lively opponent post-season. But Torpedo has been hard to call this season. At times its form has been impressive: in addition to that late flourish the team also looked promising in the fall. On other occasions, especially around the New Year, it struggled for any kind of fluency in its game. The team’s Finnish connection has led the scoring, with Sakari Salminen (47 points) and Jarkko Immonen (40) sandwiching Wojtek Wolski’s contribution (43) among the forwards; defenseman Juuso Heitanen picked up 27 points from the blue line.

On paper SKA should make it through this without too much of a struggle, but much depends on the frame of mind of both teams. Torpedo can certainly make things tough in a series that could go to Game 6 or 7. 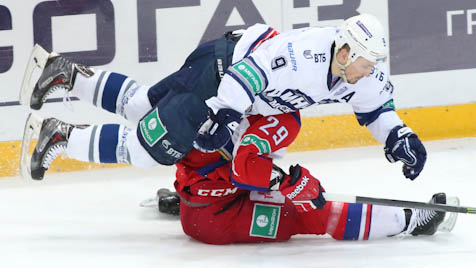 (3) Dynamo Moscow vs (6) Lokomotiv Yaroslavl
It’s a repeat of the clash at the same stage last season, and Dynamo will be out for revenge after a shock 4-3 defeat it suffered 12 months ago.

Back then Dynamo, under Oleg Znarok, was the defending Gagarin Cup winner and had just lifted the Continental Cup. Loko, by contrast, dragged itself into the play-offs with four wins in its final games after Dave King was flown in to try to salvage the season.

Things are different this time around, though. Znarok has gone to Team Russia, leaving his long-term assistant Harijs Vitolins behind the bench in Moscow. The team hasn’t been fundamentally changed by this, with the same emphasis on disciplined, well-drilled play as a unit. As usual, there are few stand-out individuals, with no player scoring 40 points this season. But there may be a question mark between the piping, and it’s the kind of dilemma that coaches tend to enjoy. Alexander Yeryomenko, MVP in both of Dynamo’s Gagarin Cup wins is available to bring all that experience to his team, but he faces competition for his place from Alexander Lazushin, whose 94.6% save ratio is the best in the KHL this season.

At Loko Dave King found himself answering the distress call earlier this season as it became clear that Sean Simpson’s regime wasn’t quite working out as planned beside the Volga. Simpson wasn’t helped by a difficult schedule at the start of the season and with the team once again outside of the play-off spots, King was brought back to continue the job he began last spring. Given time to work out the best combinations on his roster, the incoming coach once again got Lokomotiv on track – 13 wins from 15 games from mid-December to late January powered the team into the play-off places and rendered February’s action largely irrelevant. But a year ago Loko began the post-season as outsiders with nothing to lose; this year the likes of Sergei Plotnikov are established KHL and international players, increasing the pressure from fans in one of Russia’s most passionate hockey cities.

This looks like another close series, just as we saw a year ago. But this time, with Dynamo’s coaching staff free of distracting speculation about the Team Russia job and Lokomotiv offering fewer surprises than before, the Blue-and-Whites should just have the edge. 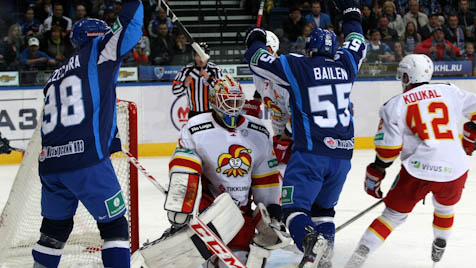 (4) Jokerit Helsinki vs (5) Dinamo Minsk
Jokerit’s debut KHL season always promised much once it became clear that Erkka Westerlund would be behind the bench. His team didn’t disappoint, delivering the traditional virtues of Finnish hockey – resilience, discipline and a stubbornness that always makes this team hard to beat. It’s a tribute to the consistency of Westerlund’s roster that it finished the season among the strongest teams on the road – despite having to adapt to a travel schedule very different from the one it knew in the Liiga. Steve Moses, with his record-breaking 36 goals, grabbed most of the plaudits and his LoKoMo troika with Linus Omark and Petr Koukal poses a real goal threat.

Dinamo began the season in fine form thanks to a devastatingly efficient power play - at one stage the team was converting more than 50% of its numerical advantages. Gradually defenses got wise, but the Bison remained a tough opponent. A run of 13 wins from 14 games over six weeks from the start of December ensured a play-off spot, but the final weeks of the season saw the team in limbo, secure in fifth place but with no prospect of climbing any higher. The team benefited from a summer recruitment drive that saw Charles Linglet, Jonathan Cheechoo and Matt Ellison arrive from Medvescak, and that trio topped the scoring. Defenseman Nick Bailen got 36 points, matching Ryan Gunderson’s tally for Jokerit to tie as the most prolific blue-liner in the conference.

It’s fitting that Jokerit’s first play-off game will be a repeat of its first KHL game. That was a high-scoring, hard-fought overtime win for Dinamo. Both of these teams have some potent offense to call on and the Finns will have to be alert to the qualities of the Minsk power play. But Westerlund’s quietly efficient team will expect to go deep into these play-offs; Dinamo may struggle to prevent them.

Last season:
Jokerit – did not compete
Dinamo – failed to make the play-offs