KHL newcomer HC Sochi came out on top in the three-way tussle for eighth place, calmly downing Lada 3-1 beside the Black Sea to steer clear of rivals Severstal and Atlant. The team from the south only came into being over the summer but successfully rounded off the celebrations to mark the first anniversary of the Olympic Games by marching into the play-offs at the first time of asking.

With so much anticipation around this game it was important for the home team to seize the early initiative, and Max Warn’s ninth-minute goal gave Sochi the lead. More importantly it settled any pre-game nerves, both on and off the ice. Andrei Kostitsyn doubled the advantage early in the second period and when old stager Pyotr Schastlivy made it 3-0 in the 45th minute it was clear that a happy ending was in sight. Martin Zatovic got one back for Lada with a short-handed goal but the night belonged to the home team. Sochi now faces CSKA in the play-off, a daunting task but one that head coach Vyacheslav Butsayev will surely relish as he faces the club where he spent most of his career. 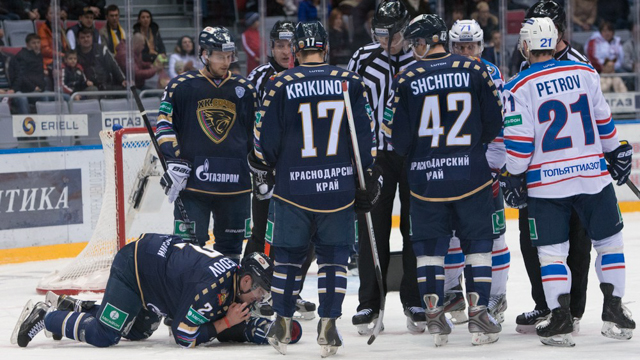 Sochi’s win left no way for its rivals to catch up, but Atlant still finished off with a 7-2 win over Dinamo Riga. The Latvians looked good early on, opening up a 2-0 lead through Miks Indrasis and Gints Meija but it all went astray when Anton Babchuk pulled one back late in the first. An early blitz in the second period saw Igor Levitsky, Artyom Chernov and Andrei Taratukhin put Atlant 4-2 up and the Moscow Region team never looked back. Taratukhin added his second while Vitaly Novopashin and Nikita Soshnikov also found the net in the third as Atlant signed off with a big win but no play-off spot. 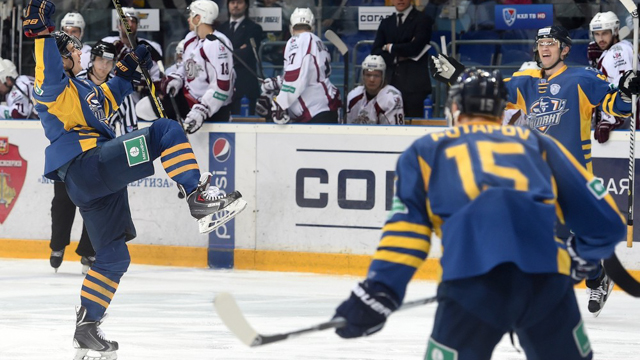 Severstal went into its game at Lokomotiv two points behind Sochi, but an overtime defeat ended its prospects regardless of the other scores. It started out well for the Steelmen when Evgeny Mons made it 1-0 in the first period. But Ilya Gorokhov tied it up in the third and Emil Galimov got the winner in the extras. 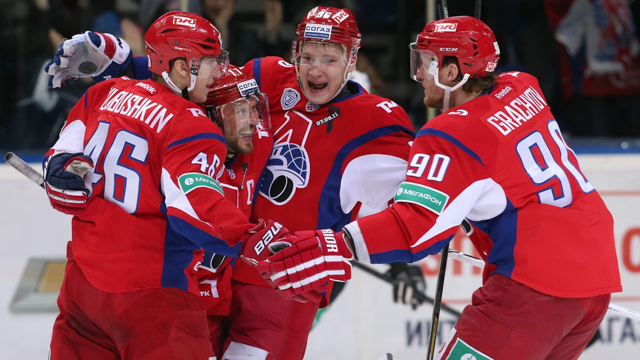 Ak Bars on top in the East
Ak Bars secured top spot in the Eastern Conference thanks to Metallurg Magnitogorsk’s overtime loss at Ugra – and promptly celebrated with a 6-0 win at Neftekhimik.

News of the result from Khanty-Mansiysk was confirmed early in Ak Bars’ game in Nizhnekamsk, but by then Zinetula Bilyaletdinov’s men were well on the way to a victory in the Tatarstan derby. Sergei Kostitsyn and Ilya Nikulin made it 2-0 inside three minutes and Artyom Lukyanov and a second Nikulin marker made it 4-0 by the first intermission.

Things settled down a little after that with Igor Mirnov and Stepan Zakharchuk adding two more goals for the visitor. Anders Nilsson made 28 saves for his shut-out.

Magnitka missed its chance to challenge for top spot after a below-par performance in Khanty-Mansiysk. The home team opened up a 3-1 lead with goals from Pavel Medvedev and Artyom Bulyakov after the first period was tied at 1-1.

Metallurg pulled it back to 3-3 thanks to late goals from Tim Brent and Mikhail Yunkov but Alexander Korolyuk won it for Ugra in the last minute of overtime.

The results see Ak Bars take on Avtomobilist in the first round of the play-offs. Magnitka finishes in third, behind Chernyshev division winner Sibir, and will face Salavat Yulaev.

Dynamo sets up Loko repeat
Dynamo Moscow will take on Lokomotiv in the first round of the play-offs following a 3-1 win at home to Dinamo Minsk. That sets up a repeat of last season’s clash, which ended in a shock victory for Dave King’s team against the regular season champion and defending Gagarin Cup holder.

The clash between Moscow and Minsk was rather lacking in dynamism early on, with the teams managed just 12 shots between the in the first period. Konstantin Volkov finally livened things up midway through the second, completing a slick Dynamo counter by firing a one-timer past Dmitry Milchakov off Alexei Tsvetkov’s pass.

Dinamo Minsk levelled the scores within four minutes thanks to Charles Linglet but the home team went back ahead when defenseman Dmitry Vishnevsky found a clear path to the net and forced puck inside the near post. The Belarusians enjoyed two late power plays but their chances were ended when a faulty line change saw Dynamo get and convert a numerical advantage of its own. Martins Karsums settled the game and secured third place.

Dynamo Moscow’s success meant that Jokerit’s win at Slovan made no difference to the final standings, with the Finns taking fourth place and setting up a play-off meeting with Dinamo Minsk. Jokerit won it anyway thanks to Oscari Kopikari’s overtime goal. The visitor opened up a 2-0 lead when Jere Sallinen scored early on and Ryan Gunderson doubled the lead in the second period. Ladislav Nagy and Matt Murley hauled Slovan level in the third.

Around the league
Regular season champion CSKA finished the first part of its campaign with an overtime win at Vityaz. The Army Men needed an Igor Makarov goal on 60:32 to secure the win in Podolsk after Maxim Mamin cancelled out Damir Zhafyarov’s second-period opener. CSKA will host HC Sochi in its first play-off games on Friday and Saturday. 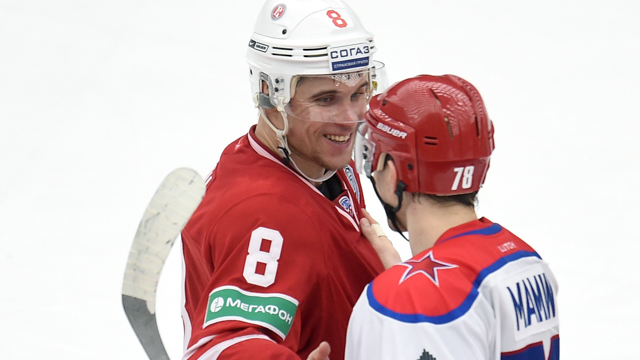 Salavat Yulaev has had a disappointing season by its usual high standards, but the Ufa team goes into its play-off meeting with Metallurg Magnitogorsk on a high after beating Sibir 3-2. Anton Slepyshev got the winner early in the third period after the teams had traded four goals in the middle session. Sibir finished second in the East and starts its play-off campaign at home to Traktor.

Barys warmed up for its post-season meeting with Avangard by beating Torpedo 4-2 in Astana. The visitor recovered a 2-0 deficit for the second game in three days, but this time it could not go on to win. Nik Antropov and Konstantin Pushkaryov gave Barys the win. Torpedo now travels to SKA for its play-off opener.

Avangard slipped up against lowly Metallurg Novokuznetsk, finishing the regular season with an overtime defeat. Metallurg clawed back a two-goal deficit thanks to Alexander Romanov and Alexander Komaristy, with the equalizer coming in the last minute. Dmitry Maltsev got the winner in overtime.

Francis Pare gave Traktor a shoot-out win over Avtomobilist following a 2-2 tie in Chelyabinsk. The result kept these two in seventh and eighth respectively. Traktor now goes to Sibir for its first play-off games, Avtomobilist will travel to Ak Bars.

Admiral ended its season on a winning note with a 6-0 thrashing of Amur to wrap up its campaign. Niclas Bergfors set the sailors on their way but it was a dominant third-period showing that saw four unanswered goals from Andrei Sigaryov, Tom Wandell, Vladislav Ushenin and Oleg Li finish the season with a flourish.