HC Sochi wasted the chance to confirm their play-off spots on Friday evening, with Sochi’s suffering a damaging shoot-out loss to Severstal.

It could have been worse for the league’s newcomer – Severstal led 4-1 at the second intermission and seemed poised to move to within a single point of its opponent. A third-period revival saw Mikhail Anisin, Andre Petterson and Max Warn haul Sochi level, but Dmitry Kagalitsky’s shoot-out winner keeps Severstal in the hunt for eighth place.

Atlant is also a serious contender after moving up to ninth with a 1-0 win at home to SKA. Goalie Atte Engren was the star man as his team was outshot 31-13, but he kept SKA at bay as Igor Levitsky grabbed the game’s only goal. Atlant is now two points adrift of Sochi, but has just one game left to try to overtake its rival. 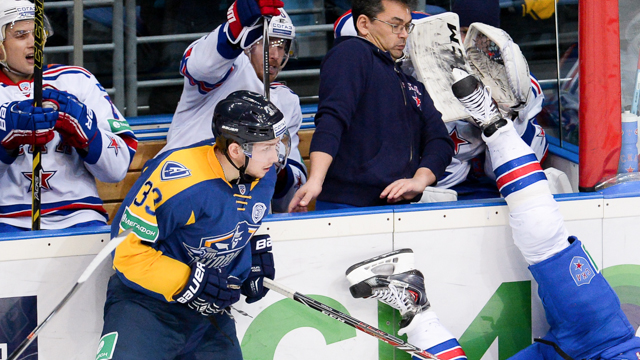 Torpedo went down to a 2-1 defeat at Lokomotiv but is now assured of a play-off spot by virtue of having more regulation time wins than Severstal can achieve. Sergei Konkov and Jonas Holos put Loko in charge in the first period, Alexei Pepelyayev pulled one back for Torpedo. Lokomotiv cannot now finish lower than sixth.

Avtomobilist books play-off place
Avtomobilist secured the eighth and final play-off spot in the Eastern Conference with a 5-4 win at Neftekhimik.

The result puts Avtomobilist six points clear of Admiral with two games to play, but the Yekaterinburg team has an unreachable three-game advantage in regulation-time victories, ensuring it will extend its season.

The visitor made a great start with Aaron Palushaj and Anton Lazarev opening up a 2-0 lead in the first six minutes. But Neftekhimik knew that victory would maintain its own play-off hopes and hit back to tie the game through Igor Polygalov and a Maxim Rybin penalty shot.

It was 3-3 at the end of the first period before Avto moved 5-3 ahead early in the second thanks to goals from Anatoly Golyshev and Alexander Nesterov. Neftekhimik got one back in the 30th minute when Pavel Kulikov scored, but after a helter-skelter opening half-hour produced nine goals, the next 30 minutes did not give a single score as Avtomobilist held on for a vital win.

Eastern Conference title still up for grabs
Top spot in the East is wide-open, with just three points separating the top three teams. Ak Bars currently has the edge, moving to 114 points after a 2-1 shoot-out win at Ugra. But Metallurg Magnitogorsk is one point back thanks to a 4-3 triumph at Lada. Sibir lost ground in a 0-3 reverse at Avangard but could still claim top spot with wins in its remaining two games.

Ak Bars left it late before claiming the win that keeps it out in front. Artyom Bulyansky’s 17th-minute marker gave Ugra the edge and the lead lasted for 40 minutes before Artyom Lukoyanov tied it up late on. Igor Mirnov was the only player to score in the shoot-out, giving Ak Bars the win.

Magnitka, meanwhile, rode out a late surge from Lada to take a narrow verdict. It looked like game over when Denis Platonov made it 4-1 in the 54th minute, adding to two earlier Sergei Mozyakin goals. But Dmitry Vorobyov and Alexander Streltsov scored in the closing stages to make it a nervous finish for the defending champion.

There was less drama in Omsk where Felix Schutz and Alexander Popov gave Avangard an early 2-0 lead. Sibir battled hard and peppered Konstantin Barulin with 40 shots, but the goalie was equal to the task and posted his fifth shut-out of the season. Kirill Lyamin set the seal on Avangard’s win in the third. 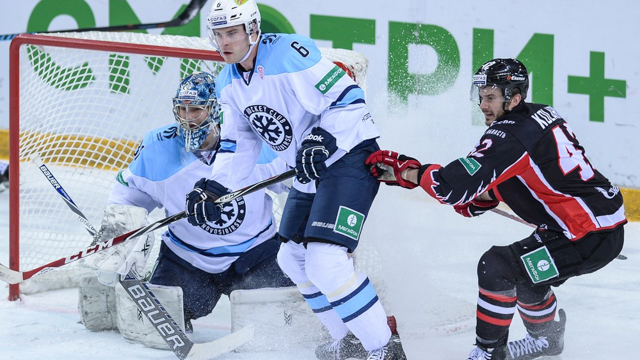 Dynamo edges CSKA in overtime
The sixth meeting of the season between Dynamo Moscow and CSKA went the way of the Blue-and-Whites thanks to an overtime goal from Janne Jalasvaara. He struck with just 30 seconds left to claim his third OT goal of the season and snap a 1-1 tie.

In truth this local derby wasn’t really a classic: CSKA took a first-period lead when Vladimir Zharkov swept home the rebound from a Evgeny Korotkov shot. There was little action of note until the 50th minute when Alexei Tsvetkov took matters into his own hands for Dynamo, blazing his own trail to CSKA’s zone and firing an early shot that beat Ilya Sorokin beneath his pad. Alexander Radulov almost won it for the visitor in regulation, smacking a shot against the inside of the post, but in the end it was Jalasvaara who settled the outcome. 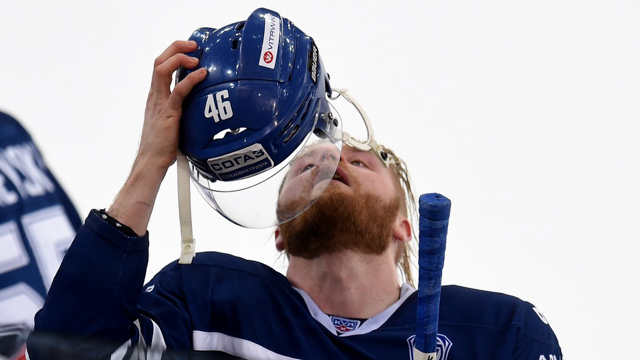 Around the league
Three goals in four minutes midway through the second period saw Dinamo Minsk to a 3-1 win over Jokerit in a game that could be a rehearsal for the first round of the play-offs. Niklas Hagman put the Finns ahead in the first, but Jonathan Cheechoo and two for Charles Linglet turned it around.

Barys eased to a 2-0 victory over Metallurg Novokuznetsk while starting Kuznya goalie Andrei Kareyev lasted just 21 seconds. That was the time it took for Brandon Bochenski to open the scoring and chase the rookie to the bench. Nikita Mikhailis made it 2-0 in the 10th minute and Jan Laco’s 30 saves helped Barys to a routine victory.

Dinamo Riga won 3-1 at Medvescak thanks to first period goals from Kaspars Saulietis, Linus Videll and Milan Jurcina. The trio combined to make it an unhappy debut for locally-developed Medvescak goalie Mate Tomljenovic, who only lasted until the first intermission. Edwin Hedberg pulled one back for the hosts late in the second.