Jokerit forward Steve Moses set a new KHL goalscoring record as he recorded his 36th marker of the season.

The big moment came in the first period at Atlant when the American converted a penalty shot to give his team a ninth minute lead.

Jokerit went on to build a 4-0 lead. Petteri Virtanen made it 2-0 late in the second before Ryan Gunderson and Tommi Huhtala stretched that advantage early in the third.

Atlant knew that only victory would do to keep its play-off hopes alive and rallied late on to score twice through Alexander Taratukhin, but the outcome was already decided. The Moscow Region team can still theoretically catch HC Sochi, but trails by four points with just two games left to play. 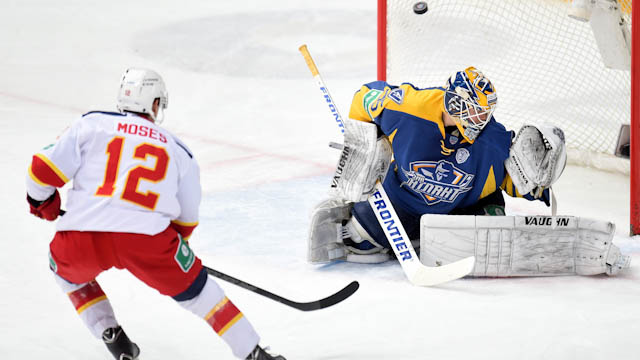 Torpedo fightback stuns Sochi
This battle between two teams looking to secure their play-off spots was all about HC Sochi’s Ilya Krikunov.

The forward scored twice in the second period to help his team to a 3-0 lead over Torpedo and it seemed that the KHL newcomer would be all but assured of a play-off spot come the final hooter.

But then Krikunov picked up a major penalty for boarding late in the second and on the subsequent power play Vadim Krasnoslobodtsev reduced the deficit early in the third. Krikunov was also ejected from the game for his hit on Alexei Pepelyayev, blunting the home offense and changing the momentum of the game.

Torpedo took advantage, scoring three goals late on to turn the result upside down and snatch a 4-3 victory. Jusso Heitanen and Wojtek Wolski tied it up before Vladimir Galuzin got the winner with 95 seconds left.

Torpedo moves to 87 points, eight better off than Severstal, the only team that could still theoretically catch it. Sochi remains on 83, four clear of Severstal and Atlant.

So easy for SKA
SKA powered to a crushing 7-1 win at Dinamo Minsk with Ilya Kovalchuk and Vadim Shipachyov leading the charge. Kovi opened the scoring on four minutes and it was 2-0 just three minutes later thanks to Shipachyov.

Both players finished with 2+1 for the night, with Shipachyov’s line mate Evgeny Ketov returning 1+2 as Dinamo suffered an evening to forget.

SKA’s clinical finishing was particularly impressive. Overall it scored seven from 29 shots on goal and in the third period it converted four of seven attempts to enjoy a confidence-boosting romp ahead of the play-offs.

Prokhorkin back on form
Nikolai Prokhorkin, back at CSKA after a spell playing VHL hockey in Voronezh, produced a game-winning display to down Lokomotiv.

The young forward scored in regulation, putting CSKA 2-1 up in the second period, only to see the home team battle back to tie the scores thanks to Ilya Lyubushkin.

But Prokhorkin was not to be denied, settling the shoot-out to give the regular season champion yet another win. 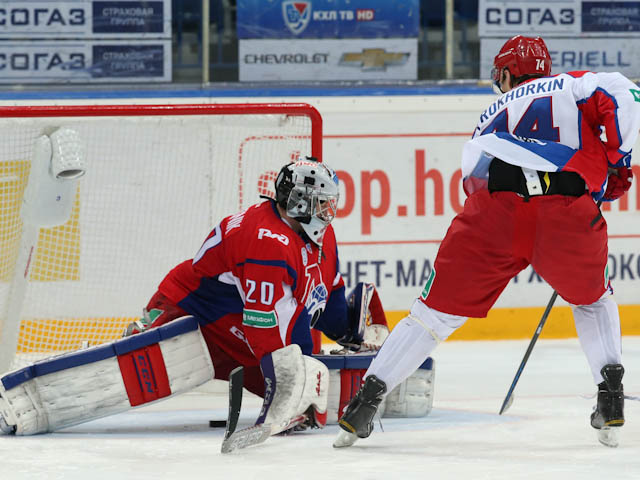 Avtomobilist is just one win away from confirming a play-off spot after a 3-1 victory at Lada. Early goals from Alexander Nesterov and Alexander Rybakov put the visitor in charge; Alexei Simakov added a third after Georgy Belousov got one back for Lada.

Severstal kept its faint play-off hopes alive with a 3-1 win at a below-strength Dynamo Moscow. Sergei Monakhov gave the visitor the lead before Yegor Dugin tied it up, but Nikolai Kazakovtsev and former Dynamo man Marek Kvapil secured a win that moves Severstal to within four points of eighth place. 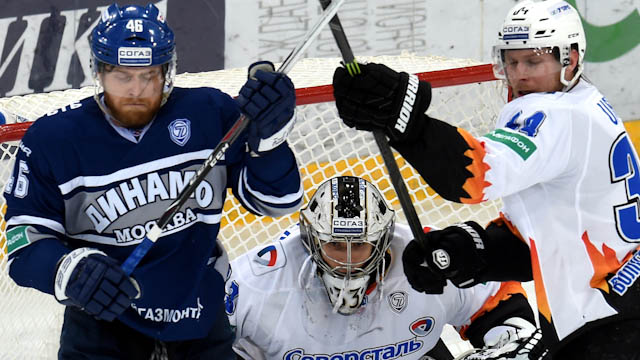 Stanislav Chistov’s shoot-out strike handed Traktor victory after a 1-1 tie with Ak Bars. The scoring all came in the final session with Deron Quint putting the home team up before Alexander Svitov leveled the scores.

There was defeat for another Eastern Conference heavyweight as Metallurg Magnitogorsk went down 4-2 at Neftekhimik. Two goals from Maxim Rybin made the difference here; Danis Zaripov and Jan Kovar scored for Magnitka.

A last-minute goal from Charles Genoway gave Dinamo Riga a 4-3 win at Slovan. The Latvians never trailed in the game but looked set to go to overtime when Andrej Stastny tied it up midway through the third session. Genoway struck with 49 seconds remaining to seal the win.