They came to salute the new regular season champion. They came to see CSKA celebrate landing its first domestic trophy since the end of the Soviet Union. But they left with a stark reminder that, come the play-offs, there’s more than one contender from Moscow.

CSKA powered to the Continental Cup thanks to Friday night’s win over Medvescak and that success, combined with the potent lure of a local derby against Dynamo, ensured a full house for Sunday’s game.

And the big crowd was treated to a hard-fought game settled by some clinical Dynamo finishing and crowned with a third-period fight that saw young Nikita Kvartalnov in the thick of brawling as he earned 17 minutes in penalties.

Dynamo took the lead midway through the second period with a well-worked goal. Alexei Tsvetkov collected the puck behind the net, picked out Denis Mosalyov out in front and the forward’s instinctive pass gave Martins Karsums a clear sight of the open corner of Ilya Sorokin’s net. Dynamo might have gone ahead even earlier when Maxim Karpov was awarded a penalty shot just before the interval, but his attempt was saved by Stanislav Galimov in what proved to be the starting goalie’s last major contribution before he made way for Sorokin early in the second.

The second goal came early in the third with Kaspars Daugavins beating Sorokin from close range. The goalie had reacted well to block Alexander Osipov’s shot but Daugavins was too sharp on the slot and forced home the rebound with some deft close control.

Then came the showdown: Kvartalnov was knocked flying by a hard check from Mat Robinson but recovered quickly enough to take out his frustrations on Alexei Sopin. At the same time Andrei Stas and Yegor Dugin dropped the gloves. A further flare-up followed in the 55th minute with Osipov and Evgeny Artyukhin doing battle alongside Maxim Mamin and Maxim Karpov.

In between the two fights Dynamo goalie Alexander Yeryomenko made the finest of his 32 saves to deny Simon Hjalmarsson as his team sent out a warning to its rivals ahead of the play-offs. 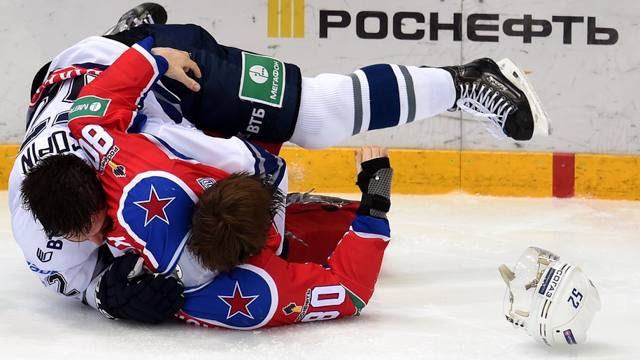 SKA shoots down Jokerit
The other big game in the Western Conference saw SKA beat Jokerit in a shoot-out and go a long way towards confirming second place in the table.

The teams tied 1-1 in regulation, with SKA opening the scoring through Roman Rukavishnikov’s first goal for the club. He took advantage of traffic in front of Henrik Karlsson’s net to fire in from distance.

Jokerit leveled in the second with a well-worked move converted by Ville Lajunen and there was no further scoring. In the shoot-out Ilya Kovalchuk and Pyotr Khokhryakov both scored for the home team; the visitor failed to hit the target with either of its attempts. 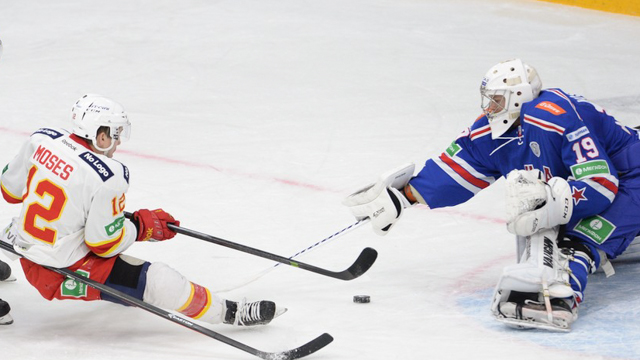 Torpedo, Sochi closing on the play-offs
Torpedo and HC Sochi both won to move closer to securing play-off spots in the West. Torpedo is now in seventh thanks to a 3-1 home win over Medvescak, while Sochi is one point behind after an overtime win at Lokomotiv.

The visit of Medvescak, a team that has already reached the end of its meaningful contribution to this season, was ideal for a Torpedo side still anxious to confirm its post-season campaign. Jarkko Immonen scored in the eighth minute to settle any nerves and Valery Vasiliev made it 2-0 early in the second.

James Wright got one back for the Croatians but Vadim Krasnoslobodtsev settled the outcome with a power play goal early in the third.

Sochi enjoyed an element of good fortune with its game-winner in Yaroslavl: midway through the extras Igor Ignatushkin fired the puck into the slot from behind the goal-line and saw a lucky ricochet off Staffan Kronwall deflect the disc into the goal.

That snapped a 1-1 tie. Igor Radulov opened the scoring in the third minute before Jonas Holos put Loko level in the second period.

Sochi is now four points ahead of ninth-placed Atlant and has two games in hand on its rival.

Around the league
Eastern Conference leader Ak Bars suffered a derby defeat against Tatar neighbor Neftekhimik. Pavel Zdunov scored twice early on to give the visitor a 2-0 lead and Ak Bars struggled to find an answer. Igor Mirnov pulled one back on the power play late on but Neftekhimik held out for a 2-1 win.

Metallurg Magnitogorsk attempted another dramatic late fightback, but this time ended up going down 4-3 in overtime at home to Lada. When Jan Kovar tied the scores at 3-3 in the 59th minute with his second of the nigth it immediately prompted memories of the previous game when two last-minute goals earned a 4-3 win over Avtomobilist. This time, though, the game went into extras and Dmitry Vorobyov won it for the visitor with just seven seconds left.

Traktor climbed to fifth in the Eastern Conference with a 4-2 win at home to Ugra. Two goals from Martin Ruzicka led the way, while Philip Larsen scored both for the visitor.

Nigel Dawes and Brandon Bochenski scored in the last ten minutes to lift Barys to a 5-3 win at Amur. Bochenski was also on target in the second period, cancelling out an Alexander Ryazantsev goal.

Admiral moved to within a point of the top eight thanks to a 3-1 win at home to Avangard. Goals from Artyom Zemchyonok and Richard Gynge either side of the first intermission put the home team in control. Alexander Popov got one back for Avangard but Ivan Glazkov completed the scoring.

It hasn’t been the easiest of seasons for Metallurg Novokuznetsk but the team completed its home campaign with an impressive 5-2 win over Salavat Yulaev. Kirill Kaprizov, Ryan Stoa and Ansel Galimov set the host on the way with three unanswered first-period goals before Alexander Komaristy wrapped it up with two goals, including a penalty shot. Alexei Glukhov and Kirill Koltsov got the consolation goals.

Severstal’s play-off hopes are more theoretical than real but a 4-2 win over bottom club Slovan at least keeps the Cherepovets team on the fringes of the hunt. Pavel Chernov got the game-winner here in the third period as his team climbs to 10th place.