Atlant moved to within two points of a play-off spot thanks to a 3-2 verdict over Dinamo Minsk.

The Moscow Region team’s bid to extend its season is not yet over and tonight’s success in Belarus means HC Sochi and Torpedo continue to look nervously over their shoulders.

Atlant took an early lead through Evgeny Bodrov and the score remained 1-0 for more than half an hour. The teams then traded goals late in the second; Alexander Materukhin briefly tying the scores before Igor Levitsky made it 2-1 to Atlant.

Anton Babchuk gave Atlant a two-goal cushion early in the third and the visitor held on for the win despite Matt Ellison pulling one back for Dinamo. 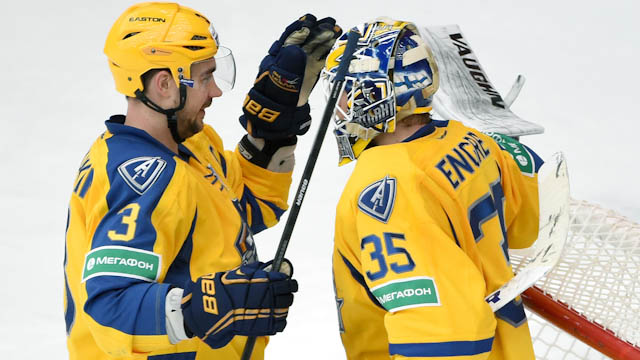 Salavat snaps losing streak
Salavat Yulaev bounced back up to fifth place in the Eastern Conference thanks to a 3-1 win at Admiral.

Teemu Hartikainen opened the scoring midway through the first period and Dmitry Makarov doubled the lead in the second as the Ufa team shrugged off a four-game losing streak.

Tom Vandell pulled a goal back for the home team early in the third to give it hope of clawing back a much-needed win in its own play-off push, but Stanislav Golovanov snuffed out Admiral’s resistance in the closing minutes.

The teams meet again tomorrow with Admiral desperate to cut the seven-point gap between it and eighth-placed Avtomobilist.