Another record? No problem for The Army Men! February 11 round-up

CSKA produced a crushing display to claim the biggest win in the KHL’s history with a 12-0 thrashing of Slovan.

The Army Men’s victory was bigger than Ak Bars’ notorious 11-1 hammering of Avangard back in 2009, even if it still fell some way short of the club’s biggest ever win – a 23-0 blow-out against Spartak Kaunas of Lithuania in the Soviet Championship of 1952-3.

The first period set the tone. CSKA fired in six goals, and gave up just two shots on Stanislav Galimov’s net over the course of 20 minutes of pure hockey dominance. It was 3-0 inside six minutes as Alexander Radulov and Igor Grigorenko got the first of their hat-tricks before Vladimir Zharkov chased starting goalie Denis Godla to the bench.

His replacement, Johan Backlund, stayed in place until the final hooter – and limited CSKA to just two goals in the second period – but ultimately could do little to stop the home team’s procession.

Radulov topped the scoring charts with 3+2, Grigorenko was close behind on 3+1, Stephane da Costa had 1+3 and there were also goals for Maxim Mamin (2), Nikita Kvartalnov and finally Simon Hjalmarsson. Young goalie Ilya Sorokin, a recent arrival from Metallurg Novokuznetsk, played out the second half of the game for CSKA. 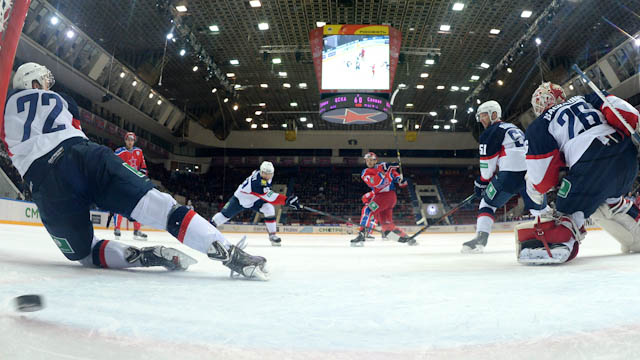 Torpedo wins play-off six-pointer
Vadim Krasnoslobodtsev isn’t a name that trips readily off the tongue, but the Kazakh international is the toast of Nizhny Novgorod tonight after leading Torpedo to a vital win over play-off rival HC Sochi.

Torpedo took the verdict in a shoot-out after a 1-1 tie, and Krasnoslobodtsev potted the winner to add to his 50th-minute marker. That strike cancelled out Andrei Kostitsyn’s opener from the start of the second period.

The outcome locks the two teams together on 78 points, four clear of ninth-placed Vityaz and both with two games in hand. 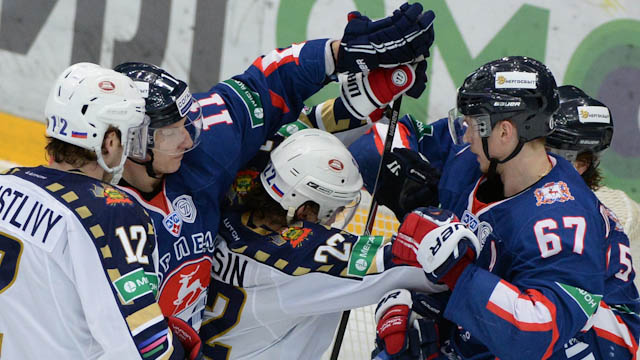 Magnitka leaves it late
Two goals in the last 25 seconds snatched victory from the jaws of defeat for Metallurg Magnitogorsk – and left Neftekhimik wondering how it finished with no reward.

The visitor took the lead after 1:42 through Matt Anderson, and did not find itself trailing until Jan Kovar hit a stunning winner with just nine seconds left on the clock.

Kovar’s game-winner arrived just 14 seconds after he created an equalizer for Tim Brent as the defending champion gambled everything on a late storm and reaped the rewards with a power play goal in a 6-on-4 format.

The Czech forward had a hand in his team’s other two goals on the night, claiming assists as first Viktor Antipin then Sergei Mozyakin pegged Neftekhimik back earlier on.

Shirokov back in the groove
Sergei Shirokov’s return to action for Avangard has come at just the right time for the Omsk team. After injuries kept him out of action for most of this year the prolific forward is back on the goal trail – and led his colleagues to a morale-boosting win at Sibir.

Shirokov scored his team’s goal in a 1-1 tie in regulation and went on to get the decider in the shoot-out. In between times Andrei Kopeikin tied it up for the host.

The result will probably make little difference to the final standings in the Chernyshev division, with Sibir still out in front, but it serves as a reminder that a full-strength Avangard can be a dangerous play-off opponent.

Dynamo Moscow eased to a 6-3 win at Vityaz, putting a further dent in its opponent’s play-off prospects. Vityaz knew that victory would close the gap on the loser of the Torpedo-Sochi game and took an early lead through Anton Korolyov, but Dynamo quickly turned it around thanks to Nikolai Zherdev and Alexander Budkin. Konstantin Glazachev added two more as the Muscovites took control in the second. 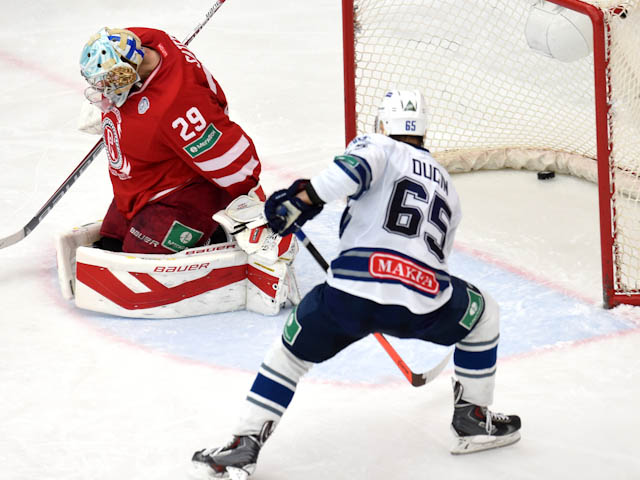 SKA tested the patience of its home crowd once again before edging Dinamo Riga late on. Lauris Darzins gave the Latvians a first-period lead before Gints Meija missed a penalty shot late in the second. Tony Martensson finally found a way through in the 45th minute to tie it up for SKA. Roman Cervenka made it 2-1 five minutes later and a power play goal from Jimmie Eriksson sealed the win.

Lokomotiv ended a four-game losing streak by beating Amur in overtime. Jonas Holos got the game-winner after a 1-1 tie. Earlier Andrei Loktionov put Loko up just after the midway point but Evgeny Orlov tied it up in the third.

Stanislav Chistov struck with just 40 seconds left in overtime to give Traktor the verdict at Ugra. Earlier the teams traded second-period goals; Vyacheslav Osnovin putting Traktor up before Nikita Gusev tied it at 1-1.

Cade Fairchild gave Metallurg Novokuznetsk a shoot-out win following a 2-2 tie with Barys. The Kazakhs led twice thanks to goals from Oleg Kvasha and Roman Starchenko, but Kuznya twice levelled the scores through Alexander Komaristy and Sergei Dorofeyev.

There was a shoot-out in Cherepovets as well, where Dmitry Kagarlitsky gave Severstal the edge over Medvescak following a 3-3 tie.