Torpedo strengthened its grip on a play-off spot – but Peteris Skudra’s team had to work hard for a narrow win over struggling Metallurg Novokuznetsk.

Denis Kazionov gave Torpedo the perfect start, opening the scoring after just 54 seconds, but Metallurg was not about to roll over. Dmitry Maltsev tied it up in the third minute and it was clear that even though the visitor no longer had even a theoretical hope of reaching the play-offs it was still determined to fight for every point.

The home side had the edge in the first period, seeing a goal ruled out by the video official before Nikita Dvurechensky made it 2-1 with a penalty shot. But the second session was tighter as Metallurg outshot Torpedo. The teams traded goals through Alexei Potapov and Ryan Stoa to make it 3-2 going into a tense – but ultimately scoreless – final period.

The win lifts Torpedo to 76 points, five points ahead of the chasing pack and just one behind seventh-placed HC Sochi. 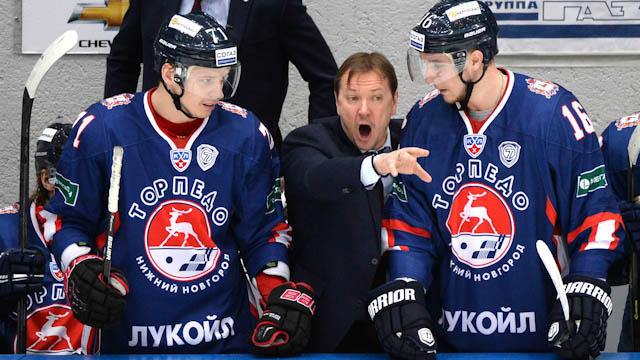 Torpedo’s prospects were helped further by Sibir’s 3-0 win at Severstal, a result that leaves the Steelmen five points adrift alongside Dinamo Riga and Vityaz on 71 points.

Goalie Nikita Bespalov was the star man, making 45 saves as he bounced back from giving up seven goals at Sochi last time out. Goals from Sergei Shumakov, Jarno Koskiranta and Artyom Voroshilo gave the Siberians victory.