Avangard picked up its first win in six to bring an 11-game run of home fixtures to a winning conclusion.

The game was also a personal triumph for Sergei Shirokov as the forward scored twice to get his first goals since December 6. Since then Shirokov, who began the season as one of the league’s leading scorers, has featured in just seven games due to injury problems but today his contribution was decisive.

The early exchanges saw Sergei Kalinin and Ryan Gunderson swap power play goals in the first period before Shirokov and Maxim Goncharov led Avangard to a 3-1 advantage at the second intermission.

But Jokerit refused to roll over: Steve Moses hit two in the final stanza only to taste defeat thanks to Shirokov’s second of the night. 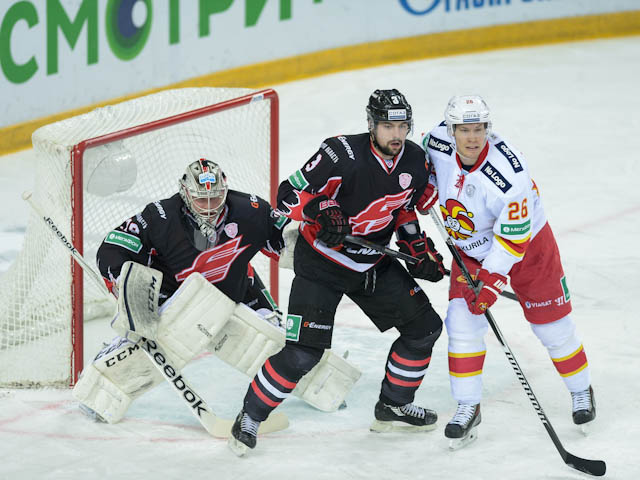 Torpedo into the top 8
Third period goals from Torpedo’s Finnish contingent lifted the Nizhny Novgorod team to a 2-1 victory over Barys and put it back on track for the play-offs.

Sakari Salminen, Torpedo’s leading scorer this season, got the game winner in the 54th minute, collecting the puck behind the net and storming to the slot to squeeze it through Jan Laco’s five-hole.

Torpedo now has a two-point advantage over Dinamo Riga and Severstal in the chasing pack, and has games in hand on both of its closest rivals.

Goals from Evgeny Mons, Anatoly Nikontsev and Sergei Monakhov helped Severstal to a 3-0 win at home to lowly Metallurg Novokuznetsk. The win, backstopped by 18 saves from Jakub Stepanek, lifts the Steelmen to 71 points, two adrift of eighth-placed Torpedo in the race for the play-offs.

HC Sochi moved closer to booking its debut play-off campaign with a thumping 7-3 win over Sibir. The early stages gave little clue of what was to come: the first period was goalless and at the start of the second Renat Mamashev quickly cancelled out Ilya Krikunov’s opener for the host. But then it turned into a procession as Krikunov got his second and Mikhail Anisin claimed assists on goals for Max Warn and Pyotr Schastlivy. The lead stretched to 7-1 in the third, before the Siberians pulled a couple back late on.