A 3-1 win at Dinamo Riga put Avtomobilist clear of the chasing pack in the race for eighth place in the East.

But the defeat for the home team puts the Latvians’ post-season prospects in jeopardy as Dinamo leads Torpedo by a single point in the Western Conference having played three games more.

Avto edged the first period 2-1, with Artyom Gareyev opening the scoring in the 10th minute before Mikelis Redlihs tied it up with a penalty shot. Sergei Gusev scored on the power play just before the first intermission to reinstate the visitor’s lead.

After a goalless middle session Alexander Rybakov stretched Avto’s lead early in the third and Dinamo was unable to find a way back. 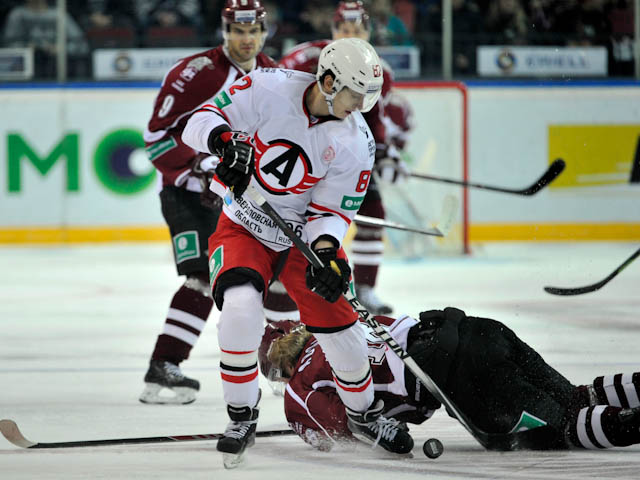 Avtomobilist’s success was all the sweeter thanks to Admiral’s defeat at Neftekhimik, a result that leaves the Vladivostok team five points adrift in ninth.

Neftekhimik dominated the first period, outshooting its opponent 22-8, but had to wait until the 32nd minute before Igor Polygalov opened the scoring. The goal action really picked up in the third, though, after Vladislav Ushenin tied it up in the 45th.

Parity did not last for long. Dan Sexton reinstated the home team’s lead and with Ushenin in the sin bin Evgeny Grigorenko made it 3-1 in the 50th minute. Konstantin Makarov pulled one back, but it wasn’t enough for Admiral.

Ugra beat Lada in a shoot-out following a 1-1 tie in Khanty-Mansiysk. Nikolai Lemtygov got the decisive score. Earlier Ivan Yatsenko put the home team 1-0 up only for Fedor Fedorov to equalize in the second period.