Alexander Radulov was back on the ice for CSKA for the first time since January 13 and celebrated his return to action with the game-winning goal in a 2-1 victory over Salavat Yulaev.

The decisive moment came in the 31st minute with CSKA on the power play. Radulov exchanged passes with Stephane da Costa before firing in a one-timer from the right-hand face-off spot as Igor Grigorenko screened Leland Irving. That proved to be enough for Radulov to secure a victory against his former club.

Earlier in the second period the teams had traded goals during an eventful Salavat Yulaev power play. With CSKA’s Evgeny Korotkov in the sin-bin, the Army Men snatched a short-handed goal through Jan Mursak. But the lead was short-lived as Ivan Vishnevsky converted the power play to tie it up on 27:26. 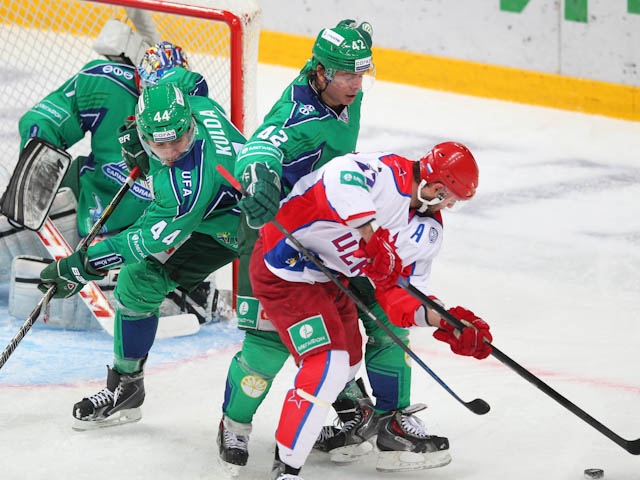 Avangard slumps, optimism for Severstal
For much of this campaign Avangard has been playing successful hockey while Severstal has been struggling to keep in touch with the play-off places. But today’s game in Omsk showed that the final stages of the regular season are turning the formbook on its head.

Avangard lost out in overtime to suffer its fourth defeat in a row – not a problem in terms of reaching the play-offs, but enough to raise questions about the team’s readiness to contest the post-season.

Severstal’s win, secured by Dmitry Kagarlitsky in overtime, puts it three points outside the play-off spots in a tight race that also features Dinamo Riga, Torpedo and Vityaz. The Cherepovets team has taken at least one point from each of its last five games.

The visitor might feel it should be a point better off: Severstal opened up a 2-0 lead at Avangard through Anatoly Nikontsev and Pavel Chernov, only to be pegged back in the third period by goals from Alexander Popov and Evgeny Kulik.

SKA bounces back, other leaders stay in form
After defeat against Atlant last time out there were reports of a frank discussion between SKA’s directors and the coaching staff. Whatever was said seems to have got the message across on the evidence of Sunday’s win over Medvescak.

The visitor came to St. Petersburg on the back of a three-game winning streak that rekindled play-off hopes, but left on the wrong end of a 5-2 scoreline.

Three first period goals put the home team in charge, with Evgeny Dadonov, Jimmie Eriksson and Maxim Chudinov all hitting the target. But Medvescak caused some anxious moments for the host, battling back to 2-3 before Dadonov got his second and Artemy Panarin completed the scoring.

There were wins for the other teams at the top of their conferences. Dynamo Moscow conceded a goal for the first time after three shut-outs but still edged Vityaz 3-2. Denis Kokarev’s third-period game-winner put a big dent in the visitor’s play-off push. 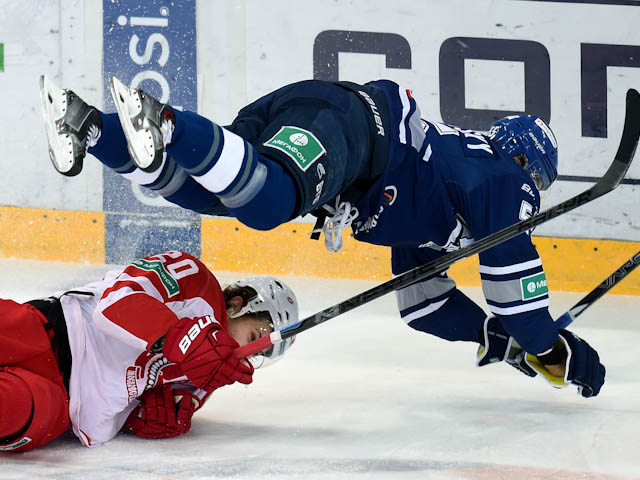 Eastern Conference leader Ak Bars had a narrow win over Dinamo Minsk, seeing off the Belarusians 2-1 thanks to Justin Azevedo and Dmitry Obukhov early in the game. Matt Ellison pulled one back but Anders Nilsson came up with 16 saves in the third to protect the lead. 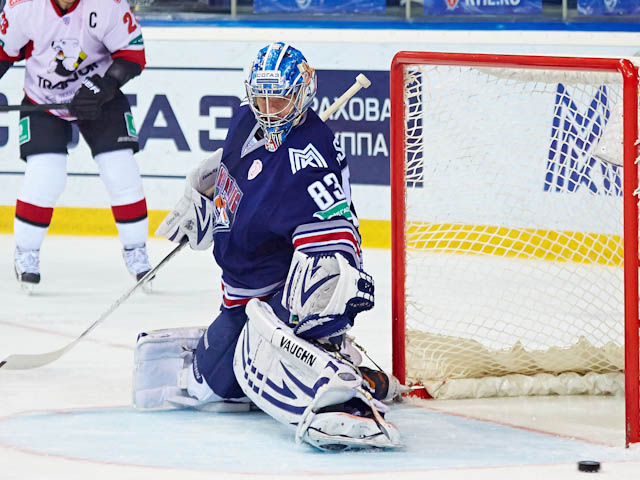 Jokerit defeated Atlant by the same scoreline thanks to third-period markers from Jere Sallinen and Petr Koukal, with Henrik Karlsson making 22 stops.

Sochi and Riga eying the play-offs
HC Sochi is closing in on a play-off spot in its debut season and opened up a four-point gap over the chasing pack with a 4-1 win at home to Lokomotiv. Meanwhile Dinamo Riga’s 6-0 thrashing of Slovan puts the Latvians in the top eight, just ahead of Torpedo.

In Sochi the visitor was the first to show, thanks to a Geoff Platt goal in the sixth minute. But after the intermission it all changed: Mikhail Anisin tied it up and Roman Lyuduchin put the hosts up before Ilya Krikunov and Alexei Krutov completed the scoring in the third.

Dinamo wasted little time in taking control of its game with Slovan. Roberts Bukarts opened the scoring after just 24 seconds and Kaspars Saulietis doubled the lead in the 10th, spelling the end of goalie Johan Backlund’s contribution to the game.

Jakub Kovar made 28 saves to help Avtomobilist to a 2-0 win at home to Ugra. The scoring came from Alexander Nesterov (1+1) and Dmitry Megalinsky as Avto remains in the play-off places. Ugra continues to struggle despite the dismissal of head coach Dmitry Yushkevich on Saturday.

Admiral remains close behind Avtomobilist in ninth place thanks to a 2-1 win over high-flying Sibir. All the goals came in the middle session with Tom Wandell and Konstantin Sokolov putting Admiral up before Stepan Sannikov reduced the arrears. Admiral is one point adrift of Avto but has played one game less.

Metallurg Novokuznetsk avenged its recent defeat to Amur with a 3-0 victory in Khabarovsk. Dmitry Maltsev, Mikhail Plotnikov and Alexander Komaristy got the goals; Rafael Khakimov made 28 saves. Defeat ends Amur’s theoretical chance of making the play-offs.

Lada thrashed Neftekhimik 6-2 with two goals from Georgy Belousov leading the way. The game was decided in the second period when Lada scored five unanswered goals, having trailed 1-0 to Evgeny Grigorenko’s first-minute marker at the first intermission.