There’s no sign of CSKA letting up and coasting through the final weeks of the regular season. The Army Men overwhelmed Barys 5-1 in Astana to further stretch the lead at the top of the KHL table.

It didn’t take long for CSKA to seize the initiative: after 10 minutes of sparring Maxim Mamin put the visitor up and Sergei Andronov made it 2 - in the 15th minute. Second-period goals from Stephane da Costa – who also picked up two assists on the nigh – Nikita Zaitsev and Roman Lyubimov put the issue beyond doubt.

Mike Landin pulled one back early in the third period, but it was a token effort in a game long since decided. 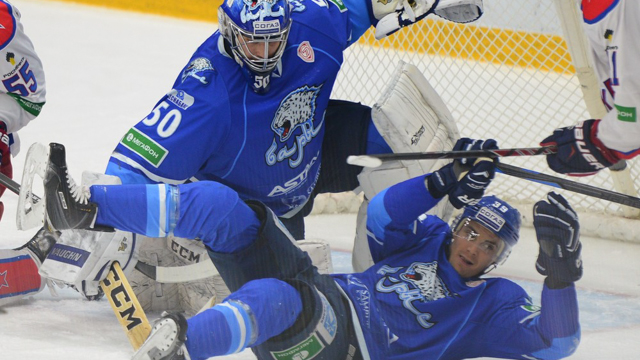 CSKA’s push for the regular season title was further enhanced by SKA’s surprise 3-1 loss at home to Atlant. Artemy Panarin gave SKA a second-minute lead but it all went downhill after that. Nikita Soshnikov tied it up in the ninth minute and further scores from Vyacheslav Leshchenko and Albert Yarullin completed a win that keeps Atlant’s play-off hopes alive.

Torpedo revival continues
Resurgent Torpedo made it two wins from two with a 3-2 success at Avangard and climbed back into the play-off places.

The home team took the lead through Vladimir Sobotka in the first period, but that was cancelled out by Gennady Stolyarov’s power play marker midway through the second.

With the game in the balance until deep into the third, it took two goals in just over a minute to swing the outcome. Nikita Filatov put Torpedo 2-1 up and Alexei Potapov stretched that lead in the 59th minute.

There was still time for Avangard to reduce the arrears with a late storm: Alexander Perezhogin made it 2-3 with 47 seconds left to play, but that was as close as the host got.

Advantage Sochi in play-off battle
The race for the top eight in the Western Conference is a wide-open affair – but HC Sochi dealt a big blow to rival Vityaz with a 5-2 win in the Bolshoi Dome.

Both teams knew that victory tonight would put them into a play-off position and for the first two periods there was little to separate them. Maxim Afinogenov twice put Vityaz up; Sochi replied through Evgeny Lapenkov and Roman Lyuduchin.

The teams were locked at 2-2 for more than 25 minutes before Sochi finally pulled away. Andrei Kostitsyn broke the deadlock in the 50th minute and Corey Emerton quickly extended the advantage. Pyotr Schastlivy completed the scoring late on.

In the other game affecting the play-off race Dinamo Riga suffered a 2-1 defeat at home to Medvescak, pushing the Latvians out of the top eight and keeping Croatian hopes very much alive. Patrick Bjorkstrand put Medvescak ahead early in the second period and after Miks Indrasis tied it up Bill Thomas got the winner for the away team.

Once again he was helped by a solid team performance in front of him, limiting Loko to 19 shots – and just three in the final session as the home team protected its slender lead.

The winning goal came from Maxim Karpov, who marked his 100th game for Dynamo by forcing home a Mat Robinson pass. 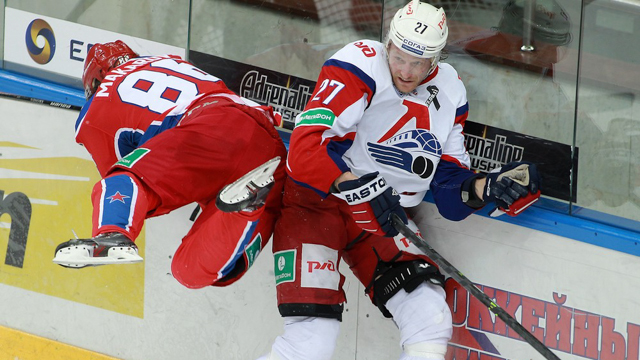 Around the league
Jokerit set an attendance record for Finnish hockey and celebrated in style with a 4-0 thrashing of Slovan. Another big crowd at the Hartwall Arena took the season’s tally to 304,305 spectators, a new national record. The 12,472 who came along saw two goals from Jere Sallinen and further markers from Petri Virtanen and Steve Moses while Henrik Karlsson made 20 saves.

Metallurg Magnitogorsk completed a century of points with a 5-3 win at home to Ugra – but the defending champion left it late. Igor Magogin put Ugra 3-2 up in the 55th minute, finally forcing Magnitka to up its game. Danis Zaripov tied it up two minutes later and Tim Brent made it 4-3 with three minutes left. Tim Stapleton completed the scoring. 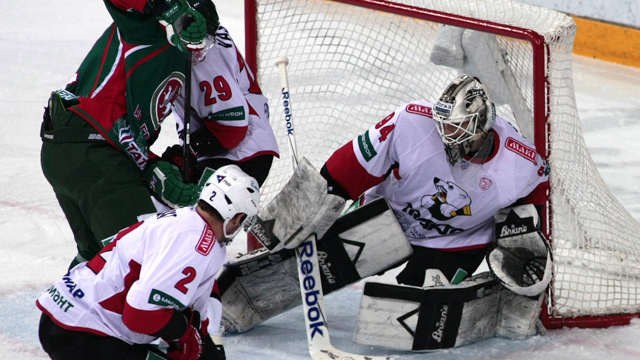 Avtomobilist downed Dinamo Minsk in a shoot-out after a 3-3 tie in Yekaterinburg. Aaron Palushaj settled it to frustrate a Dinamo team that led twice in regulation thanks to goals from Jonathan Cheechoo and Alexander Kulakov.