A 4-1 win over Amur saw Sibir move five points clear of Avangard in the battle at the top of the Chernyshev Division.

It took some time for Sibir to finally force its way through Amur’s defenses, and when the opening goal came in the 32nd minute it was a cruel blow for the visitor. Having protected the goal with such determination, Amur was undone by a short-handed effort after goalie Alexander Pechursky dithered too long behind the net and was caught out by Artyom Voroshilo who went on to claim his first goal of the season.

Amur tied it up quickly thanks to Vyacheslav Litovchenko but parity was maintained for barely 90 seconds before Alexei Kopeikin gave Sibir a lead that this time it would not let slip. Jarno Koskiranto and Igor Ozhiganov completed the scoring to strengthen Sibir’s grip on second place in the East. 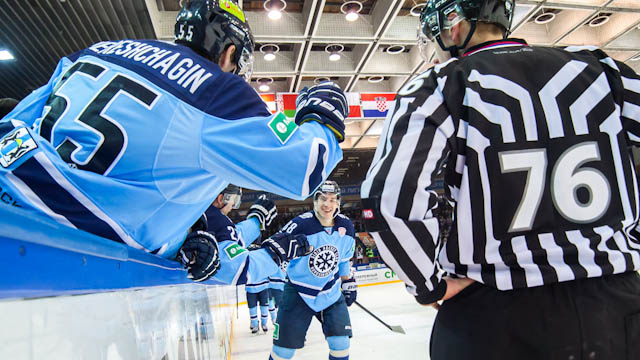 Admiral sneaks into eighth
Admiral inched into the play-off places – but a shoot-out loss at Metallurg Novokuznetsk leaves the Vladivostok team just one point ahead of Avtomobilist.

However even that point looked out of reach after a 3-1 first-period lead turned into a 3-4 deficit by the midway point. It wasn’t until the last moments that Shaun Heshka tied it up at 4-4 with just 30 seconds to play.

That wasn’t enough to inspire a win, though. In the shoot-out Niklas Bergfors and Alexander Komaristy traded goals, just as they had in regulation, before Ryan Stoa got the winner.

Valuable points shared in Nizhnekamsk
Yegor Milovzorov handed Neftekhimik a shoot-out win at home to Lada following a 3-3 tie. The home team was close to victory in regulation, but Denis Golubev tied it up with 1:34 left to play. Splitting the points does little to help either team in their battles to gain ground on the play-off contenders.