Sibir back in second. January 27 round-up

Sibir returned to second place in the Eastern Conference with a 2-1 victory at home to Admiral, while leaving its opponent outside of the top eight as the regular season enters its final stretch.

For long periods there was little between these teams with Admiral fighting hard for every point in its duel with Avtomobilist for the last play-off berth and Sibir eager to get ahead of Avangard and claim a seeding for the post-season.

But after two scoreless periods Dmitry Monya finally broke the deadlock to put Sibir ahead with a fine effort. He collected the puck out on the boards and forced his way between two defenders before picking his moment to squeeze a wrist shot inside the post.

Alexei Kopeikin doubled the lead on the power play midway through the third, thumping home a one-timer from the face-off spot off Igor Ozhiganov’s pass and even though Niklas Bergfors got one back for the visitor it wasn’t enough to deny Sibir the win. 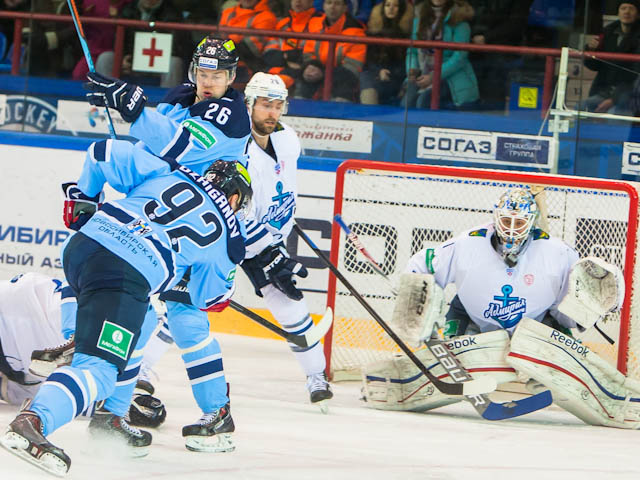 Amur off the bottom
Amur won the battle at the basement, beating Metallurg Novokuznetsk 4-2 to move off the foot of the table.

The visitor made a good start when Mikhail Fisenko put it 1-0 up with a penalty shot in the third minute, but trailed at the first intermission after goals from Mikhail Plotnikov and Ryan Stoa.

Dmitry Tarasov and Dmitry Lugin turned the game around in the middle session before Anton Krysanov completed the scoring early in the third.