The day after the big show saw Salavat Yulaev’s Kirill Koltsov and SKA’s duo of Ilya Kovalchuk and Vadim Shipachyov back in KHL action in another East vs West battle in Ufa. And, once again, the East came out on top as Salavat snapped SKA’s eight-game winning streak, taking a 3-1 verdict.

SKA also welcomed back Artmey Panarin after injury, but it was the home team that made the early running. Denis Tolpeko, an unpredictable talent who seems to be coming into form as the business end of the season approaches, opened the scoring with his second goal in two games. The former Dynamo man has now picked up five points in his last seven outings, a notable upswing after managing just 10 in the previous 37 appearances.

Antti Pihlstrom doubled Salavat Yulaev’s advantage midway through the second, and even though Ilya Kovalchuk fed Dmitry Kalinin for the 2-1 goal seconds into the final session there was no recovery. Alexander Mereskin made it 3-1 in the 52nd minute and that completed the scoring.

The result tightens Salavat’s grip on fifth place in the East, but leaves SKA caught between optimism and alarm. For Petersburg fans whose cup is half full, the team is still in contention to claim the Continental Cup as regular season champion; for those who see it as half empty, Jokerit could yet sneak in to claim top spot in the Bobrov Division and enjoy a seeded spot in the play-offs. 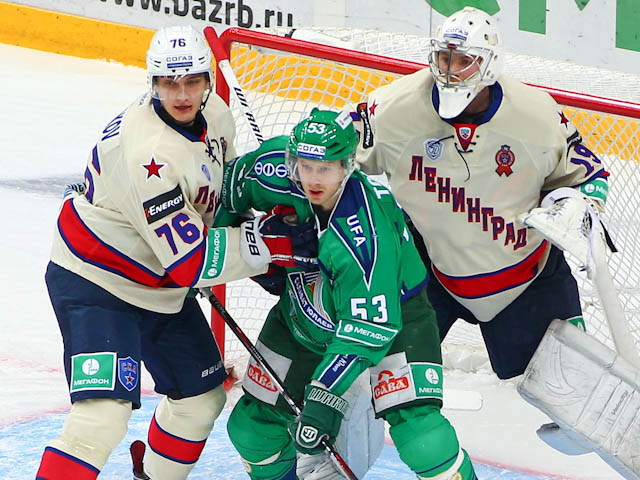 Double double stops Traktor
Two goals each from Pavel Kulikov and Yegor Milovzorov gave Neftekhimik a 4-2 win at home to Traktor. The win keeps the home team’s play-off hopes alive, if not exactly healthy. Traktor missed a chance to bounce back from two straight defeats despite Dmitry Pestunov, Anton Glinkin and Andrei Popov combining for both the visitor’s goals.