On Sunday afternoon, as part of the build-up to the seventh All-Star Game in Sochi, the organizers held a press conference with KHL President Dmitry Chernyshenko and the captains of the competing teams: Ilya Kovalchuk (West) and Danis Zaripov (East). 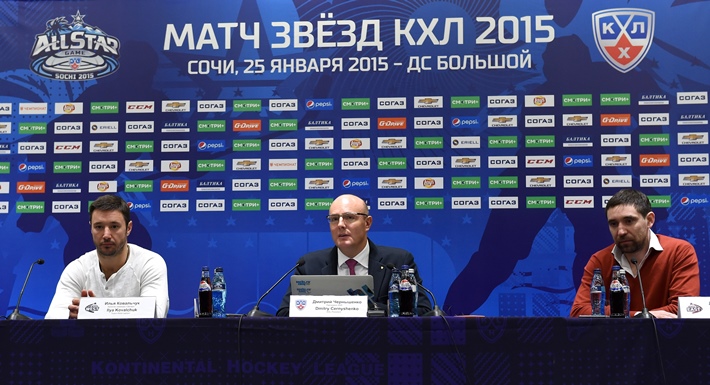 The first to face the press pack was Dmitry Chernyshenko: “It is entirely fitting to give the All-Star Game to Sochi a year after the city’s successful staging of the Winter Olympics, especially considering that the big event’s history started in another world-famous location: Moscow’s Red Square. The broadcasting rights for the 2015 All-Star Game have been bought by more than 15 foreign TV companies to be shown on over 20 channels with coverage reaching at least 25 countries around the world: the USA, Canada, Norway, Sweden, Finland, the Czech Republic, Slovakia, Hungary, Latvia, Lithuania, Estonia, Croatia, Montenegro, Bosnia and Herzegovina, Serbia, Slovenia, Kosovo, Armenia, Kazakhstan, Belarus and others, and we can add a major western European Internet resource to that list.”

“In addition, it would be great in the future to stage a game between the winners of the Gagarin Cup and the Stanley Cup. Unfortunately, at the moment there are still several obstacles in the way: technical difficulties and the different season schedules. The KHL All-Star Game holds up a mirror to hockey in our country. The League is in good shape and the financial situation is stable. No fewer than eighty-two KHL players competed in the Olympics, and Ilya Kovalchuk alone has four Olympic Games under his belt. Sixty-five players from our League have won gold at the World Championships - Zaripov and Nikulin have each won it three times. A month from now the playoffs begin, and in the Western Conference there is a really fierce battle to qualify. There is a similarly tough four-way fight for first place in the East, and it is still impossible to predict with any certainty which teams will make it to the playoffs.”

“A question from Slovakia: what is the League’s position regarding Slovan? Will the club still be in the KHL next season?”
“Our position is simple. There are rules and requirements in place for participating clubs. To date, we have received no signals from Bratislava saying the club might withdraw from the KHL. We welcome the presence of such famous and popular European clubs in the League and we want them to stay. The one new development, concerning financial uncertainty, is that we now demand stricter discipline and more thorough checks on the clubs’ financial health, so as not to let their fans down. We keep a close watch to ensure the clubs meet their obligations to their players and we intend to prevent possible violations, so we will tighten our requirements for the clubs to submit financial guarantees before the season. The written guarantees submitted by the clubs will have to be supported by relevant and legally binding documentation.”

“In 2016, Omsk celebrates its 300th anniversary, and the Regional Governor, Viktor Nazarov, would like the city to stage the Channel One Cup. What is your view?”
“I won’t comment on matters outside my jurisdiction. But on the subject of host cities, I’d like to enliven the selection procedure for the All-Star Game venue. I suggest the candidate cities should compete in the way they do for the Olympics, where they present their bids and we can discuss them and vote for them.”

“It’s almost a year since the Sochi Games. Is the Olympic legacy still strong?”
“Undoubtedly. We love every inch of the Bolshoy Ice Dome and indeed the whole Olympic complex.”

“You have said that the 2016 season will begin on the 22nd of August. Is it not too early? Many of the owners, sponsors and fans will still be on vacation.”
Chernyshenko: “Firstly, try visiting Sochi or St. Petersburg in August and you’ll see crowds of people. When devising the schedule, we must consider the international break, and also take into account the interests of the clubs, so that their players have good working conditions. The 22nd of August is not yet the definite start date, but if we keep twenty-eight clubs in the League, and we all hope to do so, and if we want the clubs to each have at least sixty games, then the 22nd would be an appropriate date to begin the Championship.”
Kovalchuk: “For me, the more games we play, the better it is. I am prepared to play 80 games per season. Every game is a special occasion.”
Zaripov: “You might be prepared, as you’ve played in the NHL, but it would be strange for many of us. Starting in August is a good idea, but we need to organize the season breaks correctly, so we have some time off. We didn’t even celebrate New Year in the traditional way, as we were back in action by the 3rd of January. We need an easy schedule. Let starts the season earlier, even though it means an earlier start to preseason training, so we’ll have a shorter summer vacation but some time to have the rest which sportsmen need after many tough games.”

“What, in your opinion, is the best method of choosing players for the All-Star Game? Should we have a player from each team, or should we let the League choose the rosters?”
Zaripov: “We should have a different format each year, although the main thing is that the fans and coaches play a part.”
Kovalchuk: “A draft would be an interesting idea.”
Chernyshenko: “It would certainly be interesting to add a bit of intrigue to the selection process.”

“Ilya, you have played in the NHL and KHL All-Star Games. Is there much difference?”
Kovalchuk: “I would like Russia to have the attitude they show in North America, where it is considered a great honor to go to the All-Star Game. In the NHL the event has great prestige and commands deep respect among the fans. It is very important to have all these stars gathered here - the best of the best. It is only the seventh time the KHL has staged such a game, whereas in the NHL it is a long-standing tradition, and I’d like to see the KHL’s version reach that level. The main thing is that the finest players come and take part if the fans have selected them.”

“What is your reaction to the revival of the World Cup, which will be held in Toronto in 2016?”
Chernyshenko: “For Russians, the main event of 2016 will be the World Championships, which we’ll be hosting, and where we’ll need to show the same spirit of national unity as during the Olympic Games. We will always devise the season schedule with the interests of the national team in mind, so if the guys in charge of Team Russia decide that we should compete in the World Cup, we will re-arrange the schedule.”
Kovalchuk: “I once played in the World Cup. It’s a worthy tournament, where everything is getting better and I’m really looking forward to it.”
Zaripov: “I’ll show everyone that I deserve a place in the roster for the World Cup. If the coaches select me, I will be more than happy.” 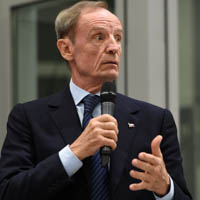 Another famous face at the press conference was the KHL All-Star Game guest of honor – the three-time Olympic alpine skiing champion, Jean-Claude Killy. He said it was his seventh visit to Sochi since the Olympics, and that the infrastructure built here on the Black Sea never ceases to amaze him:

“I am sure that the sporting facilities in Sochi will enjoy many more years working for the good of the sport, and they will produce new stars. All the funding which went on preparing for the Olympics was money well spent. New bridges, tunnels, roads and railways were built in the city, and these projects deserve the highest praise. The main goal was reached - Sochi staged the best Olympics in the history of the Games. The world of sport is very grateful to Russia for all that she has achieved in Sochi.”
#ASG