Denis Parshin inspired a dramatic recovery for Avangard to help salvage a point against Salavat Yulaev, but it wasn’t enough for the Omsk team to win the game.

The Eastern Conference high flyer seemed to be down and out when it trailed 1-4 just after halfway, but Parshin scored two goals late in the second period to reignite his team’s chances.

Then the forward provided an assist, breaking up an attack in his own zone and launching a shorthanded counter that ended with Denis Kulyash making it 4-4 with just 41 seconds left to play and Avangard a man down until right before the hooter.

The change in momentum wasn’t enough to deny Salavat Yulaev, though. Avangard was thrown on to the back foot in overtime when Alexander Perezhogin was sin-binned, and even when back to full strength the visitor remained on top and was rewarded by a fine individual goal from Denis Tolpeko to seal the win.

Earlier Vladimir Sobotka had given Avangard the perfect start with a goal after just 33 seconds, but Salavat Yulaev hit back thanks to its Slepyshev-Makarov-Hartikainen line. The trio combined for two goals in three minutes, with Anton Slepyshev and Teemu Hartikainen finding the target.

Dmitry Syomin and Kirill Koltsov stretched the lead to 4-1 midway through the second session before Parshin got his game on to set up a tense finale. 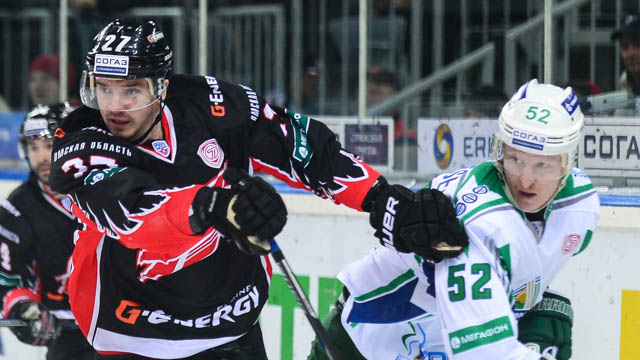 Amur fights back to sink Admiral
Admiral’s hopes of plotting a course into the play-offs were dealt a blow by a late revival from Amur in Vladivostok.

The home team was leading 4-2 in the latest edition of the Far Eastern derby and seemed set fair for a win that would see it close in on eighth place. But in the last three minutes Amur – winless in seven ahead of this game – produced a stunning recovery and went on to win the game in a shoot-out.

It all started when Alexei Ugarov took a 5+20 cross-checking major in the 55th minute. Amur took full advantage of the power play, scoring twice in 34 seconds as Dmitry Tarasov and Michel Miklik tied the game in the 58th minute. Tarasov went on to pot the decisive shot, while Alexander Pechursky made two saves in the shoot-out.

Earlier the teams traded goals freely in the first two periods, but Ugarov and Andrei Sigaryov seemed to have given Admiral a decisive advantage as the third period wound down. However, Ugarov’s penalty turned the game upside down – and may yet sink Admiral’s play-off prospects.